Lunch at L'Image in Preuilly

The rain stopped and we walked the few hundred meters from Susan and Simon's house, down the narrow streets of Preuilly-sur-Claise, to the restaurant called L'Image. Walt and I had had lunch there with S & S back in December.

Before we left, Jean-Luc went down the hill to the car to get the yellow lab named Mo and bring him along. Dogs are welcome at L'Image, as they are in many French restaurants, as long as they are well behaved. Mo is.

I didn't take any pictures in Preuilly. Well, I took only one, and that was outside of the town proper. I took none at the restaurant, which is a very nice place with very good food. When you walk in, you are in a spacious room that has a huge old bar in it, along with some tables. The dining room is off the the right, through a narrow door, and has pink wallpaper. The décor is old-fashioned, as suits a place in a small village out in the country, but fresh and appealing. 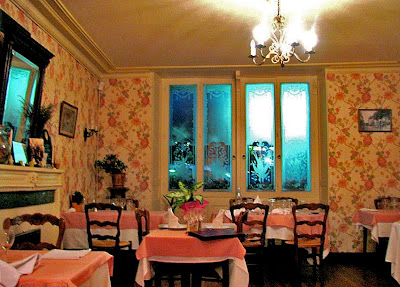 I have "stolen" this picture off Days on the Claise. I hope
Susan and Simon won't mind, given the topic I'm writing.
Susan and Simon have posted pictures of the dining room at L'Image here, on their blog. And here's another topic on Days on the Claise showing the proprietor of the restaurant and the exterior. Our party of five was seated just in front of the window in the photo above.

The lunch was excellent. There's a menu priced at 11.50€ for three courses. Appetizers included an egg dish with cream and pork lardons and a salad of grated carrots with pork rillons, a Touraine specialty. Rillons are chunks of lean pork belly that are slow-cooked in fat and white wine. In France, they say that eating carrots will give you pink thighs (or is that "buns"?), and we joked about that with the people who ordered the salade de carottes râpées. There was a third appetizer but I can't remember what it was.

Main courses included a skewer with three kinds of meat on it — beef, lamb, and pork, I believe. There was also a steak cut from the basse côte of the beef. I had that, and it was a kind of boneless ribeye that I thought was very good. Side dishes included green beans cooked with mushrooms or, of course, pommes frites (fries). There was a third main course dish on the menu, but I don't think anybody ordered it.

For dessert there was a banana mousse with chocolate sauce, which several of us had. There were also the French classics like crème caramel (flan) and floating island. We had a couple of small carafes of Touraine red wine and most of us had an espresso at the end of the meal. The total bill, tip included, came to just less than 15 euros per person.

We did a lot of talking in both French and English over the course of the nearly two hours we spent around the table. S. speaks both French and English — she's lived here for more than 20 years — as do I. Jean-Luc doesn't speak English. Susan and Simon are getting their bearings in French, after having spent only short periods in France over the past three years and having moved here permanently just three weeks ago. 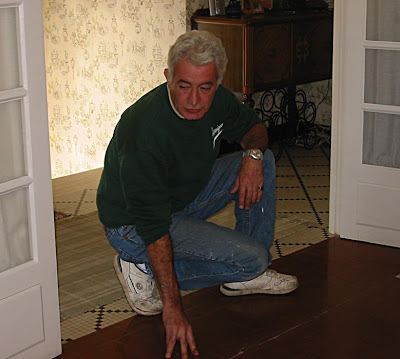 A picture of J-L that I took in 2003, when we were
newly arrived. We met him that first summer.
They described the plans they have for their house, which they will totally renovate over the next months and years. S. and J-L are interested in their project because they have themselves renovated several old stone houses in the Saint-Aignan area over the past few years, including one that they just finished and are renting out as a gîte while they wait for a buyer to come along (the real estate market is slow in France now). Here's a link to the place, which is called La Boulangerie and is in the center of Saint-Aignan.

There was a lot of translating going on as S & S got to know S and J-L. Some of the house renovation and building terms get pretty technical. But we managed to have good conversation and a good lunch all at the same time. It was a lot of fun for me. Jean-Luc is a card and a teaser, as is Christophe, the proprietor of the restaurant, so they were enjoying joking around with each other.

For example, when I ordered my steak and said I wanted the pommes frites with it, Christophe asked, as the waiter always does, « Et la cuisson ? » ("How do you want that cooked?"). Jean-Luc piped in and said "The fries? We'll have those well-done, please." Ha ha ha.

Oh, taped to the mirror behind the bar there was a sheet of paper titled « La Pensée du jour » — The Thought of the Day. It was quote from, of all people, Karl Marx. I don't think you'd ever see that in a small-town restaurant in the U.S. The quote went something like this (it was in French, of course): "A person who wants to organize and accomplish things faces three major obstacles: first, there are the people who want to do exactly the same thing; second, there are the people who want to to exactly the opposite; and third, there is the enormous mass of people who don't want to do anything at all."

After lunch, we walked back up the street to have a good look at Susan and Simon's new old house.
Posted by Ken Broadhurst at 06:52