Veal with Olives is something I made for dinner once before, years ago. It was in California, I think. I don't know where I got the idea or recipe. It was a French recipe, if I remember, called Sauté de veau aux olives. It stuck in my memory because it was so different and brightly flavored compared to the standard Blanquette de veau, in a cream sauce, or Sauté de veau aux légumes, cooked with little spring vegetables like peas, green beans, carrots, and turnips.

I assumed the Sauté de veau aux olives was a Provençal dish because it contained not only olives but tomato, onion, garlic, and thyme. I can't find the recipe from back then, but descriptions that I've found on the Internet point to Corsican origins. 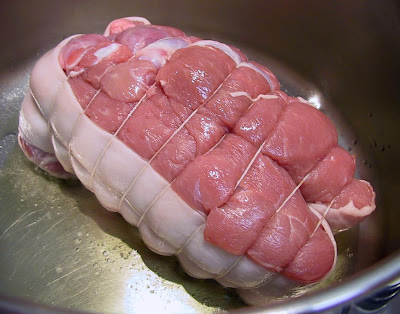 A deboned, rolled, and tied veal shoulder from the supermarket
I'm not sure why, but I started thinking about veal cooked with olives a week or two ago. Well, I had a veal roast in the freezer and some olives in the fridge. I guess that was reason enough.

In fact, veal cooked with all the same ingredients, except the olives, is called Veau à la Marengo. It was something Napoleon's chef created (using chicken, not veal) at the time a battle near the city of that name, in Italy. Or that a Paris chef invented after the fact to celebrate Napoleons victory at Marengo, if you believe other sources. Along the way, Chicken Marengo somehow became Veal Marengo. 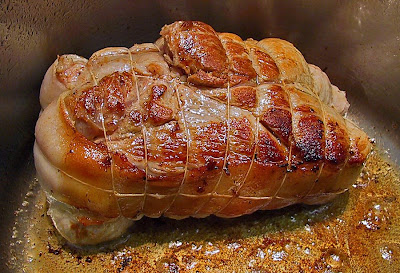 Brown the veal roast or stew meat (or chicken, etc.) in olive oil
And Napoleon was Corsican, as we all know. Napoleon's Chicken Marengo supper, whether in Italy or in Paris, was supposedly garnished with cooked crawfish and fried eggs, so it was fancier. The version I made I made, more family-style, included salt pork lardons and olives, both green and black.

Veal Marenco greatly resembles the Italian dish called Osso bucco, and that's probably not a coincidence. One of my Provençal cookbooks, La Cuisinière Provençale by J.-B. Reboul, includes a recipe called Sauté de veau à la chasseur, which could be translated into Anglo-Italian as Veal cacciatore. We've all had Chicken cacciatore, called Poulet chasseur in French. It's very similar to the Marengo. So I guess the inclusion of olives is what makes this recipe more Corsican and less Italian or Provençal. 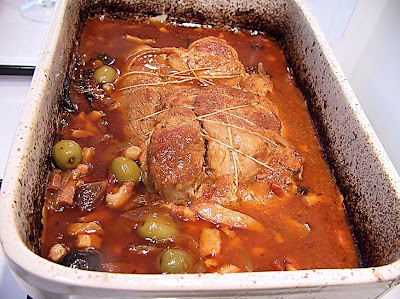 I cooked the Veal with Olives in the oven.
Here's the recipe as I adapted it. The roast I had was a piece of veal shoulder that had been boned out, rolled, and tied. I decided to cook it that way rather than untie it and cut it into pieces. Otherwise, I was inspired by a couple of recipes I found on the Internet, including one on the marmiton.org site. 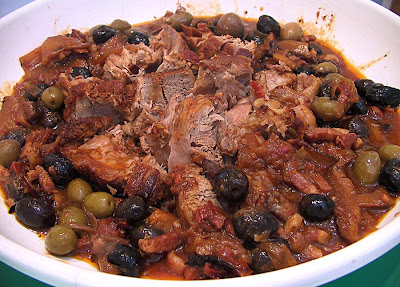 Veal cooked in a light tomato sauce with olives —
untie the roast, discard the string, and cut up the meat for serving.

Sauté the veal roast or veal pieces in olive oil until the meat is golden brown. Take the veal out of the pot and set it aside. Sauté the onion, garlic cloves, and salt pork in the same fat until lightly browned.

Put the veal back into the pot, season the mixture well with black pepper, and pour in the tomato sauce, the stock, and the wine. Add in the dried mushrooms, bay leaves, fennel seeds, and thyme. Don't add salt until later, because the salt pork and olives may make the sauce salty enough.

Let the veal simmer in the sauce for 1½ to 2 hours, uncovered and either in a 325ºF oven or on top of the stove, so that the sauce thickens slightly. (The sauce will end up more brown than red). Add the olives and let it cook another 30 minutes. Add more wine or water to thin the sauce as necessary. 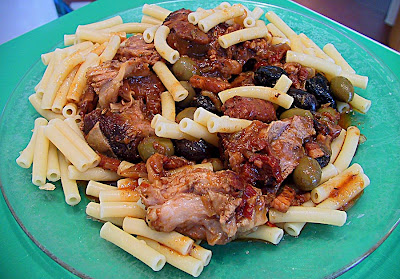 Veal with Olives, served with macaroni
After what I said about cacciatore, it seems obvious that this recipe would be excellent made with chicken, turkey, or even rabbit. With veal, it is excellent. Much of course depends on the quality of the tomato sauce and the stock that you use to make it with.
Posted by Ken Broadhurst at 07:15