Valençay is a town about 25 km/15 mi. east of Saint-Aignan. It's famous for its château and for the goat cheeses and wines made in the surroundings. The cheese is called Valençay, and it's one of the four well-known goat cheeses made in our area, along with Selles-sur-Cher, Pouligny-Saint-Pierre, and Sainte-Maure-de-Touraine.

Valençay goat cheese is especially different from the other four local goat cheeses because of its shape. It's made not in the shape of a log or a disk, but is what they call a pyramide tronquée — a truncated pyramid. In other words, a pyramid that has had its top lopped off. It's been an A.O.C. cheese since 1998. 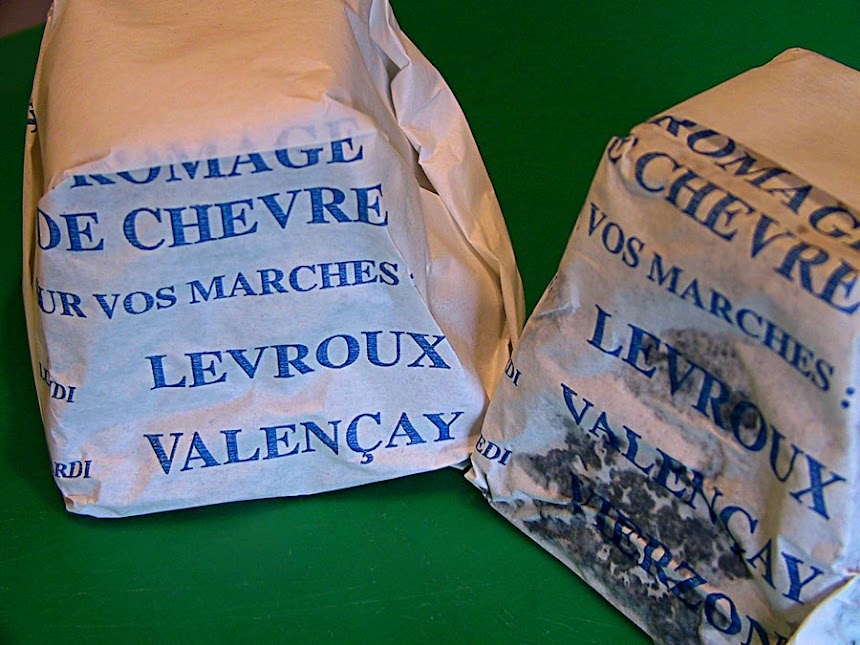 Goat cheeses from Valençay in the Berry region

There's a legend that goes along with the shape of Valençay's cheese. A couple of hundred years ago, Napoleon bought the château de Valençay for Talleyrand, his foreign minister — or at least financed the purchase. It was one of the largest private holdings in France at the time, at about 50 sq. mi. 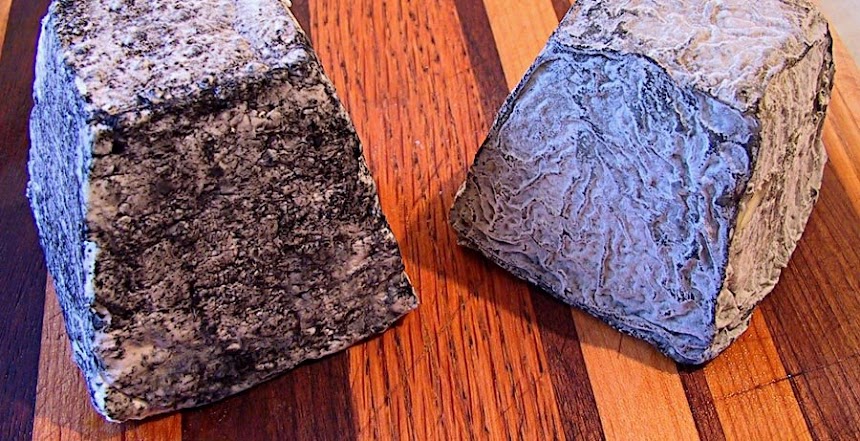 One fresh goat cheese and one semi-dry. The cheeses are coated
with a mixture of salt and wood ash that adds flavor during aging.

Talleyrand was an elegant, well-bred man descended from the highest levels of the aristocracy. He was also an unscrupulous political operator, they say, and Napoleon famously said of him that he was « de la merde dans un bas de soie » — "shit in a silk stocking." 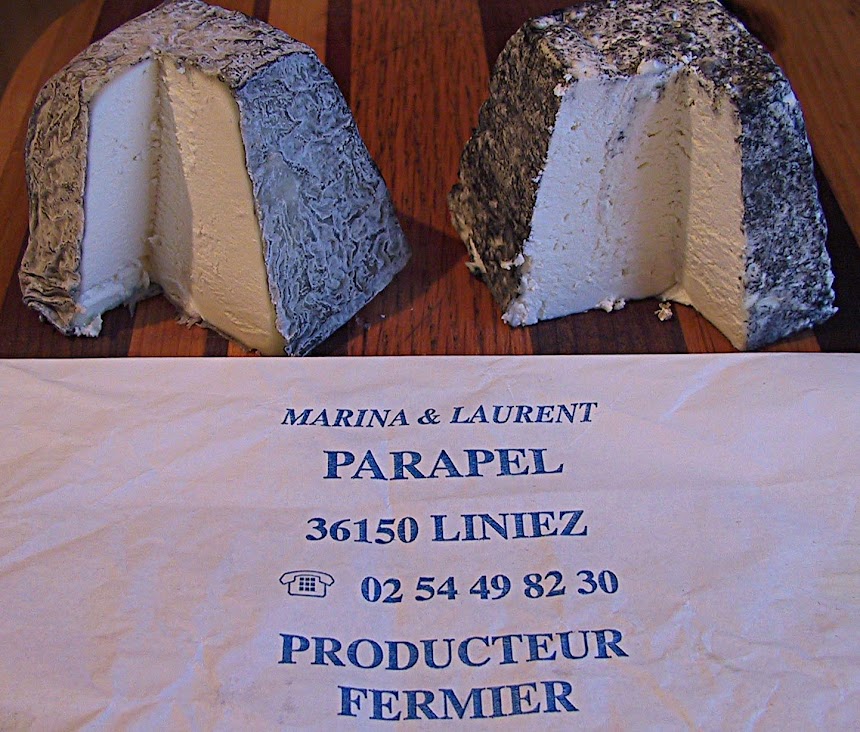 According to the legend, on a visit to Talleyrand at Valençay not long after an unsuccessful military campaign in Egypt, Napoleon flew into a rage when he saw the town's pyramid-shaped cheese. He pulled out his sword and chopped off the top of the cheese, creating the "truncated" pyramid. Of course, it's just an entertaining story. 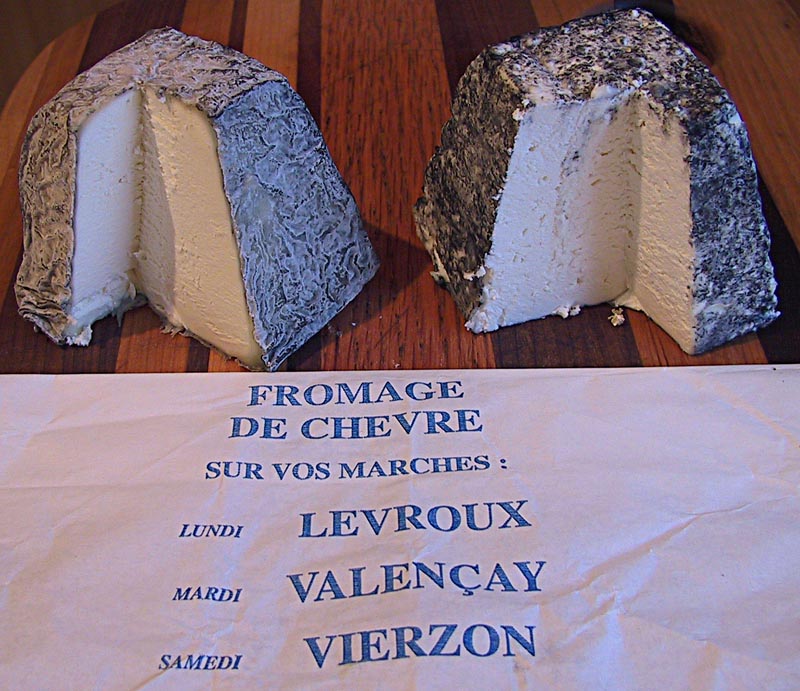 The Parapels sell their cheeses at three markets each week.

Last Tuesday, we drove over to Valençay to buy some supplies at the town's weekly outdoor market. A chicken, some asparagus, half a dozen sausages, and of course a couple of Valençay cheeses. We bought the cheeses at a stand set up inside the market hall on the town square from Mr et Mme Parapel, who come to the market from the village of Liniez, near the town of Vatan. 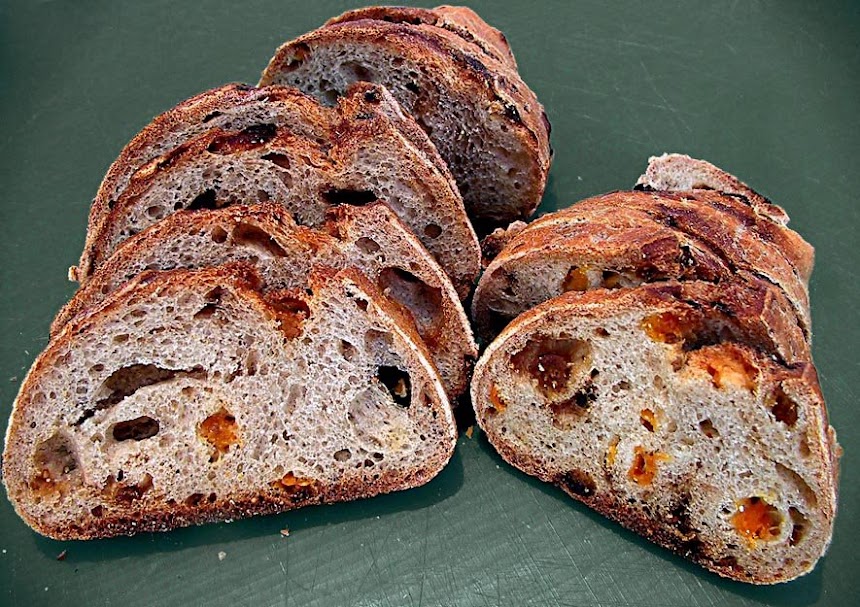 Apricot-fig bread is good with the local goat cheeses.

To go with the cheeses, one fresh and the other semi-dry, I drove up to the bakery in the vineyard a couple of miles from our house and bought a loaf of bread that has dried apricots and dried figs cooked into it. It was really good with the goat cheese and a glass of the local white wine.

If you've tried goat cheeses from elsewhere but aren't convinced you are a fan, you really need to try Valençay or Selles-sur-Cher. They have a mild, flowery taste that will surprise you. Start with a chèvre frais, a goat cheese that has not been aged for very long. It has the cleanest, mildest taste.
Posted by Ken Broadhurst at 07:40