Here's an idea for a good apéritif finger-food that's unusual. If you're not in France or Belgium, though, you might have to make your own céleri rémoulade, which is grated celery root with a mayonnaise dressing. In France, you can buy the salad in charcuteries and supermarkets.

The idea is to roll thin slices of smoked salmon around a filling of the celery root salad. I'm thinking you could use egg salad, for example, as a substitute. Or potato salad, if you cut the potatoes very small or mash them slightly. I'm sure there are other possibilities. Maybe cream cheese and olives. Cut each rolled, filled salmon slice into bite-size pieces. Use toothpicks to serve them. 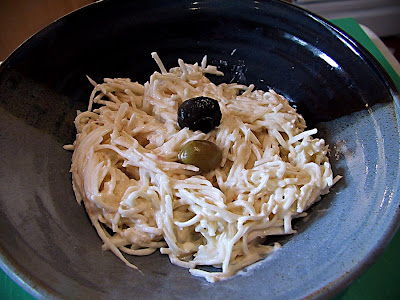 Salade de céleri rémoulade — those are olives on top
If you want to make céleri rémoulade, you need to buy a fresh celery root, peel it, and shred or grate it into long julienne strips. It's good to blanch or salt the strips to tenderize them — but it's a lot of trouble and not absolutely necessary. Then toss the shredded celery with a dressing that is half mayonnaise and half crème fraîche (or sour cream), perked up with a good quantity of Dijon mustard (here's a later post about making céleri rémoulade). Thinking back, I remember that I could sometimes buy shredded celery root in jars in the canned vegetable section of a couple of supermarkets in San Francisco... 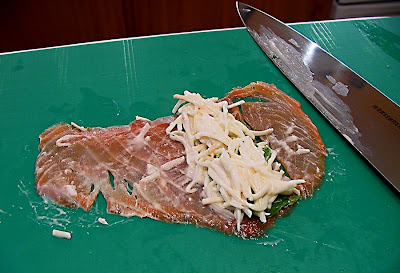 This looks kind of messy (it's along story) but gives you the idea.
The idea for the salmon-celery salad roll-ups (rouleaux de saumon fumé au céleri in French) comes again from French CuisineTV. The woman who prepared them is named Julie Andrieu. Here's a translation of the recipe I found on the Internet (after much searching).

If you want to add an an apple to the celery root salad, peel it and cut it into julienne strips. Mix the apple into the salad. Squeeze on some lemon juice so the apple won't discolor.

Wash the herbs and cut the leaves into smaller pieces if necessary (basil leaves can be pretty big). 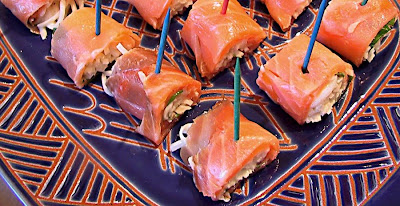 Spread the salmon slices out on the work surface and spoon a line of celery root salad onto them in a line. Place some of the herbs on or under the celery. Roll the salmon slice up into a log shape. Stick toothpicks into the salmon slice to hold the roll together and then slice between the toothpicks with a very sharp knife to make bite-size morsels.

Chill the roll-ups and squeeze on a few drops of lemon juice at serving time. 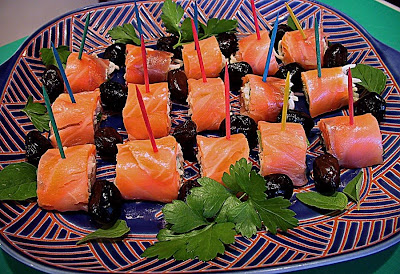 Serve the salmon rollups with olives and a dry white wine
(preferably a Touraine Sauvignon) or a dry rosé.

We had these salmon roll-ups as a pre-dinner nosh with our friends Leesa and Alex on Thursday. They were a big hit. Walt has some pictures in his post today. By the way, foie de morue is cod liver, and it's delicious spread on toast and "seasoned" with a few drops of lemon juice.
Posted by Ken Broadhurst at 08:47