Do you remember that old Alan Alda movie called The Four Seasons? Carol Burnette, Rita Moreno, Sandy Dennis, and Jack Weston were in it with Alda. It's about three couples who take vacations together in different seasons.

Sandy Dennis plays a woman who gets dumped by her husband. In the film she's a photographer — "a fidgety photographer" according to a NYTimes review I looked up to make sure Alda's was the movie I was thinking of — who seems obsessed with taking close-up pictures of vegetables. I remember that I thought that was a strange obsession to have. Sandy Dennis was an actress who always looked like she was about to burst into tears or throw up, anyway (but I liked her). 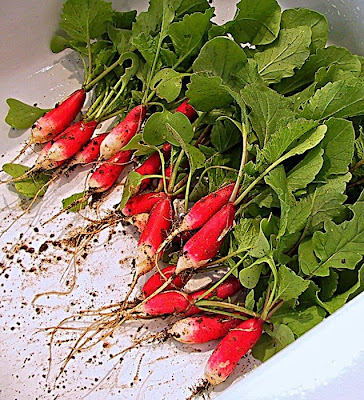 Radishes fresh from the garden
Well, sometimes I think I've turned into her. I hope I'm not that fidgety. Her vegetable obsession was supposed to be some kind of mid-life crisis, I think. Well, I'm well past mid-life. So what's my excuse?

I guess actually growing vegetables has something to do with it. Right now, it's radishes, as you can see. They are very easy to grow, and you can plant them early in the season. These took about four weeks to develop into something edible. They will be finished in time for us to plant more, or something else, on the same plot by the end of May. 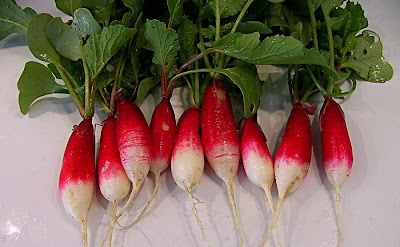 You can see how nice the radish tops are.
As you know, in France people mostly eat radishes with butter and salt: butter spread on French bread and radishes dipped into a pile of salt on your plate. Radishes are a food you eat with your hands. Don't dry them off after you wash them; the moisture makes the salt stick to them. They are very good eaten this way.

Once when my mother came over here, we stayed with some old friends of mine in Normandy. For the first dinner, J. brought out a big dish of radishes with the butter, bread, and salt to accompany them. We all ate some. The next day, the same radishes (or the rest of them) came to the table again at lunchtime. And the third day, ditto. 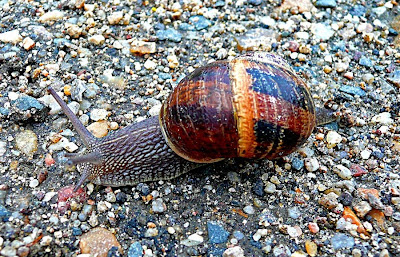 A snail making a bee-line for the radishes. Luckily,
I was able to catch him before he got to them.
My mother thought it was funny that the same appetizer was served three days in a row. But that's what people do, in my experience. Once you've bought radishes, you have to eat them up. They are one of the first fresh new vegetables of the year.

This big red slug was headed in the same direction.
Did you know you can eat the greens too? The most common way is to make them into a pureed soup — a potage or a velouté. The radish tops we are getting now are so beautiful I can't bring myself to toss them into the compost bin. I'm saving the most perfect leaves as we eat the radishes. 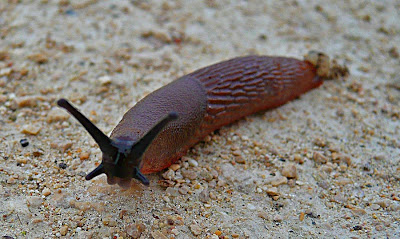 When I cut him off at the pass, he seemed almost menacing...
Often the greens on radishes you find in the markets or supermarkets are wilted and turning brown. They're not appetizing. Once though, I got some really fresh green ones and made radish-top soup. It just just okay, I thought. I guess I should try again.

Meanwhile, on the web yesterday I found a recipe for a salad of radish tops and jambon cru — French prosciutto — specifically, jambon de Bayonne from SW France. So I'll have to go to the Saint-Aignan market tomorrow and get some good ham from Mme Doudouille. I can't go shopping today, because it's May First and everything is closed for the holiday.
Posted by Ken Broadhurst at 08:50