We had a nice trip to the outdoor market in Valençay yesterday morning. Valençay is a little town with a big château — a château that Napoleon bought for his powerful foreign minister, Talleyrand, in the early 1800s. Part of the château complex dates back to the 1500s, and the gardens there are beautiful.

Valençay is about 10 miles east of Saint-Aignan. Its market day is Tuesday (Saint-Aignan's weekly market is set up on Saturday mornings). Valençay is famous for a goat cheese that goes by the same name, and that was one of the things we went to buy. I'll post a picture later. 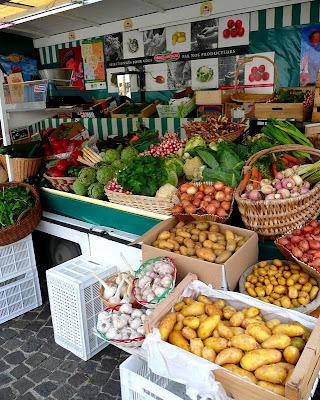 A produce vendor's stall at the Valençay market
We are having company on Thursday and we want to prepare a meal featuring some of our local products. That means local wines, of course — we figure at least one Touraine Sauvignon (the A.O.C. white), one Touraine Côt (the most lusty of the local reds), and maybe a Vouvray or two, since we have some sparkling and a dessert wine from there in our pantry. It also means goat cheese, and why not a few asparagus spears? 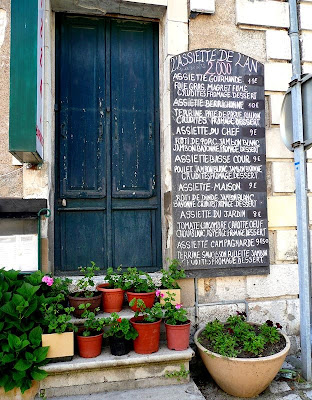 Valençay restaurant menu
We also bought a chicken (a 5½-pounder — huge), a few sausages, some smoked salmon, and a céleri remoulade salade. The chicken and sausages will be our main course, along with pasta and pesto. It will be a pesto we made using radish greens instead of basil leaves. More about that later, after the event. More about the salmon and celery root later too. 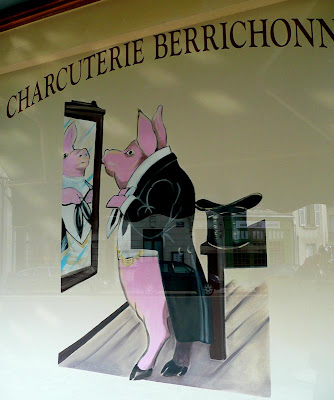 Valençay is in the Berry region and this
charcuterie features local pork specialties.
I took a few pictures in Valençay this morning, but not many. Part of the market stalls are set up inside a building — une halle, a market hall — and it was crowded in there. It wasn't the easiest environment in which to try to use a camera. 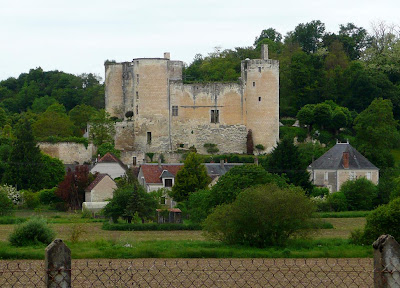 This is the château in the village called Villentrois,
on the road from Saint-Aignan to Valençay.
When I took pictures of stalls outside on the square, two different vendors joked with me about asking for permission first. People in Valençay were in good humor yesterday and there were smiles all around. But it's not yet tourist season so with my camera I stood out like a sore thumb.

By the way, we had nice weather yesterday. It was partly cloudy in the morning, cloudy with a brief shower at noontime, and then bright sunny and warm late in the afternoon. We sat out in the sun and listened to the radio for a couple of hours.
Posted by Ken Broadhurst at 07:20