It's a holiday today in France and other countries — a Catholic holiday called L'Ascension. It's the day on which Christians commemorate the bodily "ascension" of Jesus into heaven, which according to the book of Acts in the Bible happened in the presence of the apostles 40 days after the resurrection.

In France, it's another one of the long holiday weekends in May. It falls on a Thursday, and a lot of people "bridge" the weekend by taking Friday off, so they cn have a four-day holiday. Other May holidays are May 1 and May 8, both of which fell on Fridays this year so resulted in three-day weekends. Toward the end of May or in early June — June 1, this year — is the Pentecost holiday, which is a Sunday. A lot of people take the Monday, le lundi de Pentecôte, off too, so there's another three-day weekend. 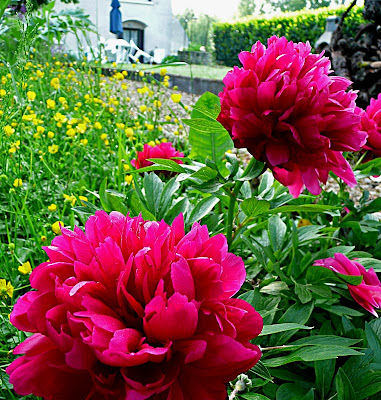 Peonies in the garden with the outdoor table
and our back door as a backdrop.
Tuesday night two freight trains collided in a tunnel near the city of Angoulême, between Tours and Bordeaux. As a result, there were no trains running yesterday morning from Paris to Bordeaux (and points south, including TGVs to Toulouse and regular trains going to Basque Country and the Spanish border). According to reports, the Montparnasse train station was crowded with frustrated travelers, who saw train after train canceled. Traffic resumed, at least partially, in the afternoon. Some trains are running this morning, and the SNCF says it will run extra trains starting this afternoon to make up for the backlog. 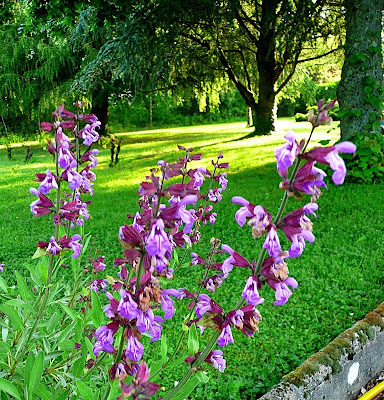 It was sunny and warm most of the day yesterday.
We are having a couple from the Paris area down for the afternoon. We were hoping to be able to spend the afternoon outdoors and to grill chicken on the barbecue. We're still hoping, but the fine rain that is falling right now is making those hopes dim. More about all this tomorrow. Like so many people in France, I think I'll faire le pont — "make the bridge" — by taking tomorrow off too. Right now, it's time to get to work in the kitchen.
Posted by Ken Broadhurst at 08:25