How to prune tomato plants

Jean-Pierre Coffe is a French author, radio and TV personality, and former restaurant-owner. He is known as a passionate defender of “authentic” cooking and natural, healthy food products. He has written many books on the subject of gardening and food, one of which is Le Potager Plaisir (1998) —“vegetable gardening for the pleasure of it” might be a good translation of the title. 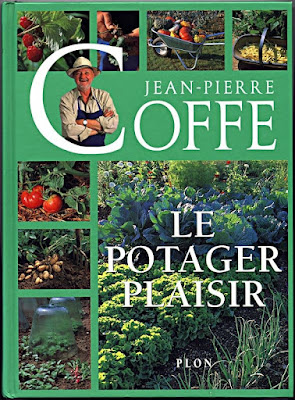 Here is how Coffe says that tomato plants should be pruned. I’ve scanned sections of Coffe’s book and translated them. 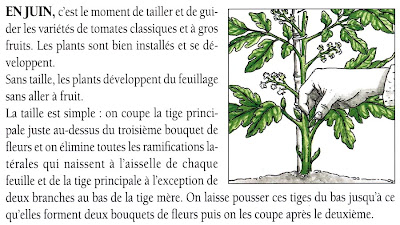 “In June it's time to prune and train onto supports the traditional types of tomato plants that produce big, heavy fruit. By June, the plants are established and growing. If you don't prune them, they will produce a lot of leaves but fewer tomatoes.

“Pruning them is simple: cut the main stem of the plant just above the third cluster of blossoms and, except for the two lowest side branches (called “suckers” in English and les gourmands in French), cut off all the suckers that grow in the crotch between the main stem and and each leaf. Let the two lowest branches grow until they produce two clusters of blossoms, and then cut them off too.” 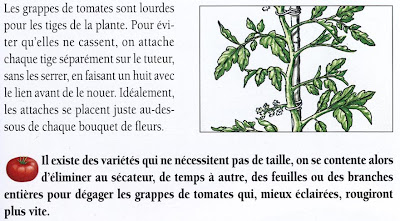 “The clusters of tomatoes are heavy for the size of the plant. To keep the stems from breaking, attach each one separately to a stake or other support, but not tightly. Make a figure-eight with the string or wire before tying a knot in it. Ideally, a tie should be place just above each flower cluster.

“Note that there are varieties of tomato plants that do not need to be prunes. With those, you just cut back leaves or entire branches from time to time so that the tomatoes are exposed to the sun, where they will ripen more quickly.” 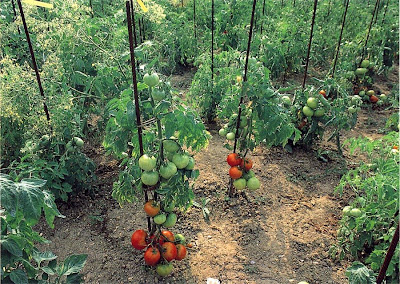