Here's another classic French recipe: Beef Braised with Carrots. It's kind of a variation on Beef Burgundy — bœuf bourguignon — made with white wine instead of red wine. And carrots, of course. You'll also find recipes where the bœuf aux carottes is made with red wine.

This is kind of a wintertime dish, but then the weather here is not all that hot yet (and may not get really hot all summer). One of the things I liked about living in San Francisco, by the way, was that the weather was rarely hot and you could eat wintertime foods and dishes all the year around. It's kind of the same thing here in Saint-Aignan, but with less fog and wind. 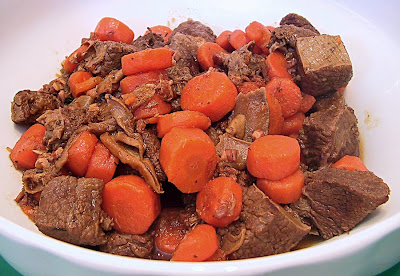 Bœuf braisé aux carottes
Beef braised with carrots (and onions and mushrooms)
Spring is a good season for carrots, though, and they are inexpensive. I had bought a 2 kg bag of them for less than 1.50€. And I had beef in the freezer. Some recipes call for braising one big piece of beef, and other call for cutting the beef into chunks of various sizes. The beef I had was some that I had trimmed up and cut into 1" cubes before freezing it. 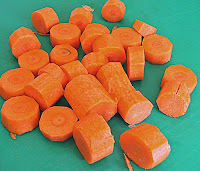 The other ingredients are onions (to taste, I'd say), diced or sliced, and mushrooms, sliced. You can use dried mushrooms or fresh ones. Then herbs and spices, as you like: thyme, bay leaves, parsley, rosemary, or oregano would be good. Red pepper flakes, black pepper, and allspice are also good additions. Don't overdo the spices and herbs. What you want at the end of the cooking is the taste of beef and carrots, only slightly enhanced by other flavoring ingredients. 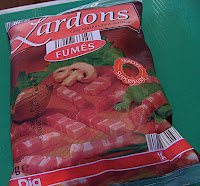 And there's another optional ingredient, which I included because I had a package in the refrigerator that needed to be used — smoked pork lardons. Pork enhances the taste of beef and the smokiness is good too, but it's really optional.

Choose thick sliced bacon and cut it into small pieces if you are shopping in America. If you can find slab bacon or smoked pork belly, that's even better. 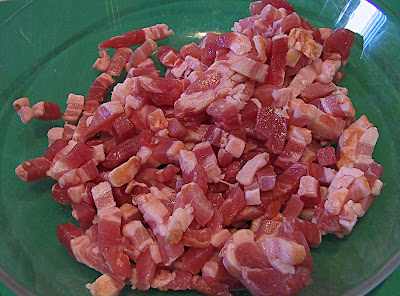 Lardons fumées — smoked slab bacon cut into small pieces —
are often added to a braised dish made with beef or chicken
The first step is to brown the meat in butter or oil. Do it in batches if your pan isn't very big, because you want to sear the meat, and it won't get seared if the pan is crowded. After you've browned all the beef on all sides, take it out of the pan and sauté the onions and (optionally) the lardons together. When the onions are starting to brown, add the beef back to the pan. Add the carrot rounds (or whatever shape you want), the mushrooms, the herbs and spices, and the liquid. 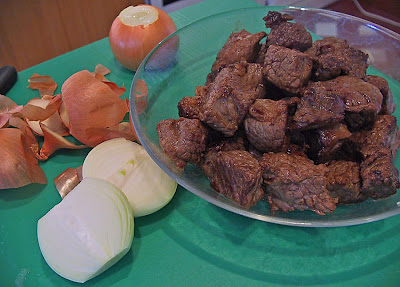 Brown the beef in oil or butter before you braise it in liquid.
The liquid normally includes dry white wine. For each pound of beef, you need a cup of wine. Then add enough beef or chicken stock, or water, to just barely cover the ingredients. Bring it to the boil, lower the heat, and cover the pot. Let it cook for two to three hours at a low simmer, covered, until the beef cubes and the carrots are tender. 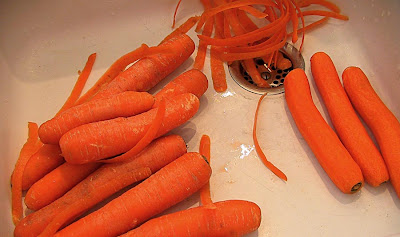 Carrots are plentiful and inexpensive in springtime.
I used dried boletus mushrooms (those are porcini, I think). You don't need to soak the mushrooms beforehand because they will just soften up in the braising liquid and give their flavor. The same is true of fresh mushrooms, but you might also want to sauté them before you put them in the liquid to give them good color and texture.

Again, this is classic French country-style cooking. It's the kind of food you might get in a Paris brasserie or bistrot, or in a truck stop in the countryside. It's home cooking and would be a good Sunday dinner. It's called a plat cuisiné — a cooked dish — or a plat mijoté. Mijoter means to simmer or stew. 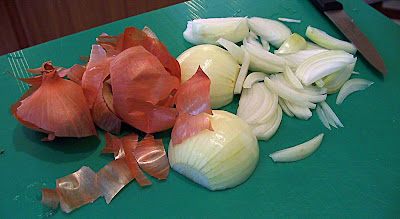 You can never do without onions in a stew.
Serve the braised beef and carrots with pasta, rice, or boiled potatoes. Sautéed potatoes are an option, or even French fries. And then a green salad. And some bread and red wine.

And remember that plats cuisinés are often even better as leftovers a day or two after they have been cooked. That's why I make them in fairly large quantities. We're having this for lunch today after cooking it and eating some of it on Saturday.

By the way, this was one time when I wasn't able to use my favorite cookbook's recipe. That would be Monique Maine's Cuisine pour toute l'année. MM's recipe called for adding a calf's foot (un pied de veau) cut in half and a couple of big sheets of pork rind (couenne de lard) to the pot. That would give the sauce a nice rich texture and flavor, but I didn't have those ingredients on hand this time.
Posted by Ken Broadhurst at 08:57