We had a very hot afternoon yesterday, and then a thunderstorm rolled in. At first it was gentle rain with rumbles of thunder. It was nice. We moved inside and sat on the front terrace just watching it happen.

Then the thunder got louder and we had several sharp bolts of lightning. That's when the ice started falling. At first it was pea-size hailstones. Then they were marble-size. I decided I'd better put the car in the garage so it wouldn't end up pock-marked. I got soaking wet. 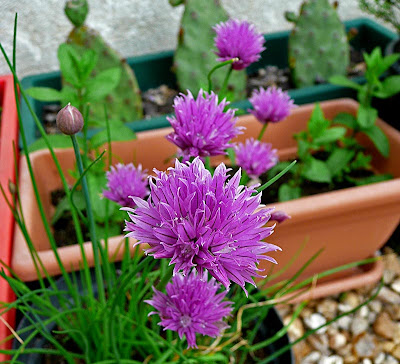 Chive flowers
As soon as the car was inside, the hail stopped. And then the rain. Walt went out and inspected the 30 or so tomato plants he had just finished setting out alongside their stakes. No damage. Whew.

This morning our DSL service went dead. I don't know if the outage was storm-related. Probably. It hardly ever goes out like that. I called France Télécom's customer assistance number, and after waiting on hold for nearly 15 minutes I learned that the outage was affecting our whole area, not just us. At 11:00 a.m., it came back on. 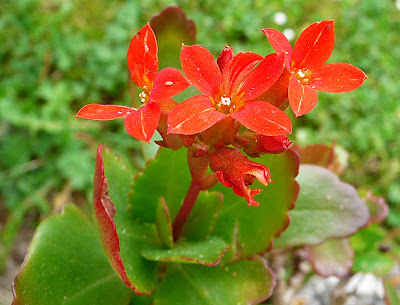 Kalanchoe flowers
New friends of ours, Americans who live in Scotland, have been here this week. On Monday we went to their gîte and had dinner with them. They served excellent food and wine. This morning I saw them again, and they told me that they have found a house to buy a few miles east of Saint-Aignan, and they've signed the papers. New neighbors! 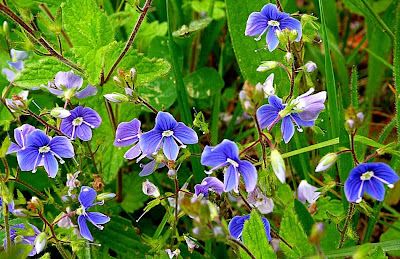 Little blue wildflowers that I haven't yet identified
This morning we drove up to Saint-Romain, a wine village, because the cooperative up there is having its annual « Portes ouvertes » weekend — "open doors," meaning an open house. We tasted some 2007 and 2008 wines, both white and red. In fact, there was also a rosé.

I bought some Chardonnay (a local wine called a vin de pays because Chardonnay is not an A.O.C grape here in Touraine) in bulk, which we will bottle up, and a few bottles of a 2007 Côt (a.k.a. Malbec) that I thought was especially good. 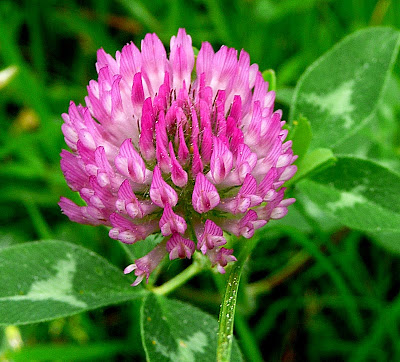 This is a clover, no?
As part of the open house, local Saint-Romain farmers had set up stands to sell some of their products. There were strawberries (of the Gariguette variety) for 2€ a basket, and white asparagus for 4€ a kilo. Good prices. And goat cheeses for 2€ each. I couldn't resist any of that. There was also local honey and jam, but those I did resist, since we have many quarts of my own jam in the pantry.
Posted by Ken Broadhurst at 12:00