A few days ago, I took my neighbors M and B some tomatoes — both red ones and yellow ones. Walt asked me what they thought of the yellow ones, and whether they had ever seen tomatoes like those before. I didn't know because the neighbors hadn't opened the bag immediately.


A couple of days later, I got a phone call to thank us for the tomatoes (and a couple of zucchini). I asked M what she had thought of the yellow tomatoes. I'd never seen tomatoes like that before, she told me. They are delicious, she added. Elles fondent dans la bouche. They just melt in your mouth. 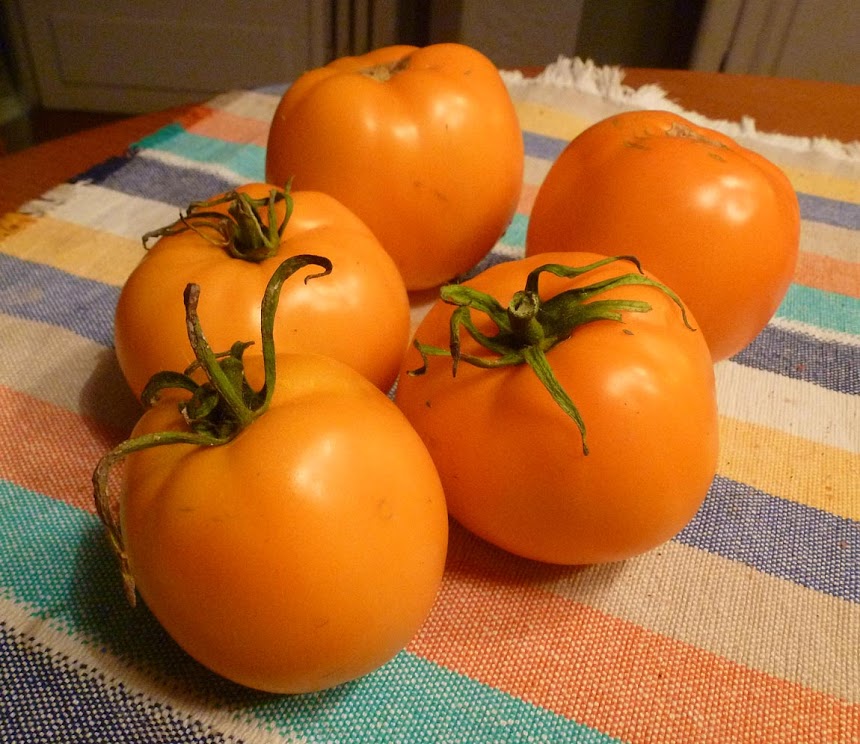 I believe the first time I ever saw and tasted yellow tomatoes was back in the early 1970s when I moved to Illinois to go to graduate school. I don't remember them earlier than that, when I lived in North Carolina. A few years back, friends who live near Urbana and the University of Illinois campus gave us some seeds they saved from yellow tomatoes they had grown. We planted them here in Saint-Aignan and they were really good.


I'm not sure I've ever seen yellow tomatoes in France, either — at least not around Saint-Aignan since we moved here 14 years ago. The ones we grew this year are of the variety called Jubilee. The Ferry-Morse seed packet says, accurately: "Golden-orange fruits have a mild, non-acid flavor. They are large, globular and smooth with a meaty thick-walled interior. Few seeds."
Posted by Ken Broadhurst at 06:30