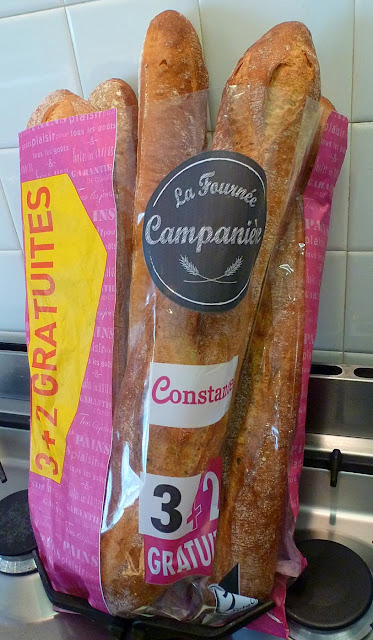 Yesterday I bought bread at the Intermarché supermarket across the river in Noyers-sur-Cher. I had seen it advertised in the store's weekly flyer, and there it was. It's worth a try, I thought. I've bought bread there before, and at SuperU — pain aux noix (bread with walnut pieces in it), pain de campagne ("country-style bread" because the village baker doesn't make it), pain de mie (sliced sandwich bread, which the village baker also doesn't make, as far as I know). But not often.

I didn't look at the ingredients in the Intermarché bread until I got it home and spent time examining the package. I was pleasantly surprised. No preservatives, gums, or chemical emulsifiers are listed. I learned too that the bread is baked in the store daily (cuit sur place tous les jours), which obviously means that the dough is not made by the people who bake it. It's probably brought in frozen, but I can't swear to that.

The village baker is an artisan boulanger, which means he makes his own dough every day and bakes it himself. The ingredients listed on his bread wrappers are flour, yeast and/or sourdough, salt, and water. Of course, it doesn't say what flour or flours are used.

The Intermarché bread is on sale at a special price right now. If you buy three baguettes, you get two for free.  The price? For five baguettes, you pay 2.50€. Compare that to the baker's price of 1.10€ per baguette, or 5.50€ for five. I think the supermarkets — SuperU in Saint-Aignan has similar bread at similar prices — are really going after the local bakers. There's also a new chain restaurant over in Noyers called Patàpain that specializes in bread, other baked goods, pizzas, and salads. That's more competition. 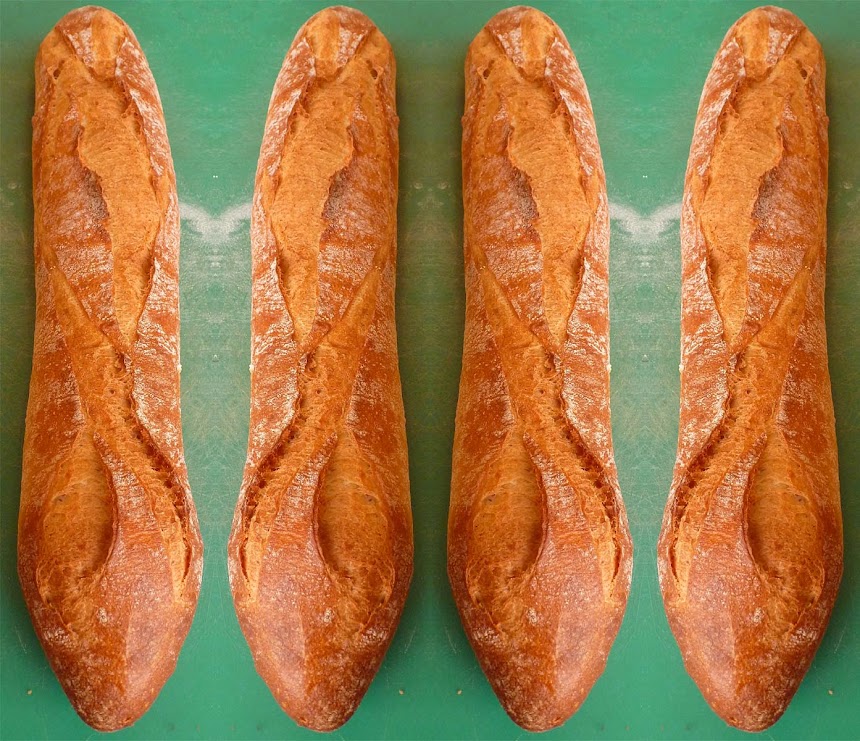 This is a tricked-up picture. It's the same baguette four times.

As I've said before, people's preferences in bread are very personal and subjective. A lot of older people around here grew up eating baguettes ordinaires, which are, like this supermarket bread, what they call pain industriel in France. It is softer and whiter than what now is called pain de tradition and doesn't have the same flavor. But it's what many bread-buyers want. This supermarket bread is much more in the traditional style, but it's still industrial. And to tell the truth, it's pretty good. We ate one of the loaves yesterday and the other four went into the freezer.
Posted by Ken Broadhurst at 06:30