C'est la fin des haricots. That's a funny expression in French. It means "that's the end of the beans" literally. The French-English dictionary says it means "that's the last straw," but that doesn't sound right to me. The last straw is the one that broke the camel's back. I think "the end of the beans" in French usually means something like "it's all over but the shouting" or "we've hit rock bottom." If you don't even have any beans left, that means there really is nothing left to eat. In this case, c'est la fin des haricots means that my bean-cooking experiment is done, and it ended in a tie. No winner. No loser.


Well, actually, I think I'm the winner, because the beans called haricots beurre or "pink beans" that I cooked over the weekend seem nearly perfect to me. The are tender, including the skins, and they didn't break apart or turn to mush in the cooking water. I've already enjoyed eating some of them as a side dish with a grilled duck breast (filet de canard). I've put half of what was left into the freezer. Now I think I'll make Boston baked beans with the other half. Walt and I both like baked beans. 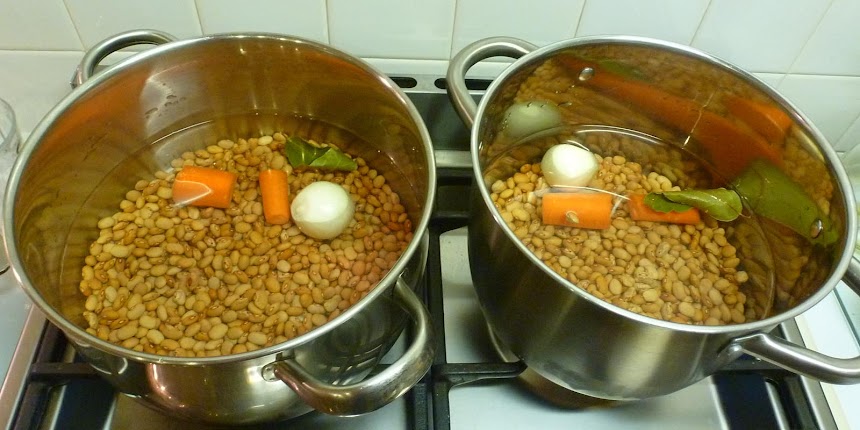 So the experiment was to cook two batches of dried beans, one in distilled water (eau déminéralisée) and the other in spring water (eau minérale). I used beans from a one-kilogram package, and I cooked 500 grams of them in one kind of water and 500 grams in the other kind. Before this, I've cooked different kinds of dried beans (white, red, pinto) in our local tap water, which is quite calcaire or "hard," and the results have been fairly mixed. As often or not, beans cooked in tap water end up having tough skins or, if cooked longer, turn to mush. The beans I've had the best luck with have been black-eyed peas. 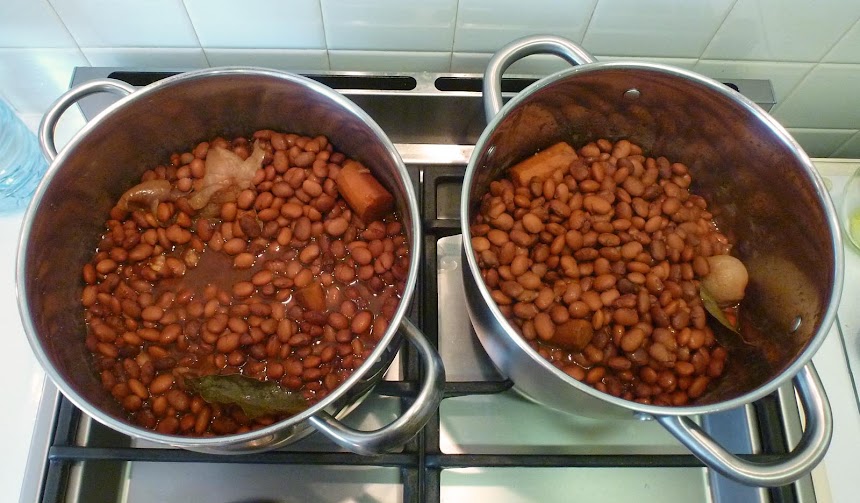 To test the effect of the cooking water on the finished beans, I cooked two batches side by side, seasoned identically — bay leaf, carrot, onion, black pepper, garlic powder — and, most importantly, no salt. I soaked the beans in the water they were going to cook in, but only for about an hour. Then I just put them on to cook in the soaking water. I added more water during the cooking, and I was careful not to get the two kinds of water mixed up. The two batches cooked for about 4½ hours. A ce moment-là — si j'ose dire — les carottes étaient cuites... 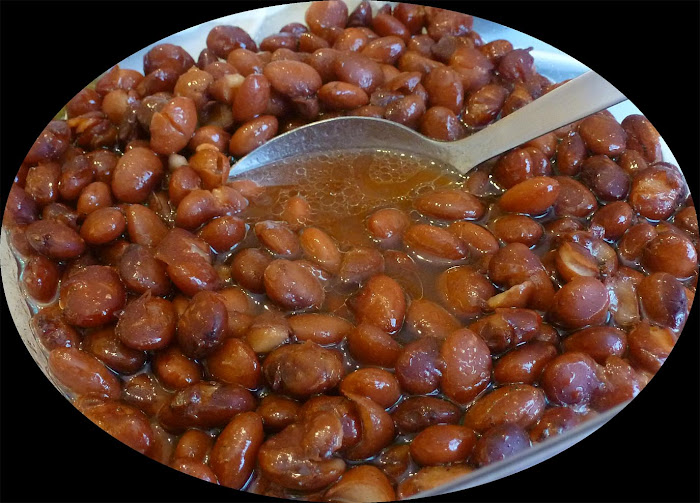 There was virtually no difference between the two batches. I ended up just mixing them all together in the same pot and eating some, as I said, with duck. I salted the beans at the end of the cooking time and added a little bit of duck fat to give them good flavor. I could have added olive oil, butter or bacon fat, but since duck was the meat of the meal... Excellent.
Posted by Ken Broadhurst at 07:00