Heading out at sunrise

If you look closely, or enlarge, the photo below, you can see Walt and Natasha headed out on their morning walk, at sunrise. It was a funny kind of sunrise, because somehow the golden light was shining on the trees out toward the west, but closer to the house the landscape was in shade. 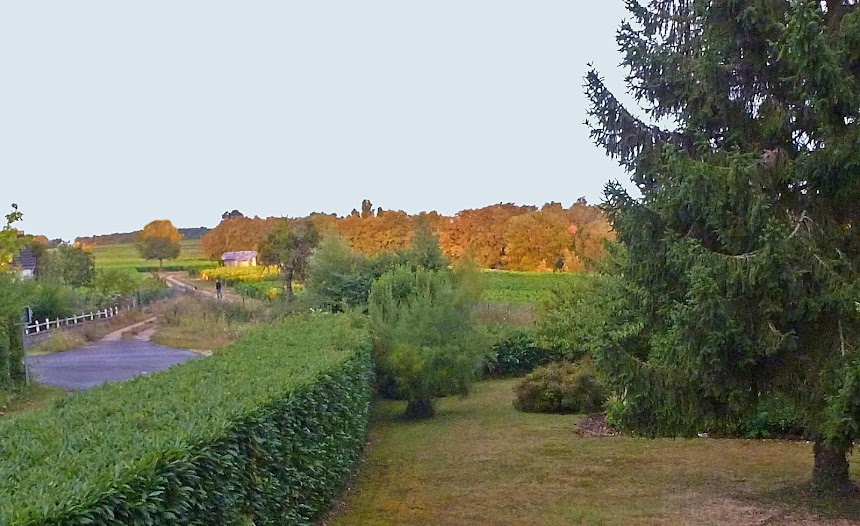 I had a kind of bittersweet experience this week. I ran into an old friend at the supermarket. G is a woman we met 14 years ago, during our first weeks in Saint-Aignan. She now 87 years old. She's had a lot of health problems over the past dozen years. Age has finally caught up with her. We had lost touch with her two or three years ago. She got to be so deaf that it was impossible to talk to her on the phone, and I didn't even know if she was still living in her house or in some kind of maison de retraite. She has lost a lot of her teeth because of gum disease, I learned, and she can no longer drive. That's why she never stops by any more.

However, it was G who saw me first and recognized me in the supermarket. She was with a woman I didn't recognize, but I did recognize G as soon as I looked into her eyes. She looks so different that if she hadn't seen me and spoken I might not have noticed her. The woman with her was her aide à domicile, whose job is to take care of people who need domestic help and health care. We talked for a while, reminiscing — and blocking the aisle in the supermarket. Tant pis for the other shoppers. The woman with G was obviously pleased to see her enjoy meeting up with an old friend and sharing news and memories. She said she takes G grocery shopping on Monday and Thursdays, and sees nearly her every day. I imagine the French social security system pays her for her work.


G is an authentic local character. Her father, a chauffeur, and mother, a governess, were employed by local château owners, so G spent several years living in, for example, the Château de Montpoupon when she was a girl. One of her friends is the woman who owns and lives in the Château de Saint-Aignan.

G used to be an avid gardener, and she kept sheep when we first lived here. We bought lamb from her when she had them slaughtered in the fall. She gave me many plants and seeds over the years. She hosted dinner parties and at least one memorable cookout for 50 or more people at her house back when, and she often invited us. She gave us gardening advice. She was always very interested in the collard greens I grow, and liked them when I cooked them. She asked me about the collards the other day. She wanted to know if I still grow them. It's funny what people remember and are interested in.


I told G about Callie's death, and she was genuinely shocked and saddened, I could tell. She used to have a dog named Reinette ("Queenie"), a golden retriever who had a litter of puppies a dozen years ago. They were adorable, and G gave them all away to friends and neighbors. Then Reinette passed away a few years ago, and the vet gave G got a new dog named Rumba (pronounced room-bah in French). G's face brightened when I asked about the dog, a black labrador, and she said yes, she still is doing fine. I also told G about Natasha and said I would stop by her house soon and introduce them to each other.


Talking to G again was a good experience, but as I drove home from the supermarket a great sadness came over me. Then, back at the house, we saw one of our neighbors (in her 80s now) walk out into the vineyard alone. We'd never seen her do that before, so it was mysterious. She stood and looked off into the distance for a few minutes, and then turned around to walk back to her house. I went out and asked her if everything was okay.


She said her husband had gone out for a walk with their dog, and was overdue back home. Like G, he is 87 years old. She was afraid the dog might have gotten its leash wrapped around her husband's legs and caused him to fall. She said she had asked him not to walk out into the vineyard but to stay on the paved road, close to their house. She's obviously very worried about him. They've been good friends of G's for 40 years. We met her through them, in fact.


I got into the car and drove out into the vineyard to see if I could find the missing neighbor and dog. I parked and walked around where I thought the neighbor said he liked to walk. I didn't find him and had to give up the search. When I got home, Walt said the neighbor had come back over to say she had located her husband. He had been out puttering around in a garage/workshop on their property the whole time. "I've told him so many times that he needs to let me know every half-hour or so where he is and how he's doing," she said, "but he won't listen." Anyway, tout est bien qui finit bien, as we say — at least for the time being.


Did I mention that another neighbor, not quite as old, has to have triple-bypass heart surgery soon? Sigh. Old age is not for sissies.
Posted by Ken Broadhurst at 07:00