Walt said yesterday that he felt like eating some spaghetti with clam sauce, after two days of meals based on lamb, beans, and potatoes. So I'll be going to the market in Saint-Aignan in a few minutes, while he takes Callie for her morning walk. There's a seafood vendor at the market who comes to town every Saturday from the Marennes-Oléron area on the Atlantic coast, between Bordeaux and La Rochelle. It's a four-hour drive. 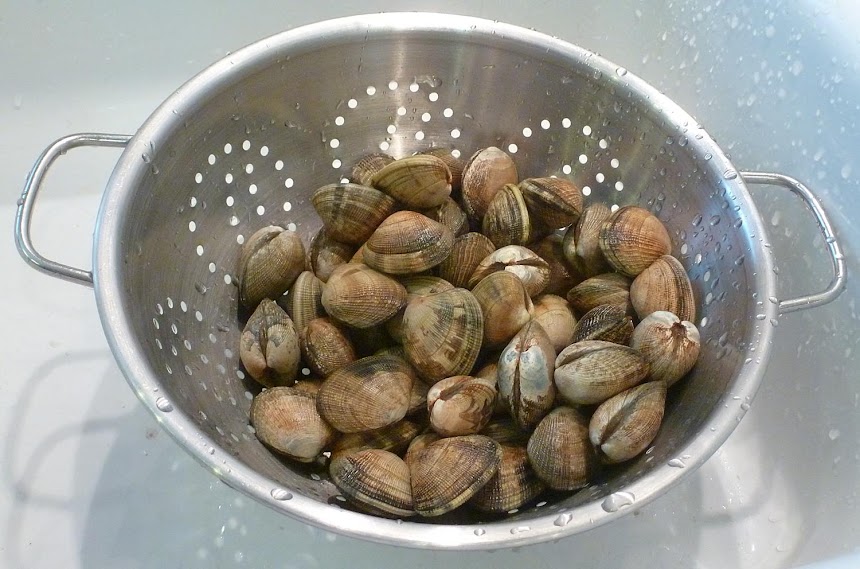 The last time we had spaghetti with clam sauce, we made it with a kilogram of what were called « palourdes japonaises » that I got from the fish section of our local SuperU grocery store. When I bought them, I wondered to myself if they could possibly be imported. The little net bag they were packaged in was well labeled, however, and set me straight.

It turns out that these Pacific Ocean clams are "farmed" in France, along the country's southwest Atlantic coast. Palourdes are in the same family as the North American clam, but they are smaller. There are native French palourdes, and there are palourdes in all the world's oceans, if I understand correctly. The "Japanese" shellfish turned out to be what are known as Manila clams in the U.S. We used to enjoy eating them in California, where they were often cooked the way mussels are cooked in France — à la marinière, with garlic, white wine, and herbs. 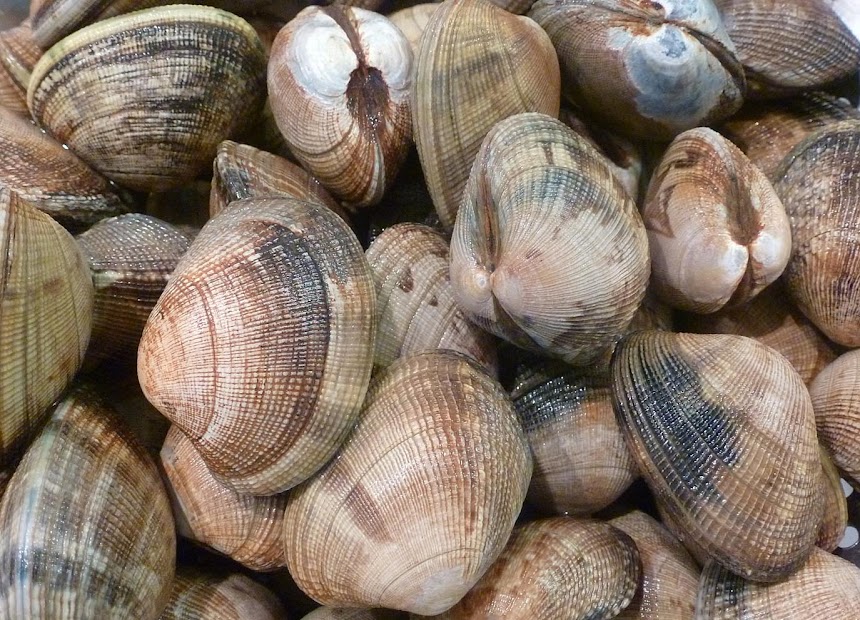 The clams from SuperU were of the species Ruditapes philippinarum. That second term was a good clue that they were the same Manila clams we had on the U.S. west coast. I grew up eating clams, mostly as chowder, on the coast of North Carolina, where we would go clamming on sandbars in the sounds in summertime, using rakes, shovels, or just our hands and feet to dig the clams out of the sand. The French-raised Manila clams are labeled as having been "fished" out of the sand and water the same way — Pêch. à pied, the label says ("fished on foot"), in the Golfe de Gascogne. 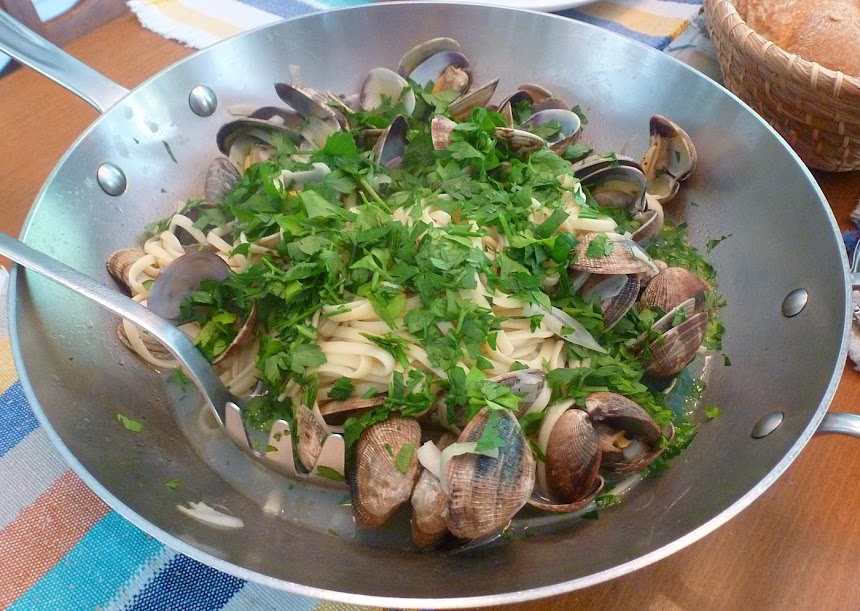 I don't know what kind of clams I'll find at the market in Saint-Aignan. They could be palourdes like the Manila clams, which were introduced into French waters in the 1970s, according to the Larousse Gastronomique. Or they could be another variety known simply as « clams » [klahmss], which are the North American ones. Those were introduced into French waters about a century ago. There's another clam-like mollusk called the « praire » (the venus clam) in France. And finally, there are cockles or « coques », which we like a lot, and also a local Atlantic clam that's called the « lavagnon » on the SW French coast.

Whatever the variety, it's a good idea to give clams time to disgorge themselves of sand before you cook and eat them. What you do is make up a batch of cold salt water (unless you can get actual seawater), add in a tablespoon or two of corn meal (polenta) or semolina (cream of wheat), and let the clams soak in the water for a few hours. They will feed on the corn meal and expel any sand that remains in their digestive tract. Then they won't be gritty when you eat them.
Posted by Ken Broadhurst at 07:40