I found bags of French corn meal. (It doesn't take much to get me excited.)

A few years ago when I published a blog topic about cornpone (!), a recipe for which I got from my Illinois friend Harriett, my Parisian-American friend CHM wrote a comment and told me about a French version of corn meal called « gaudes », pronounced [GOAD] as one syllable. 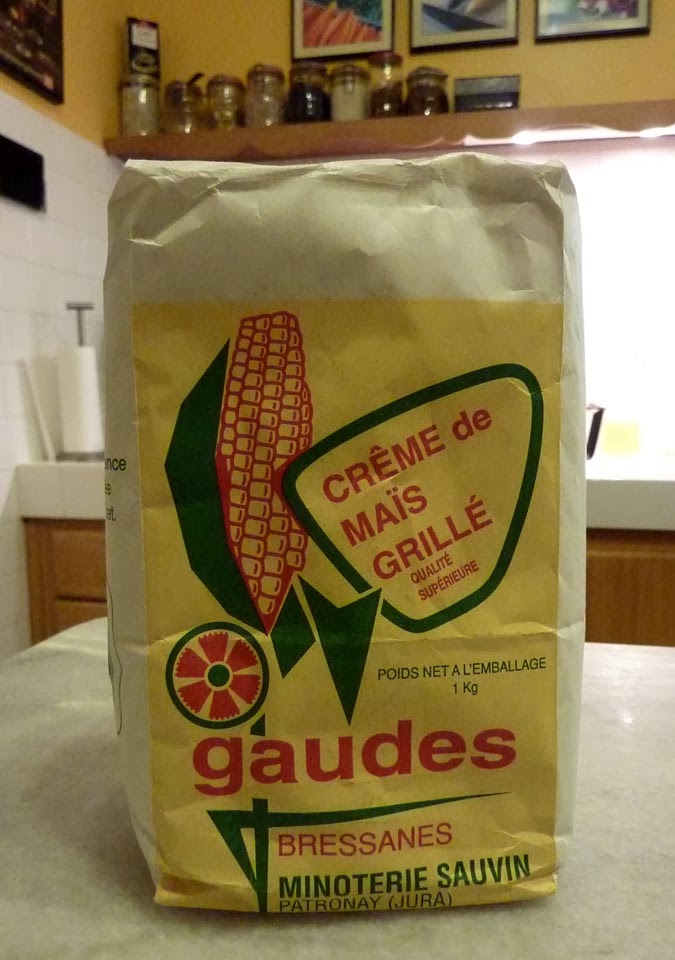 Normally, corn meal in French is « semoule de maïs » (corn semolina) or just « farine de maïs » (corn flour) — « maïs » [mah-EESS] being what we Americans call "corn" and others might call call "maize". Coming from the U.S. South, I'm more than familiar with — I grew up on and continue to cook and enjoy — things like grits, cornbread, cornpone, and hushpuppies.


In Italy they call corn meal polenta and in eastern France, in the area known as Franche-Comté, people call it gaudes. It's made into a bouillie — in other words, the corn meal is boiled in water — and served with butter and milk. In English, some people call that "gruel" — not very appetizing — or "porridge". I call it "grits". The word gaudes apparently derives from a German term.


In his book The Apprentice: My Life in the Kitchen, the Franco-American chef and TV host Jacques Pépin, who comes from eastern France, describes a meal served by a woman on a farm when he was a child. He and his family were getting ready to relocate themselves from their home in town and go live on the woman's farm for the summer:

...the farmer's wife heaped dinner on the table — literally. She slopped spoonfuls of a yellowish brown porridge, called gaudes, not onto plates or bowls, as we ate it at home, but directly into hollows carved into the wooden tabletop. We gathered around as the farmer's wife poured cool, raw milk over our gaudes. With no further ceremony, we all sat down and dug in. The gaudes were thick and smooth and had the salty, slightly nutty taste of the roasted corn flour from which they had been made. 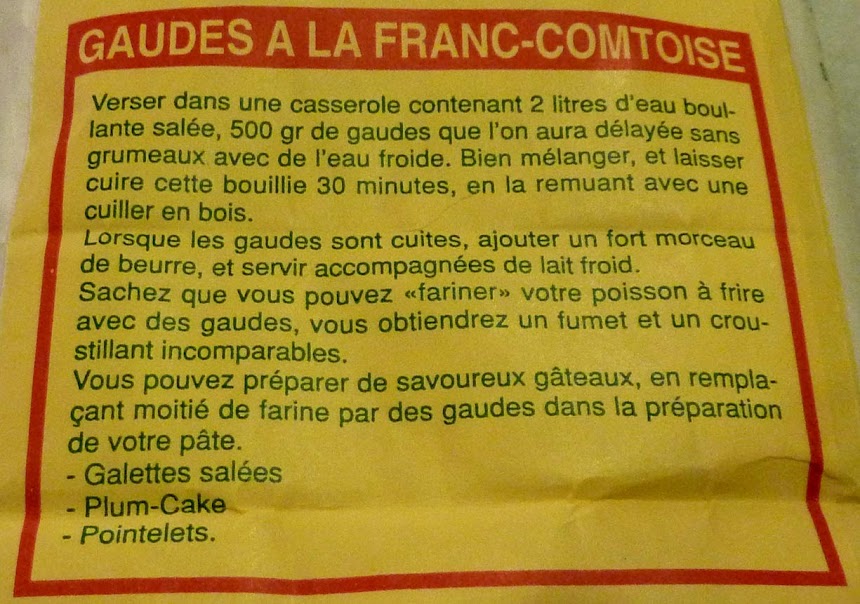 The directions on the package explain how to make the gaudes into "porridge" or grits. It also says that you can "flour" fish with gaudes before frying it for better flavor and crispness, and that you can use gaudes to replace part of the flour in cake batters for good flavor. I already do all that.

I was out shopping yesterday when I found the bag of gaudes. I bought two bags (2 kilos). I keep corn meal in the freezer, and I try always to have a supply. I can buy it at certain shops and supermarkets in the Loire Valley, but not everywhere.

Corn meal was on my list yesterday because I was running low. I'm glad it was. This time, I was over in the town of Selles-sur-Cher, ten miles upriver from Saint-Aignan, where there's a Belgium-based chain supermarket called Colruyt that has a strong presence in the Franche-Comté region. I haven't opened a bag of gaudes yet, but maybe today....