Fort Macon is a local landmark and North Carolina State Park that is visited by more people than a million people annually (according to what I've read). The current brick and stone fort was built in the early 1800s, replacing an earlier wooden fortification, to protect the port of Beaufort from the marauding British (remember the War of 1812?) Anyway, the fort is at the eastern end of Bogue Banks, overlooking Beaufort Inlet, the shipping channel, and the harbor and port terminal at Morehead City.

One of the most recognizable landmarks in Carteret County, N.C., is Cape Lookout lighthouse. It's a brick structure that is 163 feet (50 meters) tall, located on a spit of sand that juts out into the Atlantic Ocean where the Gulf Stream flows. My photo above was taken some 10 miles from the cape and the lighthouse. Remember you can click or tap on the images to enlarge them on your screen. 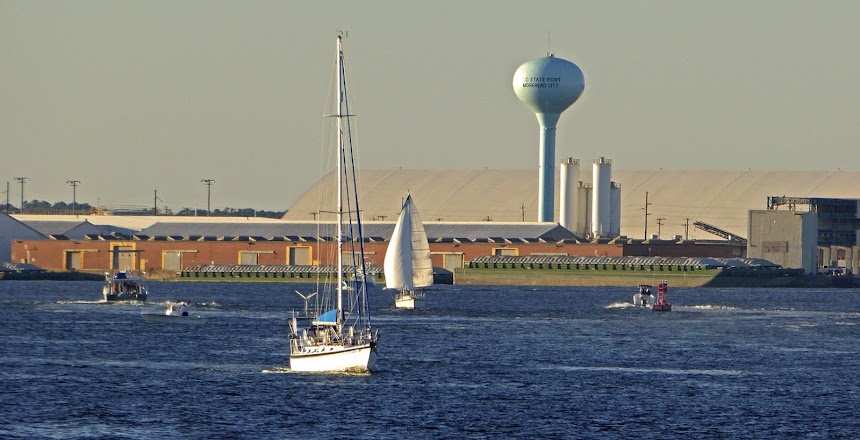 The town and port of Morehead City were developed in the 1850s by a former governor of the state, John Motley Morehead, and a group of investors. They built a rail line from the state capital, Raleigh, down to the coast, 140 miles distant, to take freight to the deep-water port and bring other freight back. The neighboring town of Beaufort [BOH-furt] had been in existence since the early 1700s. 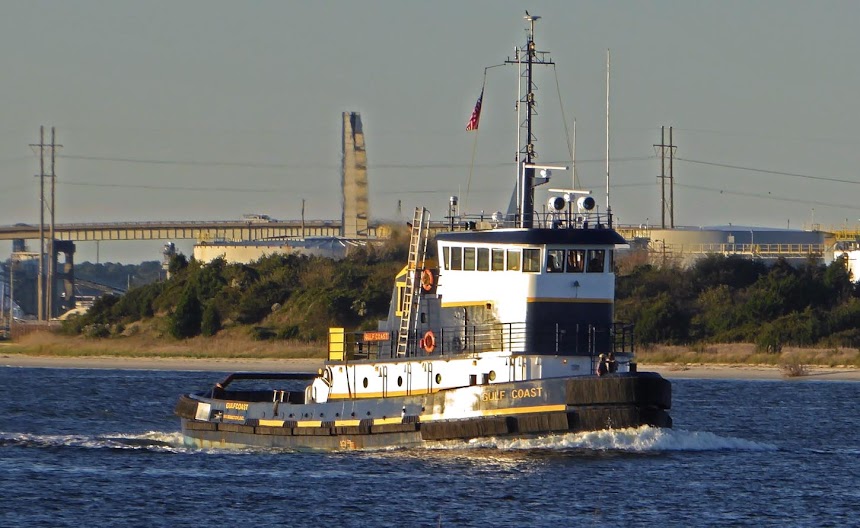 The port at Morehead has just nine berths for ocean-going ships, but it is deep — 45 feet (nearly 14 meters). Tugboats are a common sight, and fog horns lull you into sleep on foggy nights (or wake you up on foggy mornings). Our house, which my mother sold in 2005, was about a mile from the port and less than 2 miles from the ocean. On stormy night, we could hear the surf pounding the beach.

As we stood on the shore and looked out toward the port and across the inlet toward Shackleford Banks, I noticed a big old jet airliner flying overhead. It looks like a passenger jet, anyway, with the stripes painted on its tail fin. I recognize them but can't think what airline uses that design.

P.S. After doing some searching, I've determined that the plane in the photo above is an Air France jet. I should have recognized it. Now what an Air France jet is doing flying over Morehead City, I'll never know.
Posted by Ken Broadhurst at 07:00