Nothing could be finer than to be in Carolina

So as I've said, these days and for a few more days, I'm in North Carolina. That's an American state on the East (Atlantic) Coast about halfway between, say, Boston (New England) and Miami (Florida). North Carolina has a coastline that is 300 miles (500 km) long. For all that length, the "inner coast" — the edge of the mainland — is protected from ocean waves by a series of long, narrow "barrier islands" with "sounds"  (lagoons, Fr. étangs) lying behind them.

My family comes from and lives in Carteret County, which is named after the Anglo-Norman Carteret family. There's a little town (village) in Normandy named Carteret (kar-tuh-RAY or kar-TRAY) that is just across the water from the Isle of Jersey, where the Carteret family was from. Carteret County, N.C., is located at a point on the coast where two of the barrier islands, and therefore the beaches, run east to west, facing south. The warm Gulf Stream ocean current flows northward just 20 to 30 miles offshore. 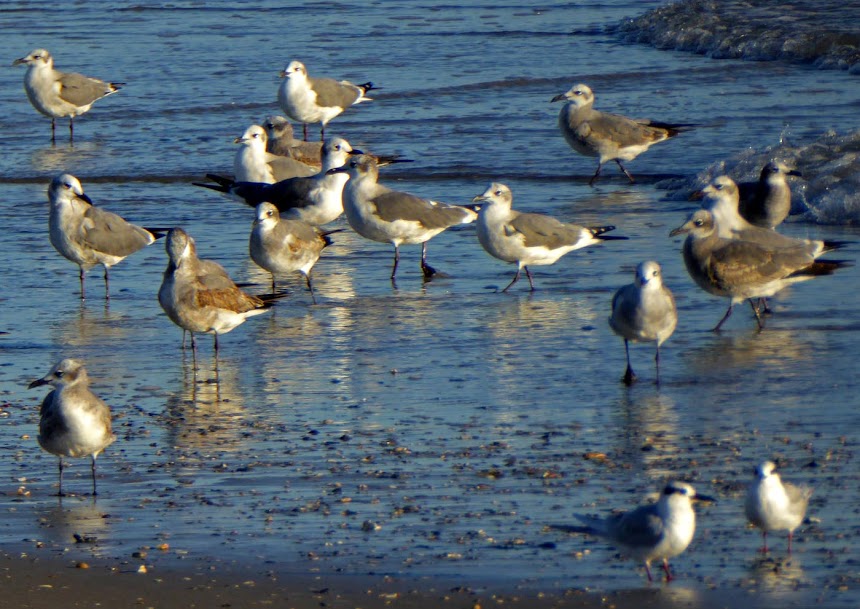 Morehead City, my home town, is both a fishing port and a shipping port that can receive ocean-going vessels. It is one of the deepest ports on the U.S. East Coast, but it is also very small. The population of the town is about 8,000, and the population of the whole county (500 square miles, or 1300 square kilometers) is just 60,000. Until relatively recently — say 75 to 100 years ago — Carteret Country was an isolated area that was far off the beaten path. 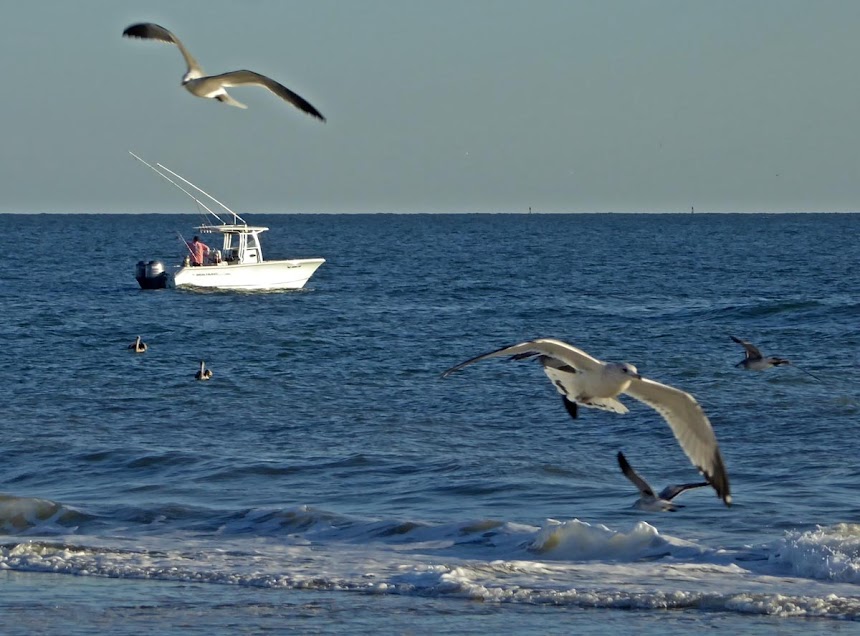 Actually, there is a lot more water than land in Carteret County. Much of what passes for dry land is actually salt marsh or swamp or sand dunes. Two of the longest barrier islands, which belong to the chain of coastal islands known as the Outer Banks, are Core Banks and Shackleford Banks. Together they run for more than 50 miles (80 km) along the coast and are completely undeveloped. They're inhabited mainly by sea birds, ghost crabs, horse flies, mosquitoes, and wild horses. 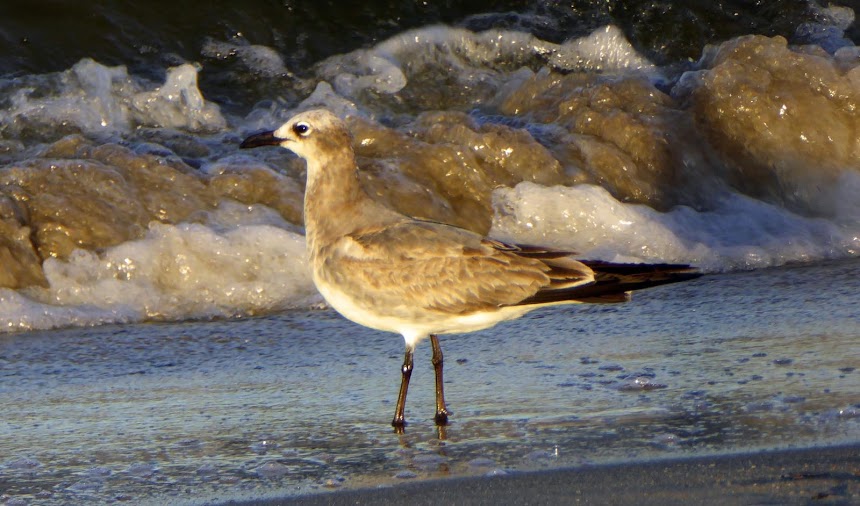 The coast of North Carolina resembles the area of France around the Ile d'Oléron, on the French Atlantic coast, and the area running south from the city of La Rochelle down to the Spanish border. Extensive pine forests cover the land. Salt marshes, protected from ocean waters by barrier islands, line much of the N.C. "inner coast." 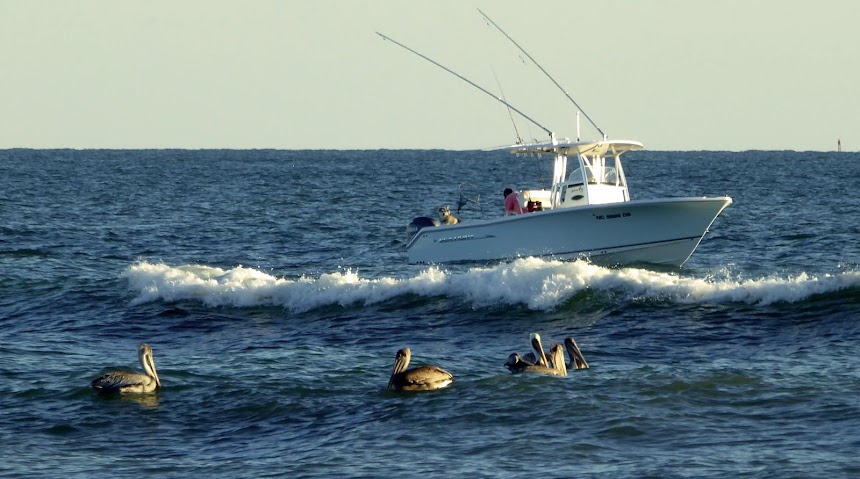 The sky is overwhelmingly big, and the light is brilliant, intensified by being reflected off hundreds of square miles of sound and ocean waters. The climate is very mild — but hot and humid in summer and rainy in winter. Average annual rainfall is about 60 inches, which is nearly three times the amount of rain we get annually in the Loire Valley. 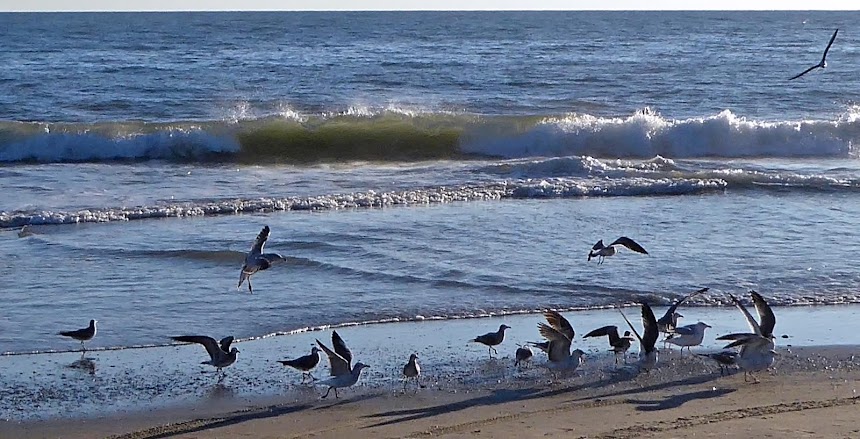 I finally got out to the beach today. My sister and I drove there from my mother's place. It's a drive of about, say, three miles, but today was the first time I've been across the bridge that links the mainland to the local barrier island, highly developed Bogue Banks, which includes 25 miles of sandy beach and gentle surf. It was late afternoon, and the setting sun was brilliant, making for very high-contrast images. My theme for today is sea birds.
Posted by Ken Broadhurst at 07:00