We once were lost...

...but now we are found. That was the story of the trip back to North Carolina from Virginia Beach yesterday.


When I say Virginia Beach, what images pop into your mind? In mine, it was a small resort town by the sea, with narrow streets, maybe some sand dunes, a few restaurants, and a lot of picturesque houses. The reality was fairly different from that. Do you know how many people live in Virginia Beach? No? Well, I'll tell you. I just learned all about it. The population of Virginia Beach is 500,000. That's right — half a million people. It's the most populous city in a metropolitan area with a population of 1.7 million. 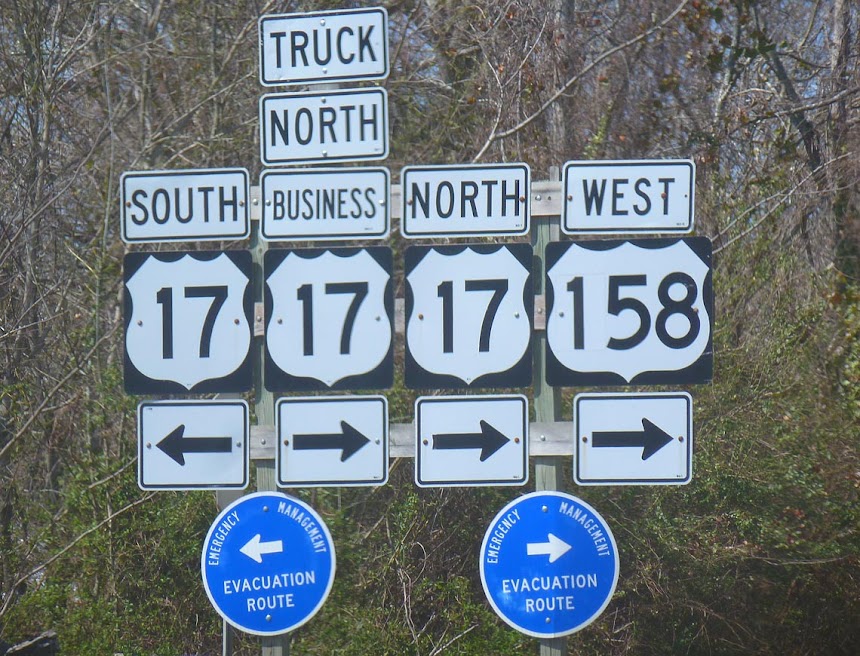 
Instead of narrow lanes and pretty houses, the whole place — all 500 square miles (1,295 sq. kms) of it — seemed to be wide boulevards with three or four lanes of heavy traffic moving at a brisk clip in each direction. There were vast intersections with many turning lanes and a tangle of traffic signals. I saw no pedestrians. Some of the roads were elevated. Those at ground level were lined with shopping center after shopping center, and huge complexes of multi-story apartment a.k.a. condominium buildings. Neighborhoods of single-family homes, including not a few "gated communities," were tucked in here and there.

The bridge across Albemarle Sound in northeastern North Carolina 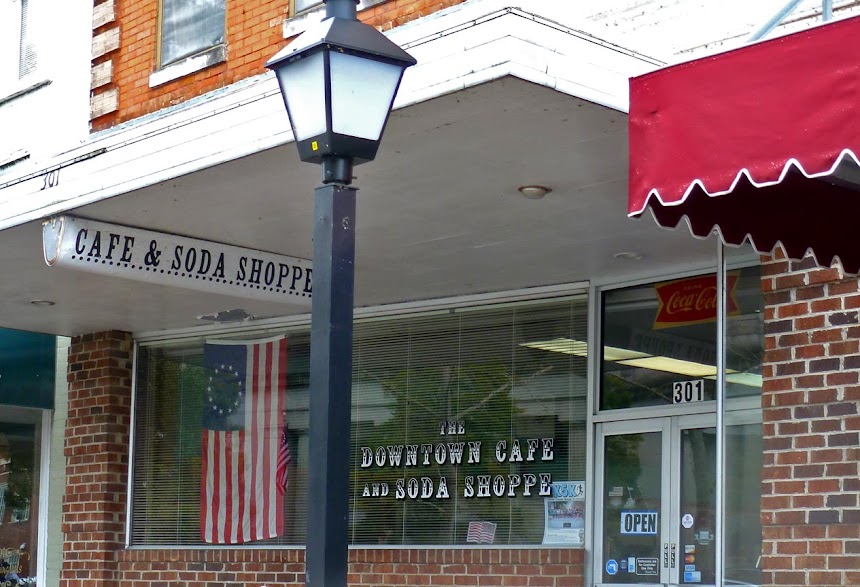 We had lunch on Friday in this soda shop in downtown Edenton, N.C.

Oh well. Live and learn. We had a good time visiting our friend there. And then we left this morning to drive back to N.C. and we I promptly got lost. I stopped in at least four 7/11-type shops along the road and tried to buy a map of Virginia. No dice. So I just kept driving south. I crossed the border into N.C. and I kept on heading south. Suddenly I was driving through a quite extensive salt marsh. Then I found myself on an island: Knotts Island, N.C., snug up against the Virginia state line. 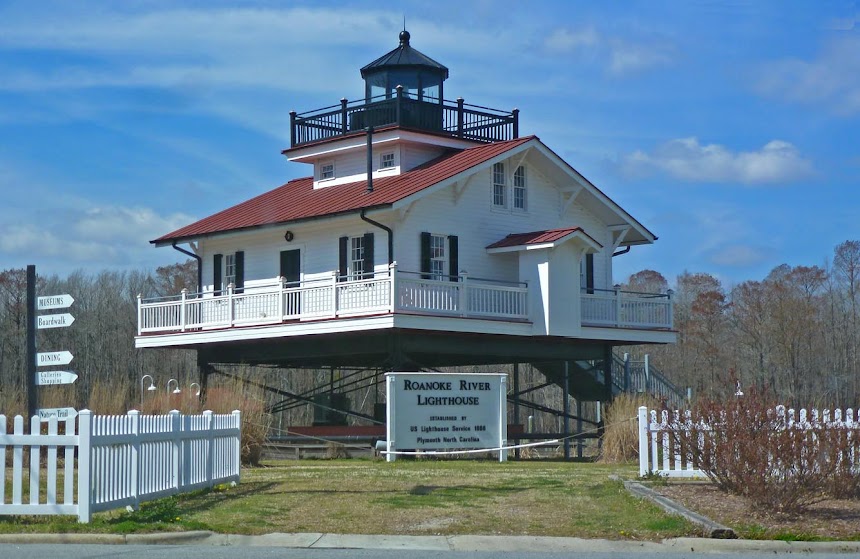 A lighthouse on the Roanoke River in Plymouth, North Carolina

Suddenly the road ended at a ferry landing. It was exactly noon by my watch. And the ferry was just pulling away from the dock. If we had arrived five minutes earlier, we and the car would have been on it, and in a few minutes we would have been on the N.C. mainland and on roads that are clearly marked on our North Carolina road map. Instead, we had to turn around and drive 20 miles back to Virginia. The next ferry was in two hours, and we didn't want to wait.

Back in the town of Creeds, Va., I stopped in another shop (a convenience store/sandwich bar) and tried again to buy a map of Virginia. There were none to be had. I guess everybody but me has a GPS device in his car. I asked the store clerk if she could give me directions from Creeds to the road that leads to Elizabeth City, N.C. She looked confused and then asked the customer in line behind me if he could help. He was a plump young man in coveralls who looked as if he had just finished his shift sweeping chimneys. His face and hands were covered in smut. Or maybe it was grease. 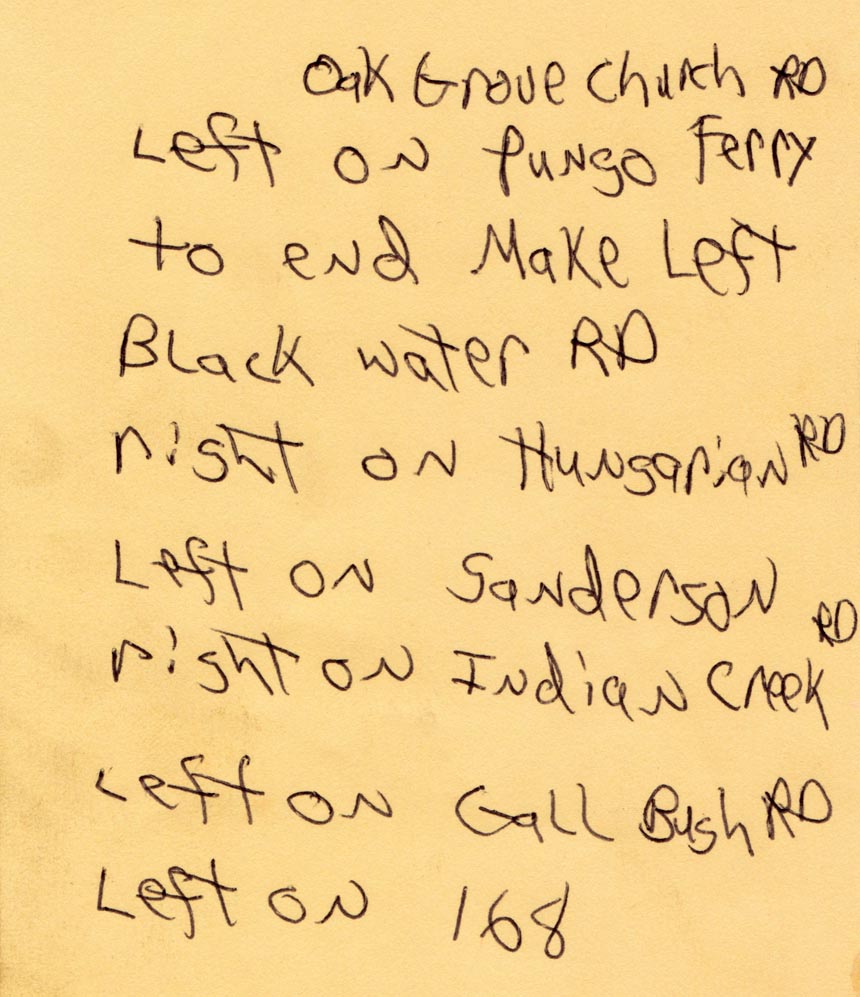 He was very helpful, however, and he asked me if I wanted him to write down the directions, which were fairly complicated. I thanked him and said yes. On the left is the piece of paper he handed me. He talked me through it as he wrote it down. And he really knew the area, because the directions were perfect. Within 20 minutes we were on the right highway headed south. His help saved us an hour or so of driving back into that city to the north of half a million people, and I think as many cars, where we would have been able to find the route back toward home.

The northeastern corner of North Carolina is rural and almost lost in time. Salt marshes and ferries, broad flat fields, and flocks of migrating birds are the scenery. The southeastern corner of neighboring Virginia is a megalopolis. It's mind-boggling.
Posted by Ken Broadhurst at 07:00