Last week, when Chris and Tony were here, I made soupe à l'oignon gratinée. There's nothing better for lunch on a chilly, damp day. There are two requirements for a tasty onion soup: a lot of good onions and some rich broth, whether it's vegetable, beef, or chicken broth. 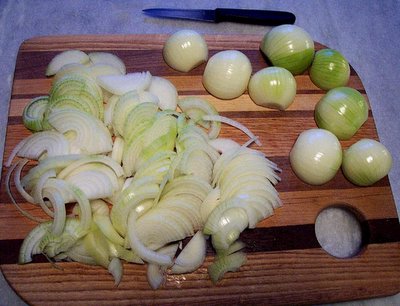 The soup part is pretty easy. You thinly slice a pound and a half of onions (that's 750 grams). You sauté them quickly in some butter and oil, and then you turn down the heat, add a good pinch of salt and a teaspoon of sugar, and let them stew in their own juices for 45 minutes or even an hour at a very low temperature, until the onions are caramelized, golden, and soft. At that point you stir a tablespoon of flour into the onions and let that cook for a couple of minutes. 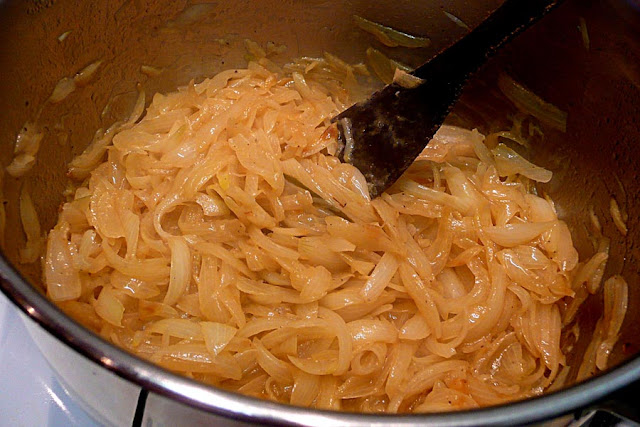 Then you pour in a couple of liters (quarts) of broth, and you let the soup cook for 30 minutes. Put in a bay leaf, some black pepper, and a pinch of dried thyme to flavor it well, and add a good glug (say half a cup) of dry white wine. Once it reaches the boiling point, turn down the heat and let it just simmer. When it's cooked, taste it and see if it needs more salt. 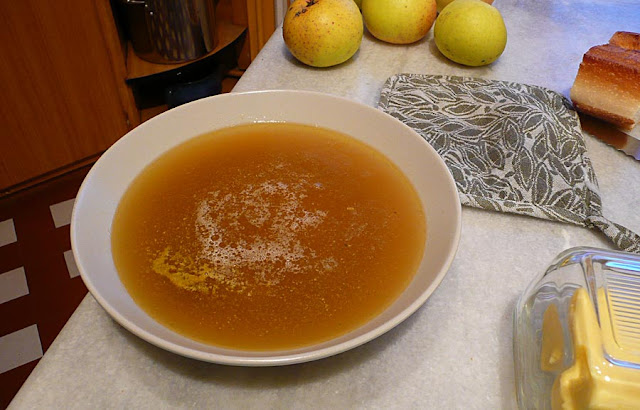 Voilà. Soupe à l'oignon. You can strain out the onions and eat it that way if you want. Or eat it with the onions floating in the soup.

What makes it really good, though, is the gratinée part. To do that, pour the soup into individual oven-proof bowls or into one big oven-proof dish. Take thick slices of dry (toasted or even stale) French bread and float them on the surface of the soup. Put a good layer of grated Swiss cheese (a.k.a. gruyère or comté or emmenthal) — or other cheese if you like — on top of the bread slices, which should pretty much cover the surface of the soup. Put the bowls of soup into a hot oven for 15 minutes or more, until the soup is bubbling and the cheese is melted and starting to turn golden brown. Don't burn it! 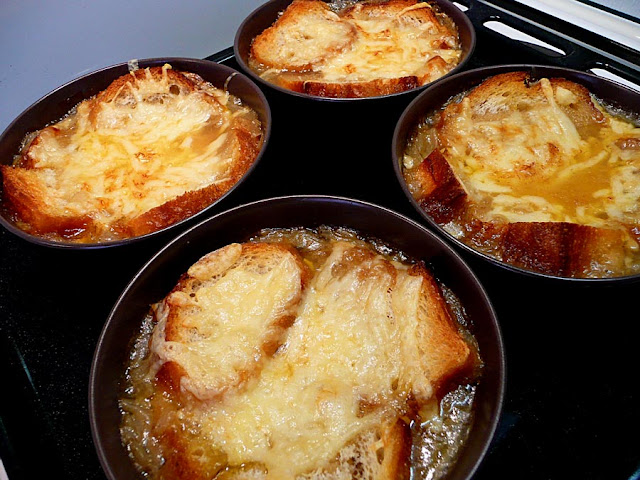 Take it out of the oven and let it cool for a few minutes before you try to eat it. You'll burn the roof of your mouth if you aren't careful. C'est délicieux. Especially on a chilly, gray autumn day.
Posted by Ken Broadhurst at 08:53