The next time I make quenelles, I think I'll make half a recipe. That is, cut the panade recipe in half and cut the amount of turkey or chicken in half. Halve all the ingredients (see yesterday's post.) My recipe ended up making at least three dozen (maybe more) dumplings, and that's too much unless you are feeding a big crowd. 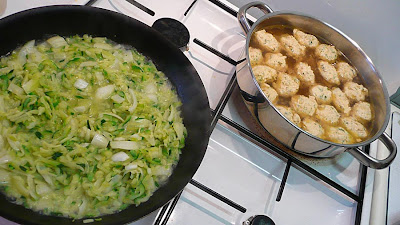 Cooking zucchini with onions and
turkey quenelles for a gratin
Yesterday I poached some more quenelles and served them au gratin — with melted cheese — on a bed of grated zucchini/courgettes and sliced onion, which were cooked in a frying pan on top of the stove before being put in the gratin dish. I also put in about half a cup of cream with the vegetables. 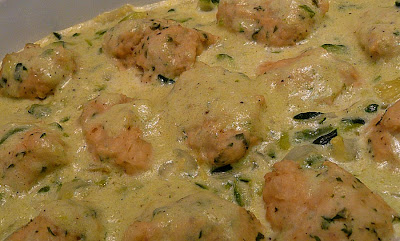 The quenelles on a bed of creamy zucchini
Then you can place the dumplings on top and sprinkle on some grated cheddar or Swiss cheese. Put the dish in a hot oven and let cook until the cream is bubbling and the cheese is melted and golden brown. Delicious. 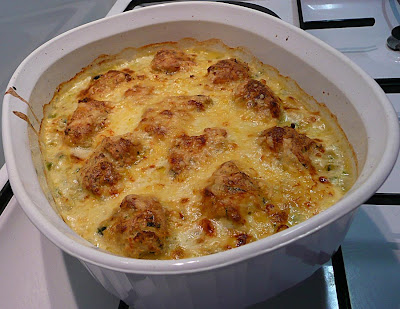 Sprinkle grated cheese over the top and brown it in the oven.
Cutting the ingredients in half also means everthing will fit in the bowl of a normal food processor, so there'd be no need to use a Kitchenaid stand mixer. Everything would be easier, especially if you start with ground meat you've bought at the supermarket.
Posted by Ken Broadhurst at 10:03