A week ago I went with my friends from California for a tour and tasting at the Domaine de la Renaudie winery in Mareuil-sur-
Cher. It was Patricia Denis, who owns and operates the winery with her husband Bruno, who showed us the facility and poured the wines. 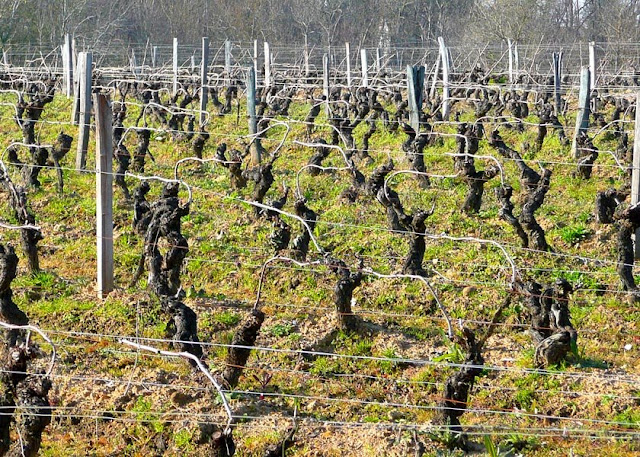 The area around Saint-Aignan is in the Touraine AOC (Appellation d'Origine Contrôlée) viticultural area. The main grapes grown here are Gamay, Cabernet Franc, and Côt (aka Malbec) for red wines, and Sauvignon Blanc and Chenin Blanc for whites.

Patricia told us that La Renaudie grows all those grapes, plus Chardonnay, Pinot Noir, and Grolleau (aka Groslot). They use the Chardonnay, blended with Chenin, to make white sparking wines, and blended with Pinot Noir for sparkling rosés. I neglected to ask about the Grolleau grapes. Here's a web page in French: Grolleau seems to be used in still and sparkling rosés all through the Loire Valley. 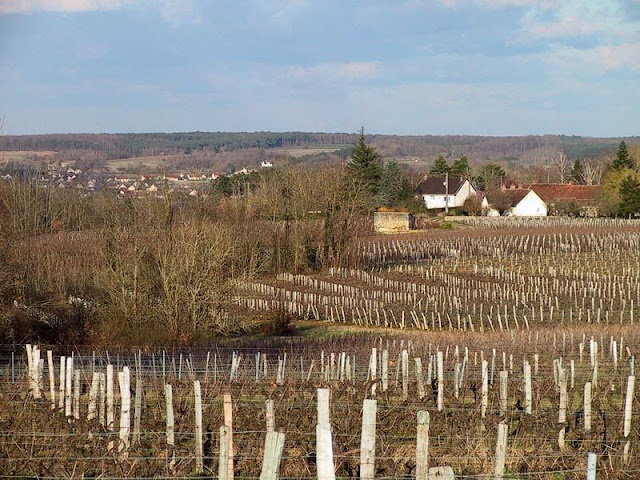 Another grape that Patricia and Bruno grow is Pineau d'Aunis, which is used in still rosé wines. Walt and I think their Pineau d'Aunis rosé is about the best rosé we have found around here. One of the unusual wines we tasted last Saturday was a rosé made from Côt grapes. Cabernet Franc and Gamay rosés are more common.

Patricia and Bruno are third-generation grape-growers and wine-makers. It was Bruno's grandfather Albert who in 1923 started buying land planted in grapes around the village and planting new vineyards, Patricia said. And it was Bruno's father Jacques who built their underground storage facility. At 80, Jacques Denis still works out in the vineyard some days. 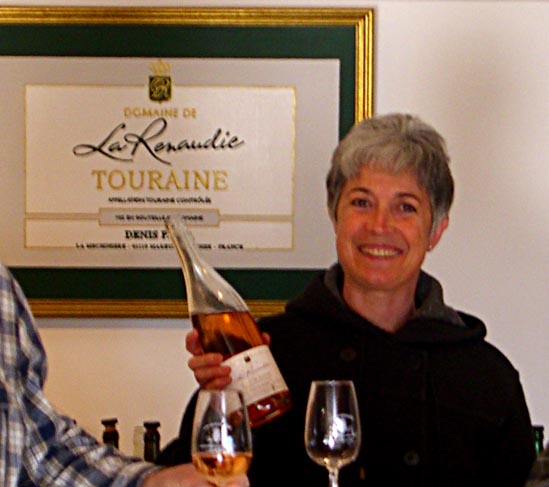 Patricia said her father-in-law dug the cellar himself back in 1978, when he was about 50 years old. It's big and is built out of concrete blocks. When it was finished, Jacques covered the roof over with soil to make it temperature-stable (18ºC/64ºF). The cellar was subsequently enlarged and a big warehouse-type building, now fitted with stainless steel vats for the wines, was built on top of it. The winery (called the chai in French) is air-conditioned as necessary during the summer to keep the temperature below 70ºF.

The Denis family owns 26 hectares — 64 acres — of vines scattered around the village. A lot of them are at La Renaudière, where I live, and are the vineyards where I walk the dog every day. The Denis family owns numerous parcels of land out there, and other grape-growers — including Bruno Ledys, who sells his grapes and doesn't make wine, and Jean-Noël Guerrier, who makes wine and sells some of it retail but even more of it wholesale to distributors — own other parcels. 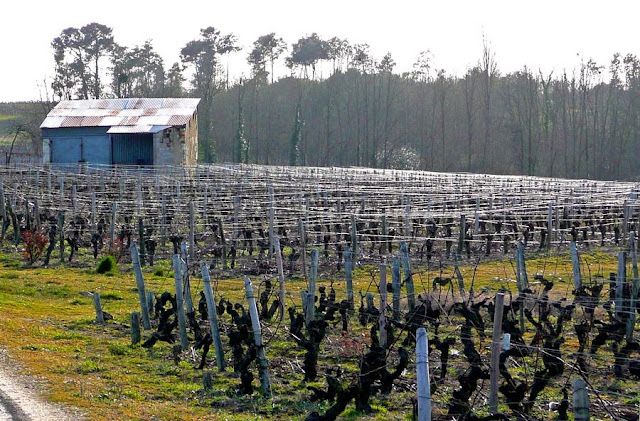 Grape vines are supported by wires strung on wooden posts.

We asked Patricia how many parcels of vines she and Bruno own, and she had to ask Bruno, who was busy piping wine out of one big stainless steel vat into another and getting ready to bottle it. He said they owned about 60 parcels.

I started to tell our friends from California about the way the land around the village is all chopped up into little parcels and said I wondered if land was owned that way all over France. Patricia said no, it was particular to Mareuil-sur-Cher.

The village was home to several large families who owned land from the banks of the Cher River all the way up into the vineyards, which are mostly located on the hills that mark the edge of the river valley. Over the generations and the centuries, the land was gradually divided into smaller and smaller parcels as the families left shares of their estate to their children. That process continues.

Patricia said she grew up in Oisly, a wine village about 10 miles north of Saint-Aignan, where the land was never subdivided the way it has been here in Mareuil. The land around Oisly is flat and sandy, which means vines can be planted in very long rows all running in the same direction.

She told us stories about the harvests in different years. In 1976, for example, northern France experienced a long, hot, very dry summer. She said she and Bruno, along with some students who came to help, wore bathing suits out in the vineyard as they harvested the grapes. At the winery she has a photo of her husband, his father, and this grandfather taken a few weeks later, when the autumn rains began again and the heat wave broke. Bruno has hardly changed since those days. 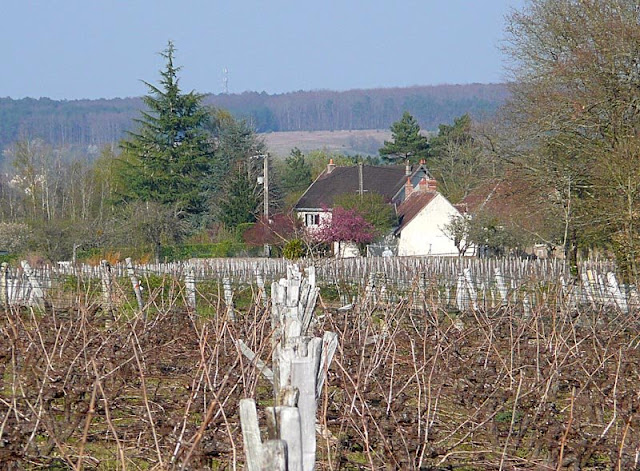 The hamlet at La Renaudière, on the edge of the vineyard

In 2003, the year of the great canicule — the heat wave we experienced the first year we lived at La Renaudière — the harvest was a month earlier than usual — August 25 instead of the normal September 20. Patricia and Bruno weren't sure the grapes were ripe, but the fact was that they were turning into raisins on the vine from the intense heat. The wines that year were very different from any others they had ever made.

In 2007, April was hot and bone dry. The vines got off to an early start, and local growers thought the harvest would be precocious. But May, June, July, and most of August turned chilly and rainy. For a while, they figured they wouldn't be able to make any decent wine at all, because the grapes were too full of water. And then at the end of August the weather turned hot and dry, and it stayed that way until the end of September. The grapes ripened nicely, and the wines turned out pretty good. (They will be released this month.) 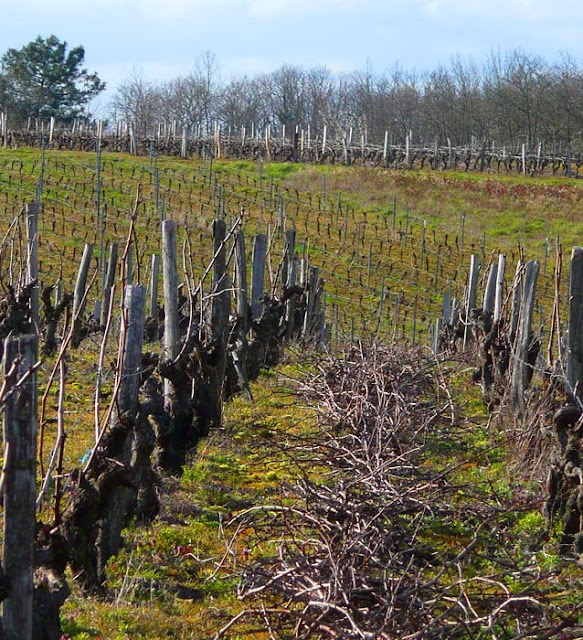 The vineyards at La Renaudière

Patricia also said that the rocky hills around Mareuil are de vrais coteaux — actual hillsides — as you would find in Burgundy, Champagne, or Beaujolais, for example. The grapes grown on the coteaux give wines that are fruitier and more complex than do grapes grown on flat, sandy soil.

I asked her why Touraine wines include a mention of the grape variety on the label, whereas wines from Burgundy, Beaujolais, Vouvray, Chinon, and Bourgueil do not. It's simple, she said. Touraine wines are not so well known, so we tell buyers that it's Gamay, Cabernet, Sauvignon, or something else. When you buy Burgundy, you know you are buying Pinot Noir. It's the red wine grape grown in Burgundy. Beaujolais wine is made with the juice of Gamay grapes, and Vouvray wine is made with Chenin Blanc grapes. Chinon and Bourgueil wines are made exclusively with Cabernet Franc grapes. 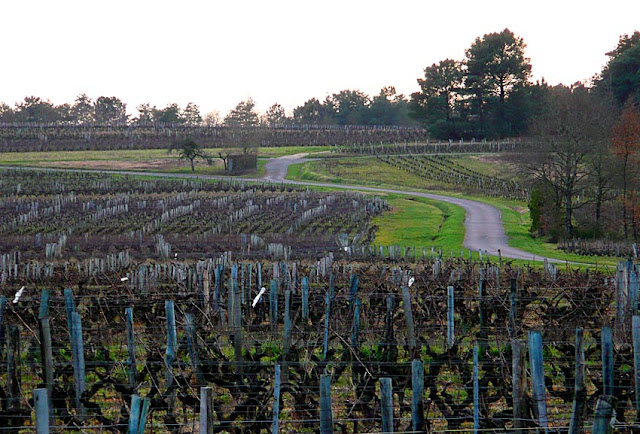 The wine road at Mareuil-sur-Cher

When they first took over the business from Bruno's father, Patricia said, they used to make the wine and bottle it all before they even started to think about how they would sell it. That wasn't efficient, because they would end up with excess inventory. Touraine wines are made to be consumed young, not cellared, so cellaring them for a long time was not an option.

A lot of the wines made at Domaine de la Renaudie are pure varietals (100% Gamay, Cabernet, Côt, or Sauvignon) but some are assemblages, or blends. The vin de tradition in this area is a blend of Gamay, Cabernet Franc, and Côt. 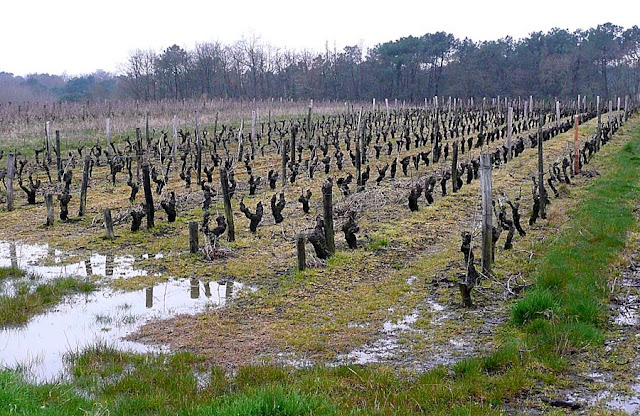 Nowadays, they bottle the wine as they go, several times a year, after they receive orders. That way, they don't have to spend money on bottles and corks before they know they will make it back in sales. I didn't ask, but I imagine they sell the leftover stock in bulk to négociants — major wine dealers and distributors — who bottle and label it with their own brand. Patricia did say that the wine can be kept in the stainless steel vats for two years without going bad. Touraine wines are seldom barrel-aged.

Patricia gave an excellent tour (she speaks fluent English) and we tasted two or three wines that were very good. We also bought six or seven bottles to enjoy during our friends' visit.
Posted by Ken Broadhurst at 09:12