Mexican cooking on a gray day 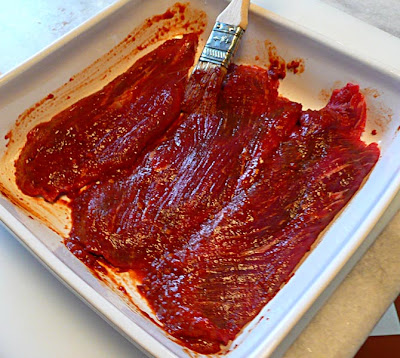 Beef marinating in just a thin coating of pureed chipotle peppers
The weather has been gray and drizzly, which is normal for this time of year. To put some spice into our otherwise dreary existence, we thought some Mexican food might be in order. Armed with a couple of Rick Bayless cookbooks and the provisions I bought at the « El Mercadito » grocery in my North Carolina home town last month, we are making tacos this morning. 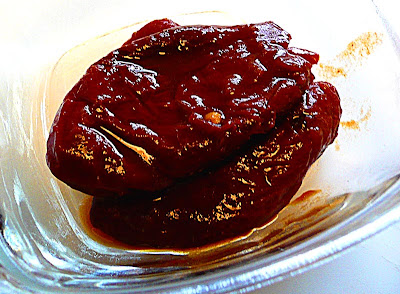 Chipotle peppers — smoked and surprisingly hot
(je veux dire très piquants)
One of the most important ingredients is a can of chipotle peppers in adobo sauce. Others are fresh tomatoes (available at the supermarché, for what they are worth), garlic, onions, beef, and of course corn tortillas. Walt is making those, using masa harina that I also brought back from the N.C. 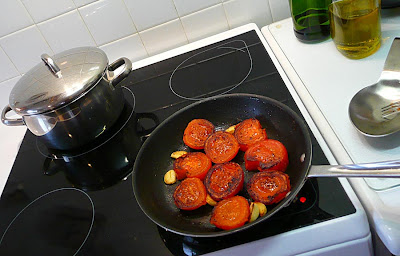 Pan-roasting tomatoes and garlic to make
a salsa using hot, smoky chipotle peppers
I made a salsa and a pot of black beans that I seasoned with onions, garlic, duck fat (!), chopped cayenne peppers, tomato purée, and a couple of tablespoons of smoked paprika. The Bayless recipe called for bacon, and French lardons fumés would have been perfect, but I didn't have any in the fridge. So I used the duck fat instead. I have quarts of that, literally. 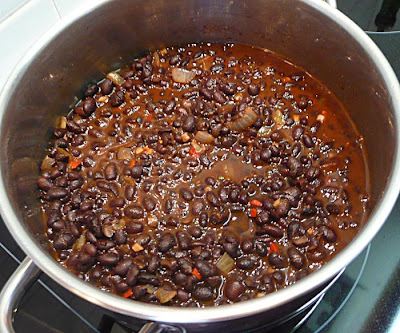 Black beans cooked slowly in water with no seasoning or salt,
then spiced up when they are tender and ready to eat
The beef I got at SuperU is a cut called macreuse (€7,50/kg on special). It looks like flank steak. I plan to sear it quickly in a hot skillet, let it rest for a few minutes under foil so the heat spreads through the meat but it remains rare. That's called carne asada, I think. Then I'll cut it across the grain into strips to put on the tacos along with some pan-roasted onion slices. Well, that's what Rick Bayless says to do, and who am I to argue. Maybe I'll have some more pictures later.
Posted by Ken Broadhurst at 11:23