At the airport in Paris last Saturday, I met a woman who was traveling with a teenage girl. We were all waiting for hotel shuttles, and when those two Americans and I got on the same one I spoke to them. They were from Oregon, and the trip to Paris was the woman's present to her granddaughter for her 16th birthday.

The grandmother, who was about my age, said she had taken a trip to Paris 35 years ago when she was much younger and had loved it. She had probably built her wonderful, youthful Paris experience up in her mind, and I could tell she was disappointed with her three-day Paris visit this time. The city was busy and noisy, in her view, and crowded. "I think Paris has become the Los Angeles of Europe," she told me. It's hard for me to understand that comparison, since Paris is such a perfectly walkable city, but that's what she said. 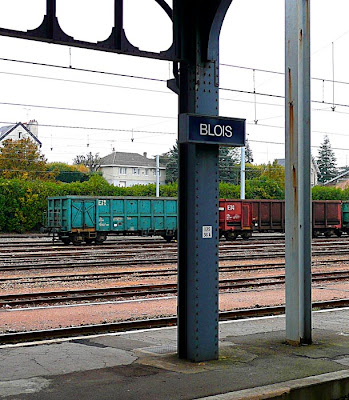 Seen at the train station in Blois
At some point -- we were on the shuttle for 45 minutes -- the woman pulled out a thick pad of carefully folded-up pink toilet paper to use some as a tissue. She had obviously taken it from their hotel bathroom. She asked her granddaughter if she needed any. The granddaughter declined the offer, looking slightly embarrassed.

"Isn't this pink toilet paper pretty?" the older woman said to the younger woman. "I remember the first time I came to Paris, they had toilet paper of different colors in all the different bathrooms. It was so beautiful!"