Of bread and water

The French Wikipedia's article on bread includes a chart that shows the drop in the amount of bread consumed by the French every day. According to 1999 INSEE figures, in 1900 the average amount of bread consumed daily was 900 grams, or about 32 oz. (2 lbs). By 1925, that figure had already dropped to 325 grams (11.5 oz). It has dropped steadily since then and has been down as low as 150 grams (5.3 oz) a day in recent years. 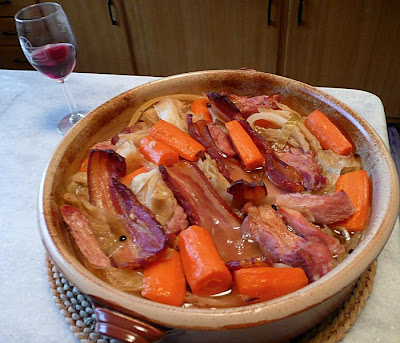 Here's something that's good with bread and wine: cabbage
steamed and then braised in the oven with carrots, smoked
thick-sliced bacon (poitrine fumée), chunks of salt-cured pork
(palette de porc demi-sel), juniper berries, and bay leaves
To tell you the truth, Walt and I have a hard time finishing one 200-gram baguette every day. Or maybe it's 250 grams. But that still puts us under the average, and we love bread and eat, I think, a lot of it. It's hard to imagine eating 900 grams of bread in one 24-hour period. People must not have had much else to eat. Or was the bread just that much better back then?

* * * * * * * *
Meanwhile, we have yellow water running from our taps these days. This happened once while I was in North Carolina. Walt turned on the tap one day and there was no water. After checking for problems in the house and outdoors (a burst hose, for example), he realized it was the water company doing work on the lines.

Yesterday morning about 9:00, I turned on the kitchen faucet and ... nothing! Not a drop or a drip. There was a truck out back and a team of guys were working on the sewer hookup for some of our neighbors. I went out and talked to one of them and he said their work wasn't the reason for the water cut. 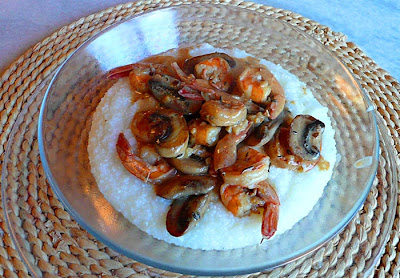 I made shrimp and grits again. I couldn't find okra,
and I had to use shrimp I bought cooked and frozen.
I put in mushrooms, some shrimp broth and cream,
and some garlic. It wasn't as good as the version
with okra that I made in N.C., but it wasn't bad.
He had seen the Compagnie des Eaux truck and a fire truck down at the bottom of the road. They were purging the bouches d'incendie, the fire hydrants. That must be the reason you have no water, he said.

When I got back home, the water was back on. Tant mieux ! Walt decided to get in the shower, and at the crucial moment when he was covered in soap lather from head to toe, suddenly the tap went dry again. Luckily, after just about a minute it came back on again, at least enough for him to get rinsed off.

At that point, I figured a phone call was in order. I called the number listed in our little village handbook, published by the mairie. It's a number beginning with 06, which means it's a cell phone. A man answered and I told him where I live and said the water was cut off. Did he know why?

Yes, we are cleaning out the fire hydrants, he said. And you will have yellow water for a couple of days now. Is it drinkable? I asked him. He was evasive. Don't you warn people? I asked, trying to be as polite as I could. Do you think we'll have water by noon so that we can cook our lunch?

His answer: we put up signs about the water outages in all the commerces in the village last week, and we even put some up on telephone poles up and down the main road. What could I say without sounding like somebody who loves to complain?

It's just another example of how you have to re-learn patience every day when you live in a small town out in the country in France. People don't get worked up about such things. I guess I need to go out and buy some water.

In fact, I guess that will teach me to get out more. I go to the village so seldom. Once in a while I go to the post office, and then I go down there to get my hair cut every couple of months. Otherwise, Saint-Aignan, with the pharmacy, the Saturday-morning farmers' market, and several supermarkets is no farther for me than the little village center. When I do go out, I head that way.
Posted by Ken Broadhurst at 16:39