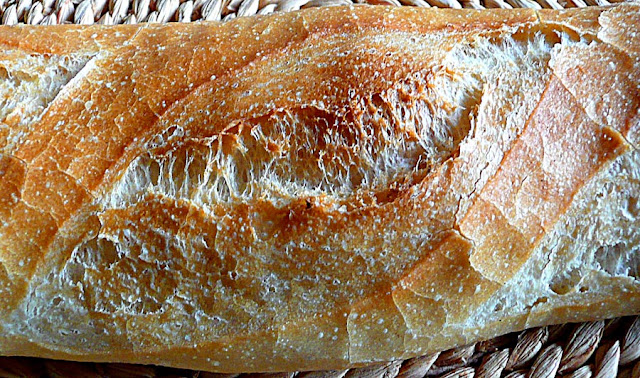 34,000 is the number I found on Wikipedia, which quotes figures from the French National Institute of Bread and Pastry Bakers — that was the number of artisan bread-bakers in business in France in 2004. That's almost as many boulangers as there are mayors of towns and villages in France (nearly 37,000). Every village has a mayor, but many no longer have a real boulanger.

The baguette brought by the bread lady this morning

Of course, most towns of any size at all have several bakeries. Saint-Aignan has four, I believe. It had five until about a year ago, when one closed up shop and the owner sold the building it was in. As often happens, that building, right on the market square in the center of town, was bought by some British people who are in the process of remodeling it.

This is a baguette ordinaire, non-moulée, which is cooked
directly on the floor of the stone oven and not in a metal
pan. It has a harder, crisper bottom crust that we like.

All the supermarkets sell bread, and I would almost have thought that most people get their daily bread from Intermarché, SuperU, or Champion. The figures say, however, that 70% of the bread consumed in France comes from artisan bakers' shops, boulangeries. An artisan boulanger is a baker who selects the raw materials, kneads the dough (almost always by machine, I'm sure), oversees the rising (or fermentation) process as well as the shaping of the loaves, and bakes the bread on the premises where it is sold. By law, at no time can any of the products that go into the making of the bread be frozen. 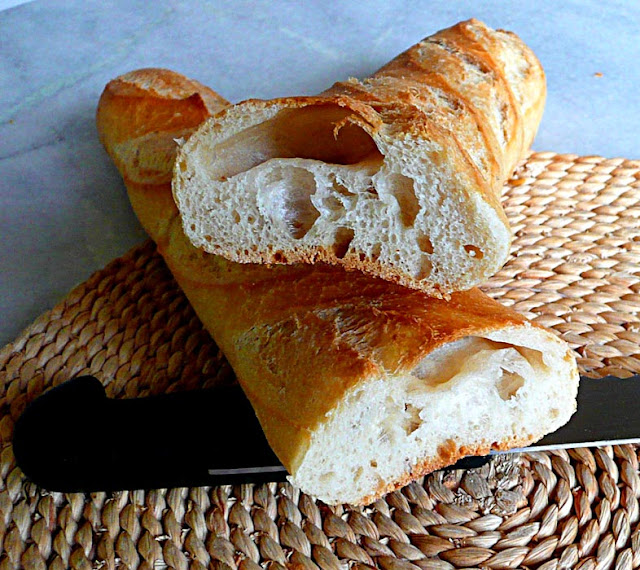 The mie or crumb of the delivered baguette — perfect, I think

I wonder what happens to all the bread that doesn't get bought in a day. The boulanger doesn't sell day-old bread, or I've never seen one that does. There must be a whole distributon network in France for stale bread. Maybe it gets fed to animals. Or maybe it is sold to the people who make and market dried breadcrumbs or prepared foods that use them as an ingredient. 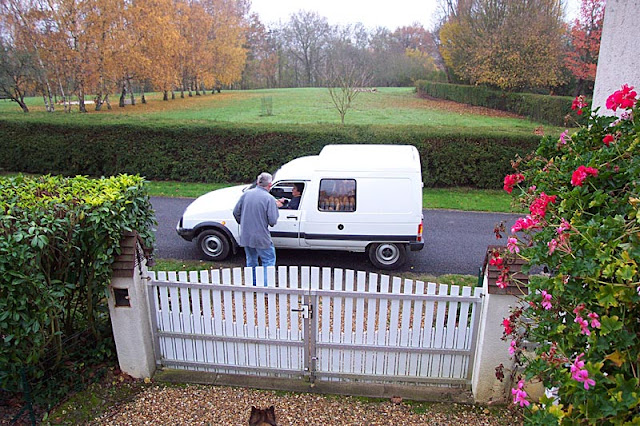 The bread lady in November 2004,
when we first started getting deliveries

By the way, the price of wheat in France has gone up through the roof over the past few weeks and months. I heard somebody say on the radio the other day that the cost of the wheat used in bread represents only three percent of the retail price. I assume that most of the price of a baguette is attrbutable to labor and energy costs. 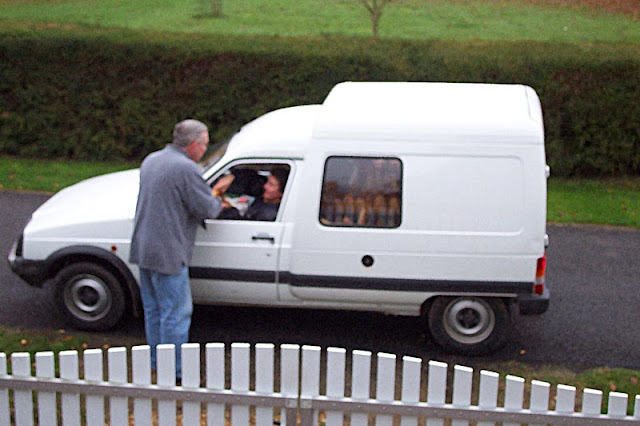 The pictures from 2004 are kind of blurry — tant pis

The price we pay for a baguette delivered to our door by Roselyne, however, has increased by only two cents, from €0.76 to $0.78. We pay a €0.03 delivery fee for each loaf we buy. A standard butter croissant costs €0.75. At the Robert boulangerie yesterday morning, I paid €0.80 for each of the two baguettes I bought. 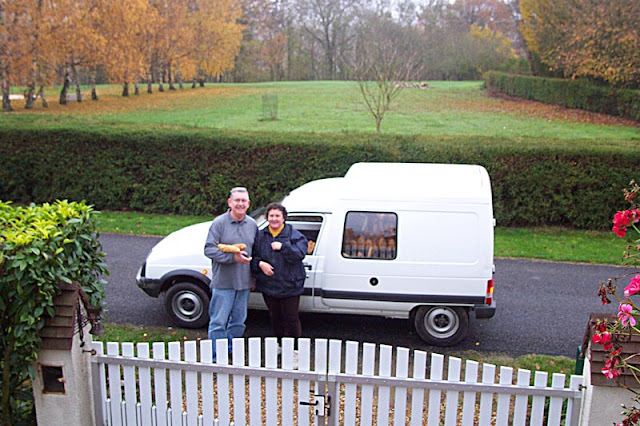 Me and the bread lady, Roselyne, in November 2004

Does anybody remember what a baguette cost in French francs before the euro was adopted as legal tender in France in January 2002? The current average price across France, I heard on the radio, is €0.80, or 5.25 FF. I find it hard to believe a baguette cost more than five francs in 2001.

I was convinced I had already posted pictures of the bread lady on this blog, but I searched and didn't find any. I hope Mary B., who requested a picture, is reading my post this morning. Here's a link to one that Walt published last year (and here's a link to the whole topic). Notice that Roselyne now has some advertising on the side of her LWV (little white van) that wasn't there in 2004.
Posted by Ken Broadhurst at 08:52