What's the first thing you do when you get back to Saint-Aignan after a long absence? And you are struggling with jet lag? You make a big pot of vegetable soup and you get some good French bread to have with it.

For me, the first full day back happened to be a Wednesday. What's the significance? No bread lady! The boulangerie in our village is closed on Wednesdays, so Roselyne takes the day off. I looked in the freezer. No bread except the sliced sandwich kind. But at least I found some frozen chicken broth. Out of the freezer and the refrigerator, I gathered together lots of vegetables: lentils, celery, carrots, onions, green peas, and some plain cooked spaghetti. 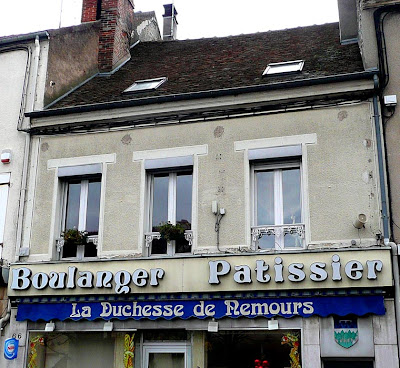 A boulangerie I noticed in Nemours
on the way home from the airport Tuesday
What choices did I have for bread? There are three or four boulangeries in Saint-Aignan, and there are two or three over in Noyers. All make good bread fresh daily. But the best bakery, in the opinion of many locals, is the boulangerie up in the vineyards, on the little road that links Saint-Aignan to the village called Céré-la-Ronde. The boulanger there cooks his baguettes, boules, croissants, and pains au chocolat in a wood-fired oven.

So at 11:00, with soup bubbling on the stove, I fired up the old Peugeot and headed out. The sun was shining. It had rained quite a bit the night before, making the dirt road through the vineyard a muddy mess. I knew, because I had walked out there with Callie earlier in the morning. That would normally be the shortest route from our house to the boulangerie-in-the-vineyard, which is in a place called Le Chêne du Renard (the Fox's Oak). 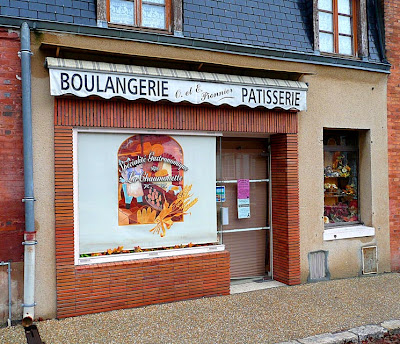 A boulangerie in the village called
La Ferté-Beauharnais, in Sologne
To avoid the mud holes, I had to go around. Down our paved road to the route départementale, turn right, and then make another quick right up the narrow rue de la Chotinière, past several new houses, some still not finished, and then a dozen or so older houses, and finally the old farm with caves carved into a cliff where equipment and supplies are stored. Into the woods for a few hundred yards, and then out into the vineyards.

Two or three turns later, I arrive at the Chêne du Renard. One customer was leaving as I arrived, and another was sitting in her Mercedes talking on a cell phone. She went in to buy her bread just as I was coming back out. 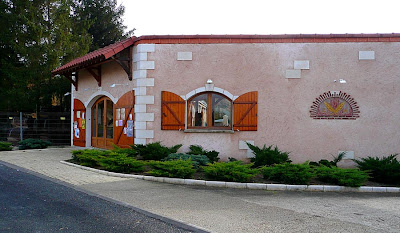 The boulangerie at Le Chêne du Renard near Saint-Aignan
The woman who sells bread knows me but only vaguely; since we have bread delivered five days a week, we don't get up there as often as we would otherwise. Everything looked and smelled really good, as you would expect, but the thing that stood out was a fougasse, a.k.a. a focaccia, a long flat bread adorned with lardons of smoked pork and covered with melted Gruyère cheese. Wouldn't some of that be good with a big bowl of vegetable soup?

Well, yes, it would. I took a slightly different route home, down the rue des Bas-Bonneaux to the edge of our village past several old farms and a dozen or more houses. Back to the route départementale, past the garage and a couple of B&Bs (chambres d'hôtes) to the rue de la Renaudière. Soup was on. The fougasse was delicious. I'm sorry I didn't take a picture of it. 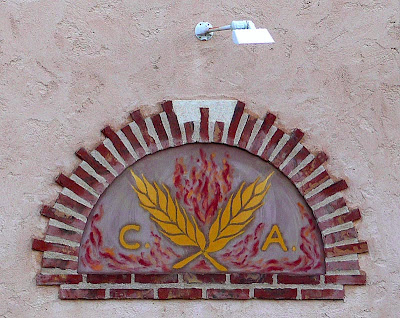 Emblem representing the door of an old bread oven
on the wall of the boulangerie at Le Chêne du Renard
This story doesn't have a punch line or any great significance. It just tries to describe a little bit of what life is like here. No stop lights, no shopping centers, narrow roads through vineyards, no traffic. I passed one or two cars on my four-mile round trip. The landscape looks wintry — there were several really cold mornings last week, Walt told me, and most of the leaves are off the vines and the trees — but the sun was shining low in the sky.

Today is Thanksgiving. That's not a holiday in France, and we are probably the only people for miles around who are even aware of the American celebration. Today I'm ready for more substantial food, and we are going to cook a piece of boneless leg of lamb with some flageolet beans. It's our Frenchified Thanksgiving dinner. But don't worry — Walt is making a pumpkin pie. We'll have a turkey (or a capon) at Christmas.
Posted by Ken Broadhurst at 08:57