...and the sun is shining. Walt had a taste of winter while I was away. I had a taste of summer while I was on the North Carolina coast. It has warmed up here in Saint-Aignan now: the low this morning was just 50ºF/10ºC. What is most striking to me is how muted and soft the light is here after the dazzling sunlight of N.C. reflected off all that blue water there.

Both my flights were late on Monday. The one from New Bern to Atlanta left 45 minutes behind schedule. However, we were only about 15 minutes late getting into Atlanta. That tells you how much the airlines pad their schedules so that they won't have to report high late-arrival statistics to the government, I guess. 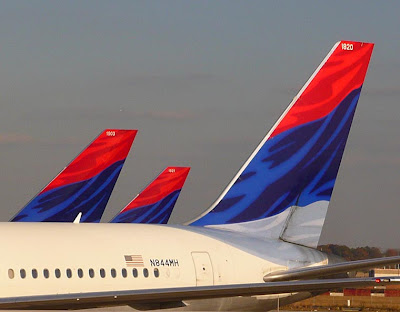 Delta Airlines jets at the Atlanta airport
The flight from Atlanta to Paris left about 40 minutes late and arrived about 40 minutes late. then we sat waiting on the taxiway for half an hour waiting for a gate to become available. Several people sitting near me were grumbling as they realized they had missed their connecting flights. 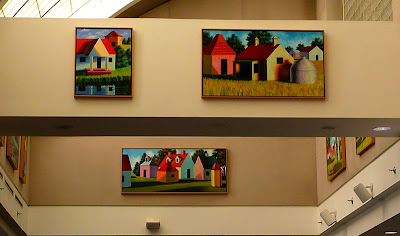 Artwork in the Atlanta airport
On our approach to Charles de Gaulle airport, we broke though the cloud layer just as we flew across the northern part of the Paris metro area. I had an aisle seat in the center section of the plane, but out a window across the the way the first thing I saw was the clump of skyscrapers at La Défense.

Then there was the Eiffel Tower, and the Tour Montparnasse. As we descended toward the runway at CDG, I could see the autoroutes that lead from Paris out to the airport and on northward. They were a solid stream of headlights in one direction, and a solid stream of red taillights in the other. Traffic was just barely moving. I thought of Walt and Callie sitting in the car off in the distance and figured I would have a long wait for them at the airport. 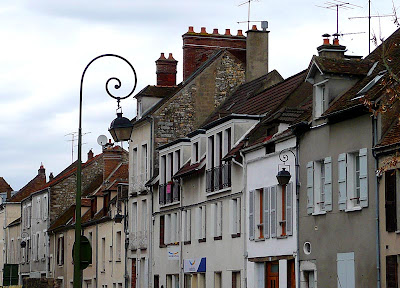 Back in France: a street in Nemours
My bags were the among the first 10 that came down the chute and onto the conveyor belt at baggage claim. I hauled them off the belt and onto a cart and was on my way. Then, for the first time ever, I believe, I was actually called over my two young French customs agents who wanted to know if I had anything to declare to the Douanes. And I've come through customs in France at least 30 times in my life.

No, I said, nothing. I had to search for my passport, which I had stuffed into my computer bag after I had shown it at passport control a few minutes earlier. The customs agents, a young man and a young woman, were surprised that I spoke French but had a U.S. passport. The young man wanted to inspect my bags. 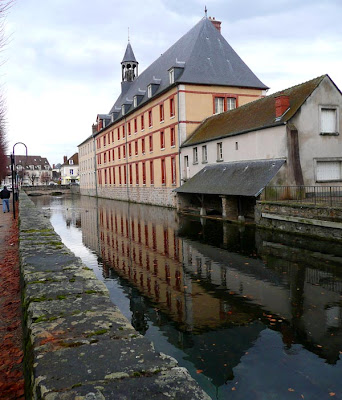 The Hôtel de Ville in Nemours and the canal behind it
He opened my carry-on, which was full of cellophane bags of dried hot red peppers I had bought at the Mexican grocery store in Morehead City. There were also two 50-count spindles of recordable DVDs and other odd items in there. Then he wanted to look at the big green canvas bag that I had stuffed to the gills with other items I had purchased during my three-week stay.

In the green bag, I had put all the bulkiest and heaviest things I had to bring back: a 5-lb. bag of masa harina, two 2-lb. bags of yellow cornmeal, two good-sized bottles of Listerine, three small cans of chipotle peppers in adobo sauce, and a big ziploc that I had filled with several hundred Rolaids tablets. 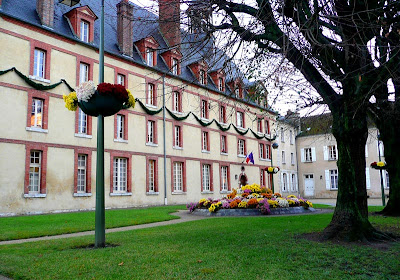 Fall flowers in Nemours
The agent's first comment was, why this is all food! I said yes, these were food products that I couldn't find out in the French countryside. He asked where I lived, but he had never heard of Saint-Aignan-sur-Cher. When he pulled out the Rolaids, his colleague said something like: What's that, ecstacy? I laughed and said they were antacid tablets. They are huge and must be hard to swallow, she said. No, you eat them like candy, I told her. She thought that was funny.

Meanwhile, she had pulled my new laptop computer out of my shoulder bag and was admiring it. All she asked me, however, was how much I paid for it. $500, I told her, and she rolled her eyes. I guess that sounded like a much lower price than she would have paid for such a machine in France. 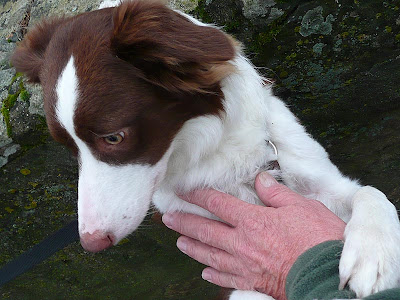 Callie was quiet, almost sullen, in the car during the ride to
and from the airport. When we got to Nemours and took her
out for a short walk, though, she came to me and jumped
up, wrapping her paws around my arm, to greet me. She
looked away from the camera when I snapped her picture.
The only other question she asked me was whether any of the items I was imported were destined to stay in France. Before I could answer, the other agent reminded her that I had said I lived in France and had shown them my Carte de Séjour. She looked embarrassed. Then they decided to let me go.

There was no way to re-pack the green canvas bag and zip it up again. We tried, and I finally said that we were going to break the zipper if we kept trying. As I said, the bag was really stuffed to the gills. "Somebody is coming to pick me up and drive me back to Saint-Aignan," I said. The open bag wouldn't matter. "Oh, you are not taking the train?" the young man asked me. "The train!" I exclaimed. "But they are all on strike!" Then he looked embarrassed.

Walt arrived not more than five minutes after I exited from the French customs checkpoint and we drove on home. We found roads farther out from the city (the A-104 to Melun, and then on to Fontainebleau) where traffic was flowing freely. We stopped and had lunch in Nemours. It rained some. Callie stayed huddled down on the back seat, on her towel. We arrived in Saint-Aignan at 4:00 p.m.
Posted by Ken Broadhurst at 09:48