It's interesting that people know what a good baguette "should taste like." We obviously carry around an abstraction in our head and tastebuds, because every baker's baguette is different. And in reality, people don't agree at all about what constitutes a good baguette. 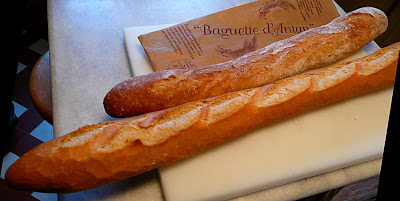 Today's bread — I got it from the boulangerie Robert
in Noyers-sur-Cher. The shorter one is a baguette
de tradition and the longer one is called
a flûte (200 g), but I'd just call it a baguette.
In fact I just asked for a baguette and that's what I got.
We like the baguettes that come from the bakery in our village and that Roselyne delivers to our door five times a week. Our neighbors across the street, however, find that bread trop sec — too dry. They often buy bread at the Champion supermarket, which, I agree, has a pretty good bakery. But the Champion bread doesn't compare to our village baker's version, IMO. 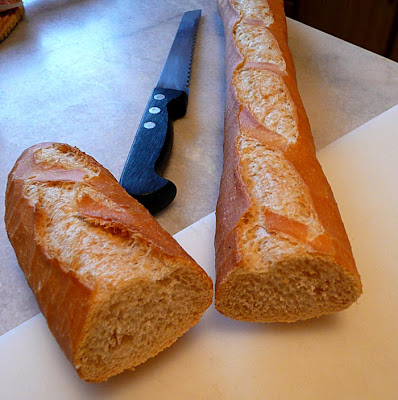 Robert's flûte, showing the mie, or crumb.
I just ate some with butter and confiture. The crust is light
and crunchy, and the white part is tender and tasty.
Most people seem to think the bread made at the boulangerie-in-the-vineyard is very good, but at least one person I know thinks the crust on those baguettes is too hard. The last one we got had a very elastic mie (the crumb, or the white part). It was a little too elastic for me, in fact. 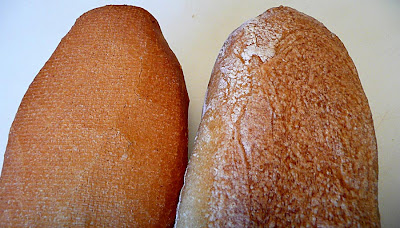 Did I mention the difference between a baguette moulée (l.)
and a baguette ordinaire (r.)? You can see it in the picture.
Moulée means the baguette is cooked on a metal
plaque or tray. Ordinaire or non-moulée means it is
cooked directly on the stone floor of the oven.
One of our best bakeries for pastries, everybody seems to agree, is Robert in Noyers-sur-Cher. I like the bread M. Robert makes too, but more than once I've heard local people say it's not worth going to Robert's for bread. They don't like it. 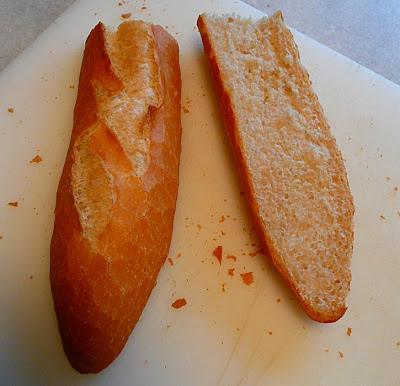 The flûte, ready to be made into a tartine
Each boulangerie's baguette is distinctively different from the others'. I guess that's what's good and interesting about French bread. Unlike industrial fast food, where uniformity is the rule, baguettes differ from one another just enough that you can take pleasure in trying to find the best one, hoping that one day you will taste perfection.
Posted by Ken Broadhurst at 08:46