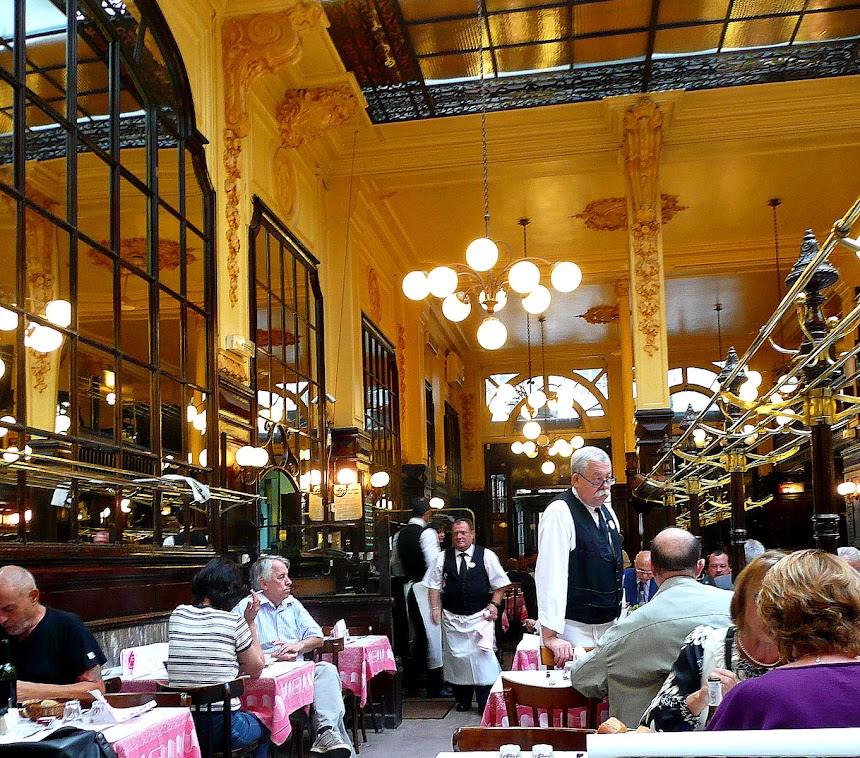 What the French above says is that a bouillon is a low-cost, fixed-price restaurant that was invented in the 19th century. Originally such restaurants served boiled beef in its own bouillon. The servings were large. Over time other dishes were added to the menu. Here's Chartier's current menu — these are just the main courses:

One of the reasons I decided to go have lunch chez Chartier with my sister and our friend was that I had had dinner there twice back in 1997 with my mother and my sister's then-15-year-old daughter. They really liked it, especially my niece. Our youngish waiter flirted with her and she was in heaven. She wanted nothing more than to go back chez Chartier as soon as possible for another dinner, and we did. The food there is good if not great, the prices are not high, and the atmosphere is memorable. Here's a link to a page where you can view the other parts of the menu — appetizers, vegetables, desserts, etc. 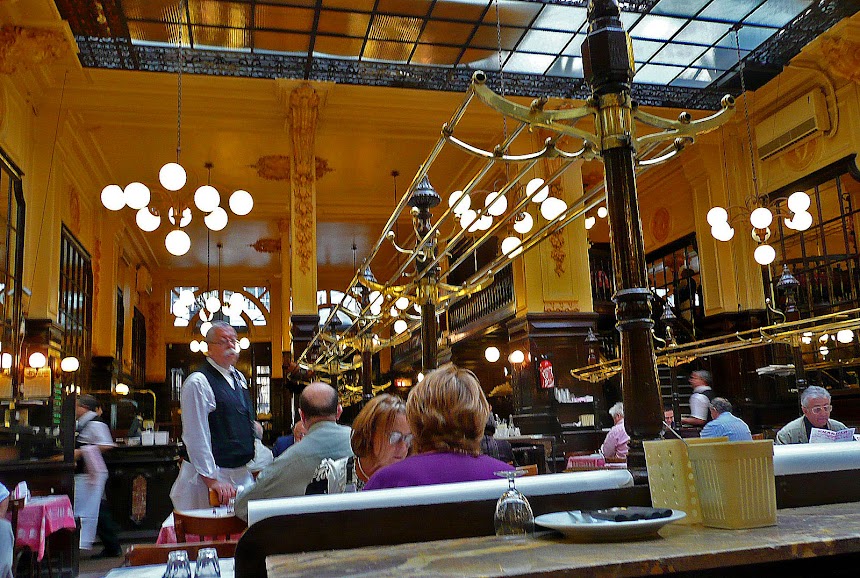 Chartier now has a second restaurant on the Left Bank, at Montparnasse, and very close to the Tour Montparnasse  skyscraper. Anyway, with my mother and niece in 1997, we had a second dinner chez Chartier. We were shown into the restaurant and seated at a table in a different location from the first time. The flirty waiter didn't wait on us, and my niece was crushed. As our food came, however, the young waiter noticed us and, as soon as he had a minute, he came over to say hello to us. He took my niece's hand and kissed it gallantly. I thought she was going to faint. It was all a lot of fun. That's Chartier for you — fun, memorable, decent French food, an informal atmosphere, and not a big investment. 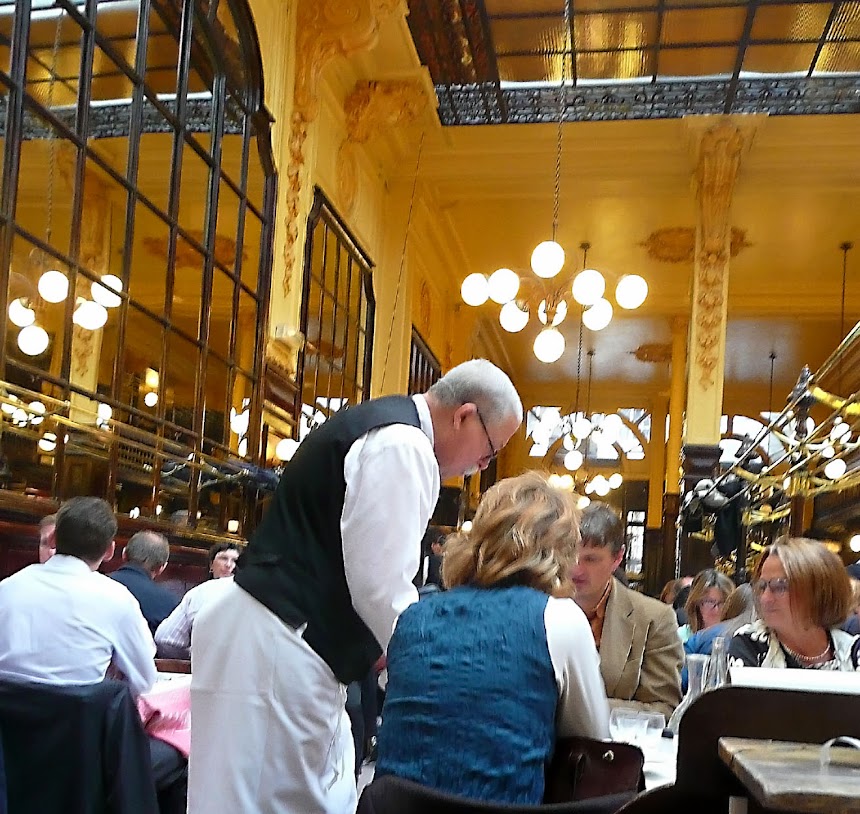 Be aware that Chartier doesn't take reservations, and the line to get in can be long. The waiters wear what you might consider to be a costume. The tablecloths are covered with paper so they don't get stained by spills. The waiters write down your order on the table paper, and then add up your bill on it too. Bread baskets get passed from one table to another, with some pieces of baguette added as needed. Don't be surprised if you are seated at a table with people you don't know and who got there ahead of you. 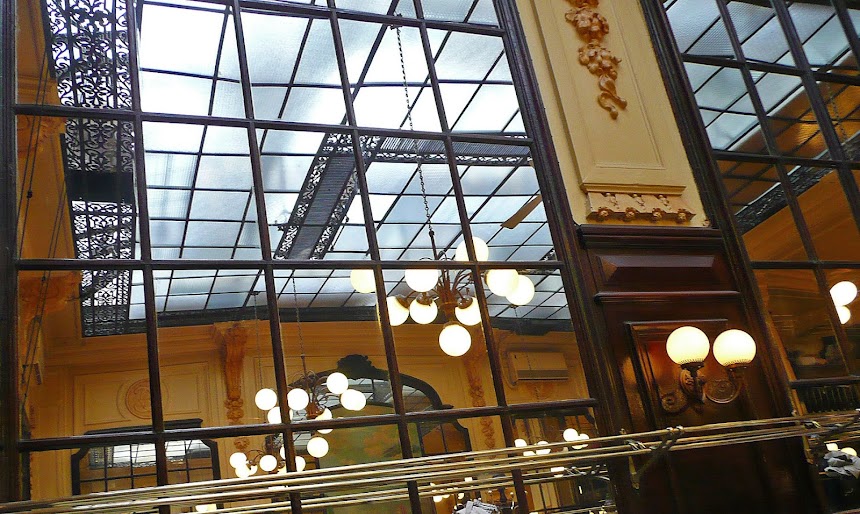 Let's see if this link to a 360º view of the interior of the restaurant works. And here's a link to a photo gallery on the restaurant's web site. Finally, here's a link to a post I wrote about our lunch chez Chartier 13 years ago, with more details about the food and our interactions with the staff. When I lived in Paris (1979-82), my apartment wasn't a very long walk from chez Chartier. I wasn't earning a lot of money as a teacher, so I went there often when I wanted a restaurant meal. As CHM mentioned, I took him to Chartier once, maybe 10 or 12 years ago. 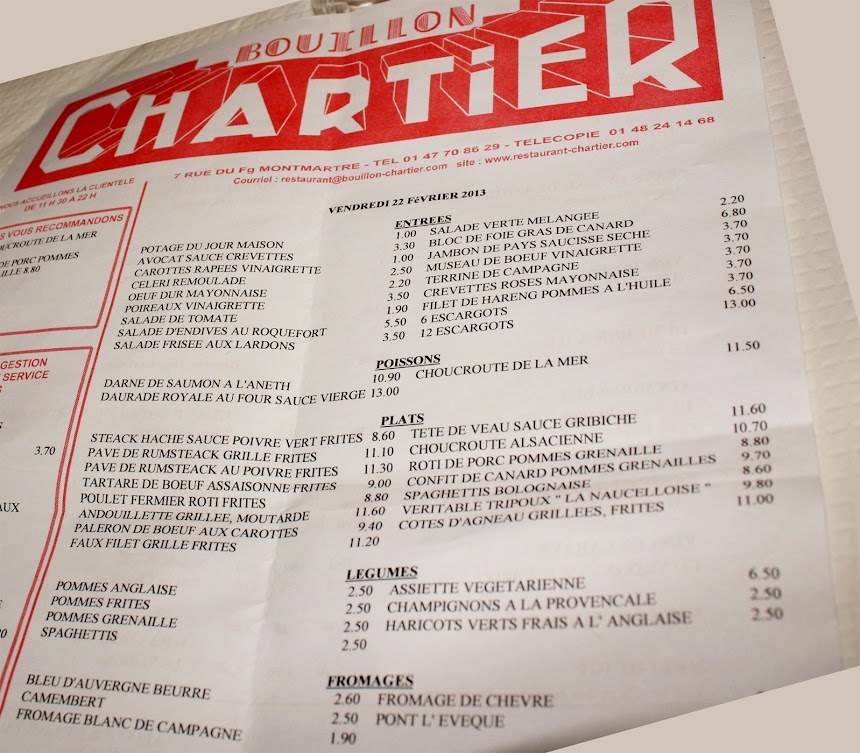 Above is Chartier's menu as you see it in the restaurant.
Posted by Ken Broadhurst at 06:24