Yesterday's high temperature on our outdoor thermometer was only 30.4ºC — see the temperature conversion table on the right for the ºF equivalent. This morning, the temperature outside is about 21ºC. I got up at 4 a.m. and started opening windows and shutters to let the cool air in. So far, sleeping is comfortable and the house isn't too hot (23.4ºC). 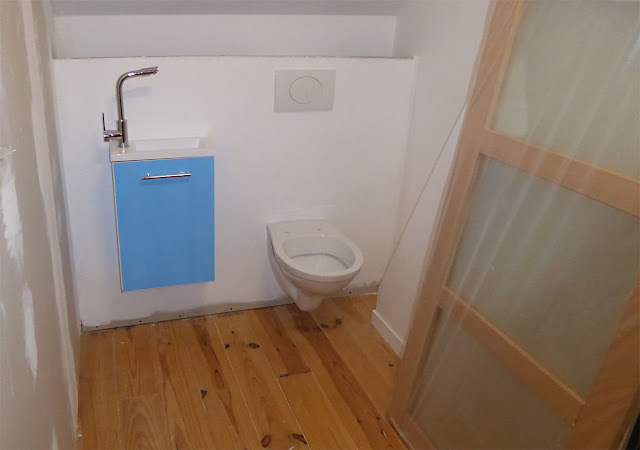 Meanwhile, progress continues on the new "facilities" upstairs in the loft. Detail work remains to be done up there — a shelf on the ledge over the sink and toilet, baseboards all around the inside and outside of the room, a toilet seat, the pocket door, a couple of coats of paint — but the focus is now shifting to the work needed in the downstairs bathroom and throne room. Pipes between the downstairs half-bath and the upstairs half-bath still need to be connected together. 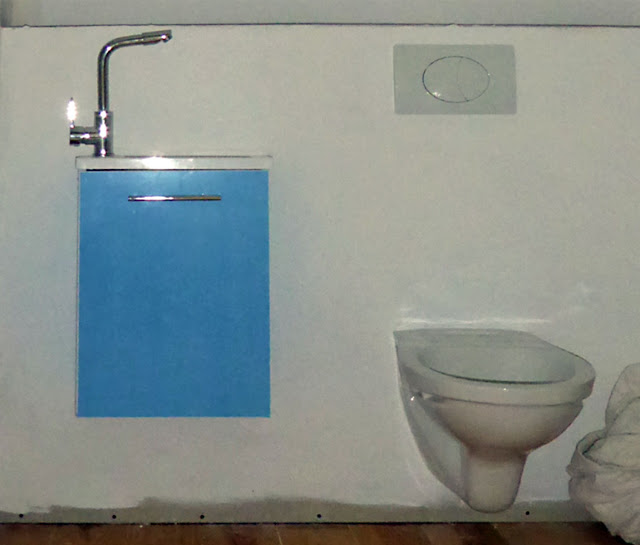 Yesterday the building contractors boxed in the big drain pipe that runs from the new "loo" down through the floor and along a corner of the bathroom. The resulting column will be painted the same color as the walls. We'll be getting a new "wall-hung" toilet in the downstairs petit coin too. Both toilets will drain through the same pipe out to the sewer mains.

I happened upon a nice light fixture for the new W.C. on amazon.fr last week, and I ordered it. After I did, I got worried that at just 600 lumens of éclairage it was going to be too dim. Doesn't it look like something you'd see in the Starship Enterprise?

It came yesterday and the contractors installed it. Walt got up a few minutes ago — it was still pretty dark outside and in the loft — and switched on the new loo light. "It's almost blinding," he said. That means it's fine and bright enough for the space. 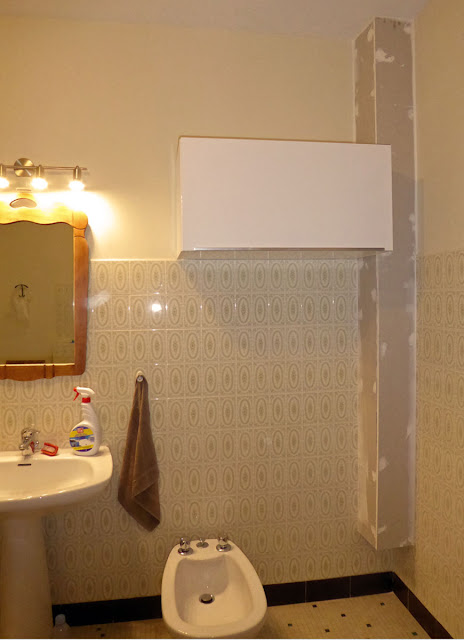 Here's that boxed-in pipe in the bathroom downstairs. Not much of it will be visible, because under the white cabinet we have a little brown wood cabinet that we moved out of the way for the duration of the construction project. We'll paint the column to match the walls. And yes, that's a bidet next to the sink. We've kept it because it's a nice French touch in the room.


I was just looking at the MétéoFrance web site, and they appear to have lowered temperature predictions for the rest of the week. They say we might have temps of 34, 35 or 36ºC, instead of 39 or 40 degrees. The other site we follow, MétéoCiel, actually has the highs Wednesday through Friday two or three degrees lower. That's significant, and better.