Things you do while the power is out. Mostly, you sit around hoping to see all the digital clocks suddenly light up, blinking 00:00 or some obviously off-the-wall time of day. Then you'll be able to reset the clocks, turn on the lights, and get back to what we of the 21st century see as a normal existence.

You'll be able to run the vacuum cleaner, wash some clothes, turn on the dishwasher, watch something on the satellite TV, and read some blogs, e-mails, and newspapers on the computer. Bake a cake. Heat up your coffee in the microwave. Now we can do all that, because Gilbert a.k.a. Monsieur Cent Mille Watts is purring contentedly out by the pond, guzzling 400 liters of diesel fuel. 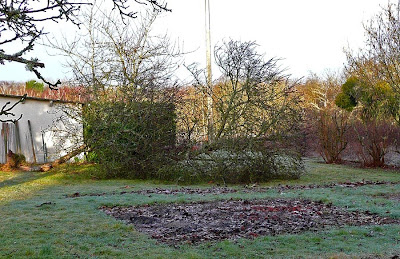 Trees are a renewable energy resource.
With our roof repaired, we had few real worries. We could thank goodness we had changed out our all-electric kitchen stove a couple of years ago for a mixte model with three burners that are fired by bottled gas. We had run out of cut wood, but we also had recently acquired an old gas-powered chainsaw, and Walt was able to get it started. The electric chainsaw made a good doorstop during the dark days. 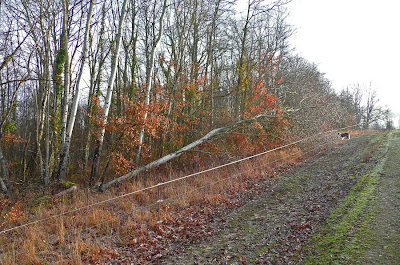 Callie inspecting the damage
It was also good that we had an old corded telephone that doesn't require being plugged in to a power block. We were connected by wire to the outside world, at least. Our other contact with the outside world was walks with the dog, which require only renewable energy sources.

About 24 hours after the storm ended, we were cooking our lunch on the wood stove — just because we could. We pulled some roasted duck legs out of the rapidly defrosting upstairs freezer, along with a left-over block of some soup I'd made and stuck in the freezer months ago. Why not just heat all that up on the woodstove, rather than using up more precious butane? 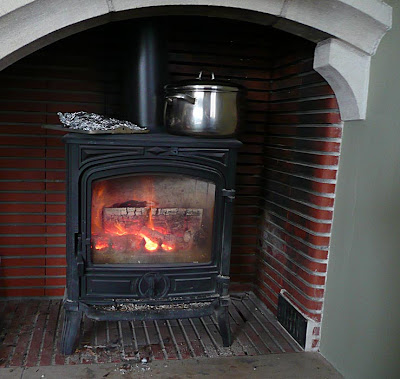 Heating up lunch on the hot wood stove
A day later, Xynthia + 48 hours, I was cleaning out the refrigerator's freezer compartment and flushing a lot of thawed broths and soups down the toilet. I'm sure some of what I flushed would have been good to eat, but none of it was appetizing any more. Walt had started his pre-procedure diet, so he couldn't eat much more than rice and boiled eggs. I had some more bean soup. The power would flicker back on any minute, we were sure.

By the way, the toilet got a workout this week. 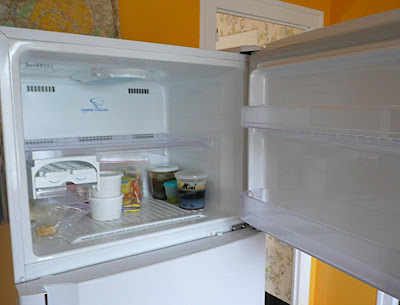 The bright side: a clean, uncluttered freezer in the kitchen
On Wednesday, we went across the street and cleaned out our summer-resident friends' freezer. They had called and asked us to look after it, if we could, because B. is in the hospital for a hip replacement and M. doesn't drive. Mostly what we found in their little freezer was boxes of ice cream bars that they keep for their grand-children's visits. Those were melting and dripping. 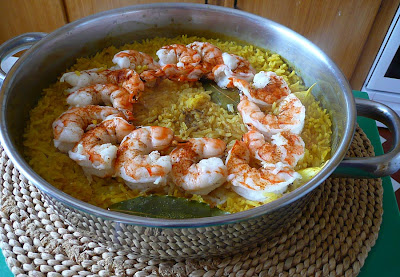 Shrimp and rice were on the pre-procedure diet.
But there was also a box of jumbo shrimp that had just barely started to thaw out. Lunch! Walt's diet said he could eat rice, eggs, and fish. Shrimp are fish, right? And the diet said nothing about Thai fish sauce, curry powder, hot paprika, and sesame oil being banned. I phoned M. back and thanked her for the seafood windfall. 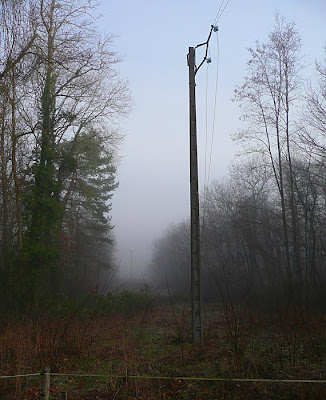 It was on Monday that I realized what the
cause of our power failure was... 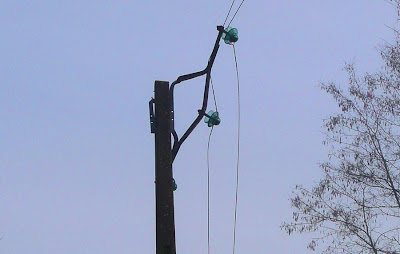 ...a falling tree had pulled down the wires.
By Wednesday (X. + 72), it was no fun any more. I was sure the big freezer was going to be a mass of muck when we finally opened it. I guess it was good that I stuffed it completely full of frozen items from the small freezer on Sunday morning, because all the contents appear to have survived. Wednesday was also the big C - 24 hrs., and things were getting serious for Walt. He had that behind-the-ear washing to do.

And we had no hot water left at all. We'd been taking bird baths for a few days, heating up some water in the tea kettle and pouring it, steaming, into a plastic basin for transport into the bathroom. We hadn't even tried washing our hair. 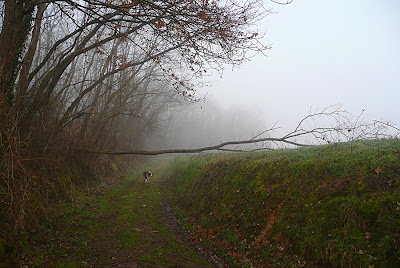 Callie passing under another casualty of the storm
We called American friends who have bought a house five or six miles up the river from us in a little village called Couffy. They had gotten their power back on Sunday night — no big tree fell on their wires. They said, sure, come on over and have a shower, and a glass of wine, this afternoon.

I had gotten tired of taking pictures by then. I couldn't really look at them, anyway, because the battery in the laptop computer was getting very low. And I certainly couldn't post them. Two uprooted plum trees, which we will replace
with at least one cherry tree
Then late Wednesday night we saw yellow flashing lights outside and heard big trucks rumbling up the road. We looked out and saw Annick the mayor and other neighbors consulting with a crew of ERDF workmen and technicians. They unloaded Gilbert, wired him up to a transformer on a light pole out by the pond, and suddenly we had light. And all the mod cons.

It came just in time for W's final pre-operation shower with those little vials of savon anti-bactérien.
Posted by Ken Broadhurst at 08:21