Yesterday morning, I picked up Joël Robuchon's book full of potato recipes and looked at the cover. The picture is of potato chips, I think, but it just made me think of thinly sliced potatoes, ones you might use to make a gratin dauphinois cooked with milk, cream, and cheese. I've posted a recipe for that dish before — exactly a year ago, as it happens. 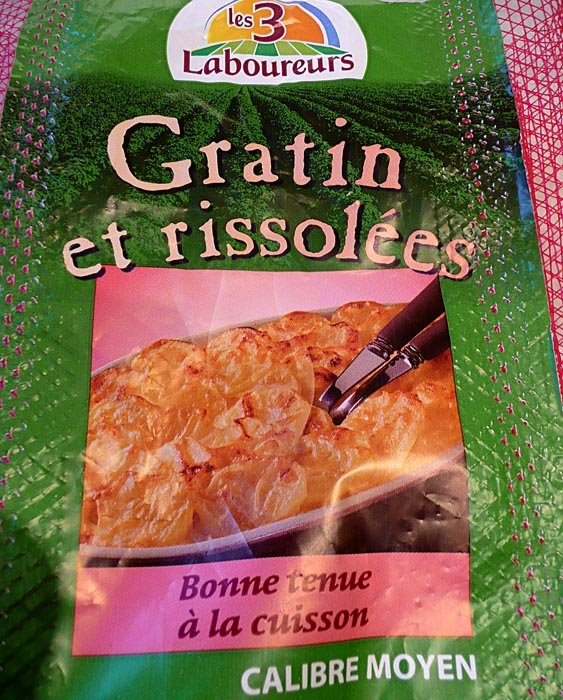 These were the little red potatoes.

Then I looked at the bag that my potatoes were in. What does the label show? A gratin plus ou moins dauphinois. Things were becoming clear. And then I remembered a recipe from a book I recently got in the mail. 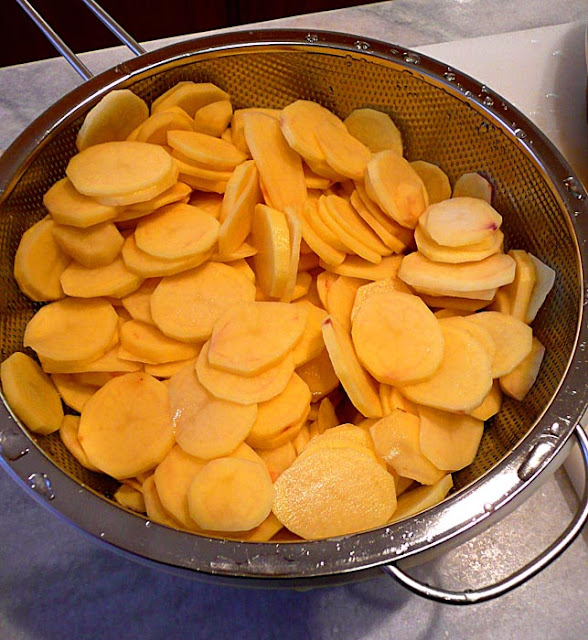 Now I have to say this blogging thing is working out nicely. Just in the past couple of months, two people I've met and who read the blog have sent me cookbooks! I encourage all of you to do the same (just joking). BettyAnn, a frequent commenter and May visitor, sent me a Loire Valley cookbook. Out of that book, I made a pork roast with baked apples when Peter and Jill Hertzmann were here in September. It was a success. I also made rillons — cubes of pork breast cooked in duck or pork fat — which we enjoyed with visitors Carolyn and her husband a few weeks ago. 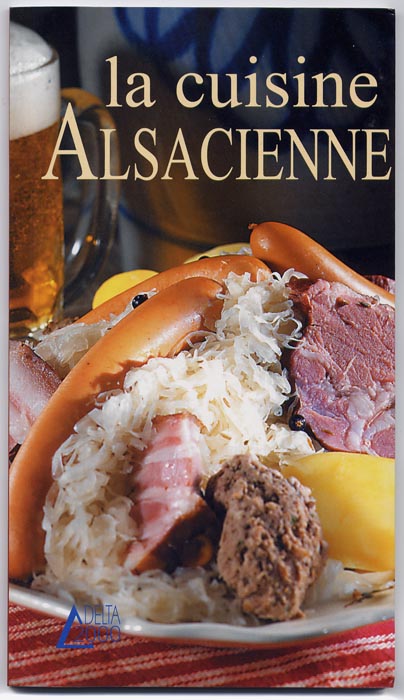 And then last week I got another cookbook in the mail. Thank you, Ladybird (Martine). It's a book of recipes from the Alsace, a region I've never visited but a cuisine I like very much (especially sauerkraut, choucroute garnie, for which the season is approaching). And in the Alsace cookbook that Martine sent, I had seen a recipe for something called Pommes de terre fumées. "Smoked potatoes" — it's an eye-catching title. 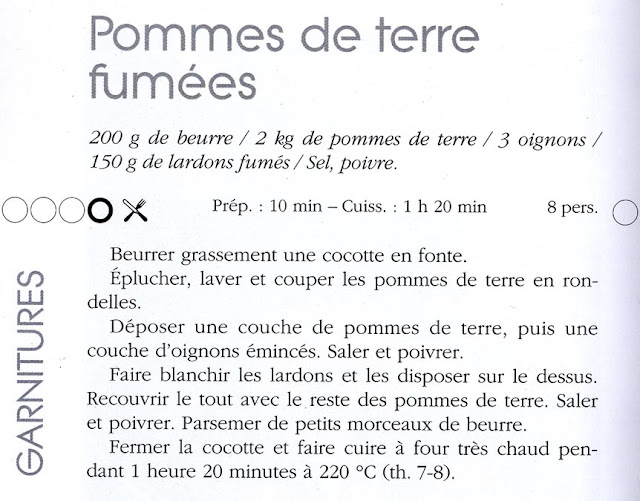 In fact, it is a potato gratin with onions and smoked pork lardons, or bacon. I happened to have some lardons in the fridge. So I decided to make pommes de terre fumées for lunch yesterday, to accompany the boudins blancs. Again, it was a success — even if I do say so myself. 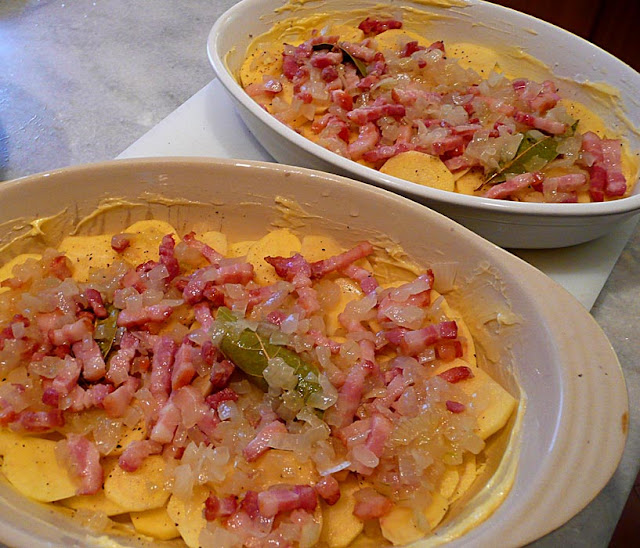 A layer of potatoes, a layer of pre-cooked lardons and onions

Here's a translation of the potato recipe.

Peel, wash, and cut the potatoes into thin disks.

Blanch the smoked bacon (if you think it is too smoky- or salty-tasting) and put down a layer of bacon over the onions. Cover the dish with the rest of the sliced potatoes. Sprinkle salt and pepper over all, and then dot the top generously with butter. 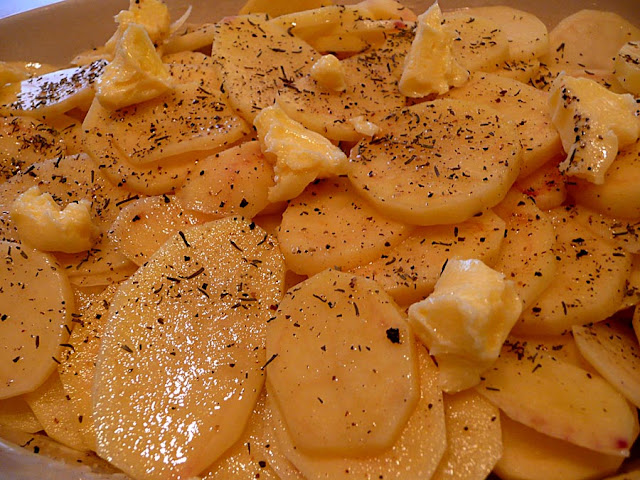 The top layer of potatoes dotted with butter


I didn't blanch the bacon because the lardons I buy are smoky but not excessively so — sometimes French smoked pork belly is extremely smoky and salty and the flavor needs toning down. And I chopped the onion and cooked it along with the lardons in a skillet before I put it as a layer between the two layers of potatoes. You could do the same with bacon, and it think you do need to lightly cook the bacon before you put it in the cooking dish. It doesn't hurt to pre-cook the onions also. 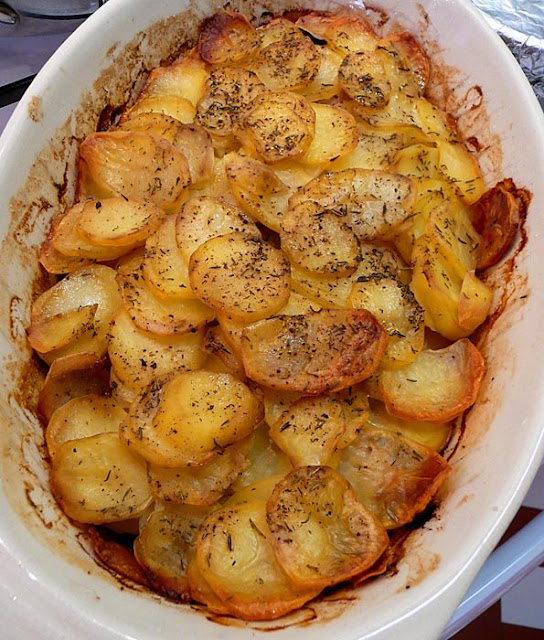 Here are the potatoes as they came out of the oven.

Because I like these flavorings, I also added a dash of allspice, a couple of bay leaves, and a little pinch of dried thyme to each dish — I used shallow baking dishes so I ended up with two pans of potatoes. I guess I could have used a deeper earthenware dish. 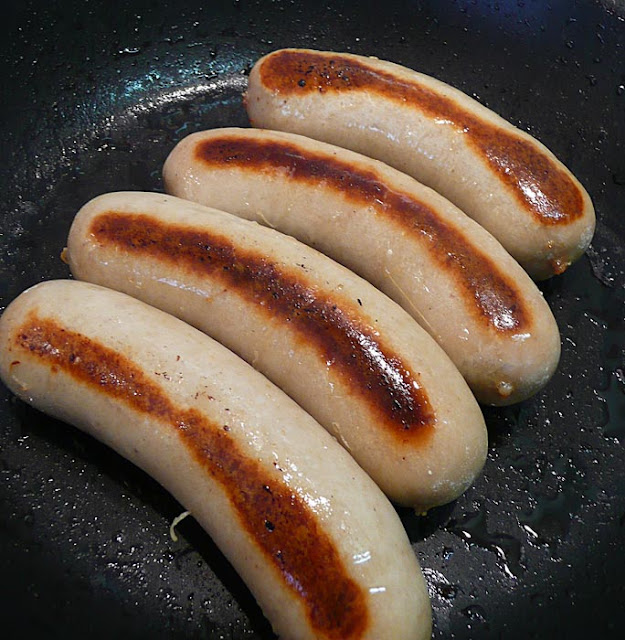 And here are the boudins blancs.
Any sausages would be good with the smoked potatoes.

It was good. These boudins were basically turkey sausages. Chicken or duck sausages would be excellent with the potatoes. As would fresh pork saucisses de Toulouse, or smoked saucisses de Montbéliard. Or a grilled chicken breast. For example. And with the meat and potatoes, have a nice tossed salad.
Posted by Ken Broadhurst at 07:02