Speaking of corn pone, the version we made tasted very good, no doubt about it. The main difference I see between my old recipes for cornbread and the one for this corn pone is that there's wheat flour in the bread but not in the pone. Cornbread is often or even usually made with about three parts meal and 1 part wheat flour — though adding flour is more a Northern than a Southern habit, according to everything I read. Maybe that's some kind of stereotype.

I think I forgot to mention that the book in which I found the pone recipe was a gift in September 1979 from a French woman I worked with as a graduate student and French teacher in Champaign, Illinois, all those years ago. Her name was Nelly, and if I remember correctly she was originally from the town of Châtellerault, which is fairly close to Saint-Aignan. I lost touch with her and her American husband, Chick, when we all left Illinois for other regions and countries — I was leaving that September for a stay of more or less indefinite length in France. 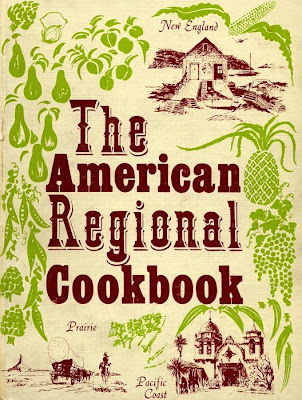 Nelly recognized a good American cookbook
when she saw one
Maybe a difference between corn pone and corn bread is the kind of corn meal that you use in one or the other. The recipe I used mentioned that it should be made with water-ground meal. Maybe that's the more commonly used kind of meal in the South. I think I used stone-ground white cornmeal, because that's what I had. I'm not too sure what the difference might be.

The cornmeal that BettyAnn brought me in May comes from Abbitt's Mill in Williamston, N.C. It's yellow, and on the package they specify that it is "unbolted." I'm not sure what that means. It is also stone-ground. The recipe for cornbread on the back of the package calls for just 4 ingredients: meal, salt, lard, and boiling water. I have to try that, since I have some lard in the fridge. (Incidentally, I hear that lard is all the rage now in certain trendy San Francisco restaurants. One chef reportedly serves it as a spread, like butter, to be eaten on bread.)

At the end of the day, as they say in England, I bet all these names — cornbread, corn pone, johnnycake, hoecake, ash cake, skillet bread, spider bread, and batter bread, not to mention hush puppies, corn dodgers, and spoon bread — are just regional variations, or names favored at different points in time, on what is basically the same thing. Some are made with eggs, some not. Some include wheat flour. Some add sugar. Some are cooked in an oven, others in a frying pan, and still others in a deep-fat fryer.

Here's a web page that says about the same thing: foodreference.com. Susie and Judy, I guess that is my answer to the question about any difference between cornpone and cornbread. Pone by any other name — cornbread, for example — smells as sweet.

You have to admit that the term "corn pone" is charged with strong cultural and social connotations.

It seems to be that in the South people have always made their cornbread/pone using white cornmeal, whereas in the North people preferred yellow meal. The meal from Abbitt's is yellow, however. All these things change over time and different products come and go.

This is my mother's recipe for Buttermilk Cornbread. Notice it has flour in it:

Another book I have, Southern Food: At Home, On the Road, In History, by John Egerton, gives this recipe for corn pone. It's about the same as the one for cornbread on the Abbitt's cornmeal packaging:

Put 2 cups of plain white cornmeal in a mixing bowl, add 1 teaspoon of salt and 1 tablespoon of bacon grease, and then slowly stir in enough boiling water to make a mush that is thick and wet and substantial—neither stiff nor runny...

There is no mention of eggs, flour, baking soda, baking powder, or milk of any kind. The recipe goes on to say the corn mush can be shaped into patties and cooked on a griddle or in a skillet or on a backing sheet in a hot oven. It can also be cooked in a baking pan.

Tom, I've always known Harriett as a person of impeccable refinement and discernment. She's not one to let a little expression like "corn-pone" prevent her from enjoying the good things in this life. Do you think she'd be willing to share her recipe?

CHM, I've never had gaudes but reading about it/them makes me think of grits or polenta. I guess the torréfaction of the cornmeal or grits would make a nice difference in taste. I might try toasting some polenta in a dry skillet on the stove to see if that changes the taste after the polenta is cooked in water. And congratulations on the availability of greens. Yes, mustard greens are mighty good.

BettyAnn and Sam, I went to SuperU yesterday morning to look for semoule de maïs. No luck. I've never seen it on the shelves there. I asked at the customer service desk, but got only blank stares. I can find polenta, but that's more like grits than meal.

BettyAnn, I will be eternally in your debt for those two bags of cornmeal. I guess I need to bring the equivalent weight of goat cheese to you when I come to N.C. next winter.

Sam, we don't have bio (organic) food stores in Saint-Aignan. We're not that up to date — though the two larger supermarkets have organic-food sections. (Bio or biologique is the French term for "organic.") 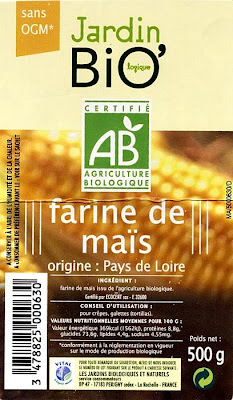 This is the label from the package of finely ground
cornmeal that I found at Intermarché a few weeks ago.
Farine de maïs means "corn flower" and bio is organic.
Sans OGM = Sans organismes génétiquement modifiés.
Did you all notice that commenter Ben called Walt a "good old boy" the other day? For somebody who grew up in the capital city of the State of New York — not exactly "corn pone" country — that was hard to take. Now that you and Ben know that Walt and I like to cook and eat things like corn pone, well... you'll draw your own conclusions.
Posted by Ken Broadhurst at 08:13