Cutting up the cut-down tree

I had a really bad allergy attack yesterday. There is a big high-pressure system sitting over Eastern Europe, bringing France a southeasterly airflow. That means a lot of pollen from Provence, Italy, and Greece, I guess. Cypress pollen is what I'm most allergic to, unless there's some kind of pollen here that we didn't have in California and that I haven't been tested for. Whatever it was on Saturday, it made me miserable all day long. 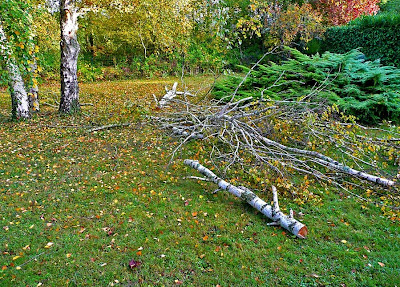 On Thursday, we tackled the job of cutting up the top of the birch tree that we had chopped off a couple of days earlier. In this first picture, we hadn't yet started. It was early in the morning and kind of cloudy, so there were no shadows. 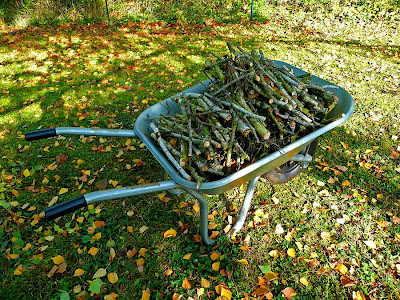 Walt cut up the two large pieces of tree-trunk with the chain saw while I worked on smaller branches with the secatur. I ended up with this wheelbarrow load of twigs and sticks, which will make good kindling. 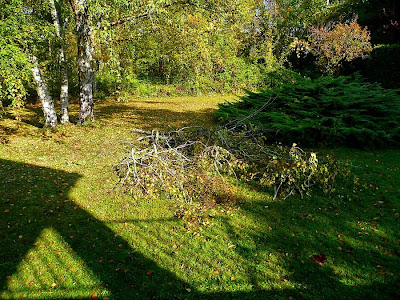 By the time we had finished, the sun was out and there were distinct shadows. Walt had finished cutting up the main trunks. You can see what is still left to do — smaller branches and twigs. 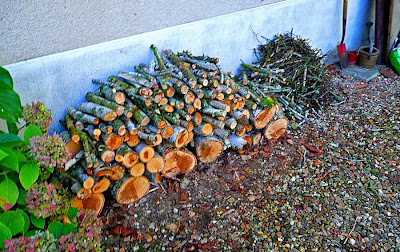 And this is all we got for a couple of hours of labor. Oh well. It will make a nice fire or two next winter or the winter after, after the wood has had time to dry out.

P.S. The sneezing and crying and nose-blowing seem to be finished now, for the time being. I think these 24-hour allergy attacks are so strange. When I lived in California, the attacks would last for days or weeks at a time, but usually in the spring. Here, I have 24-hour bouts several times a year — fall, winter, and spring. The main thing is, I feel better today. I'll be able to do some more work outdoors.
Posted by Ken Broadhurst at 07:30