At this time of year, the sun is low in the sky. But we are seeing it often, and it's pleasant in the afternoon. Shadows are long and distinct. 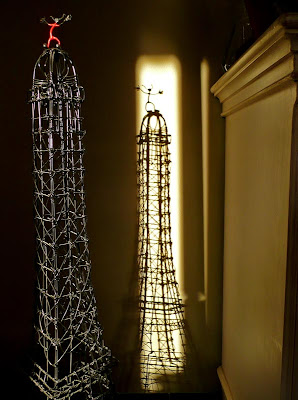 Sun on the little tower in the dining room
That's true of shadows even inside the house. Again, that's nice except that it makes the windows look so dusty and streaky. Right now, morning rays of sun through the kitchen window shine all the way into the dining room and light up not only the walls but our Eiffel Tower model.

One year when we went to Paris on vacation, Walt bought a little Eiffel Tower replica in a souvenir shop. We still lived in California. Friends there saw the replica and started giving W. little Eiffel Towers of all kinds as presents on his birthday and at Christmas. 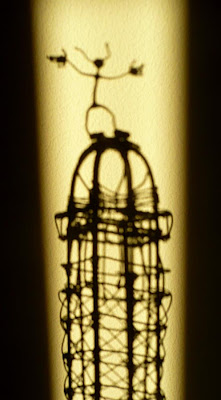 Top of the tower as a shadow
Later, he did a photo series on Eiffel Towers on his blog that you might have seen. The one in these pictures is by far the largest. The little wire figure on top of it was a gift (a stocking-stuffer) from a friend's daughter the same year, coincidentally, as the wire large tower. They've been inseparable ever since.

Outdoors, sunny weather means the hedge work continues. Yesterday W. finished trimming another section along the street. It's the section of hedge that we see from our kitchen window, along with the neighbors' house across the road. The neighbors happened to be here yesterday afternoon. 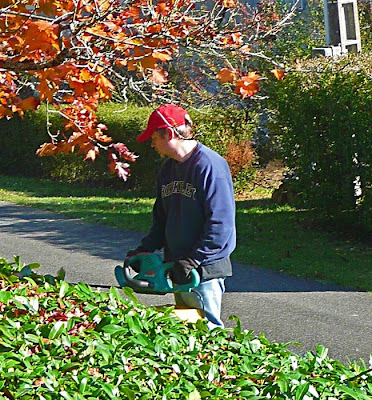 Hedge trimming, 23 October 2008
Madame M. walked over to admire Walt's work. She approved and said it looked impeccable, waving a hand in the direction of the long piece of neatly clipped hedge that runs along the road out back. 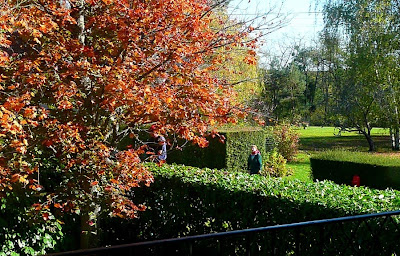 Madame M. stepped across the street to admire the hedge.
I stepped out on the terrace the shout a bonjour in Mme M.'s direction and tell her I was inside watching a movie on TV while W. worked. I wanted her to know that, because several times over the summer she happened to walk over while I was working in the yard or garden and Walt was sitting and resting. She had no way of knowing that he had just finished some big job himself and was rewarding himself with a sit-down and a cold drink.

« On fait le lézard ?» was what she said to him once, accusing him of looking like a lizard basking in the sun while his partner — yours truly — worked up a sweat tilling or weeding or digging. It happened two or three times, as I said. I didn't want her to think W. wasn't pulling his weight around here, so yesterday I made sure she understood that I was inside watching TV while W. worked. 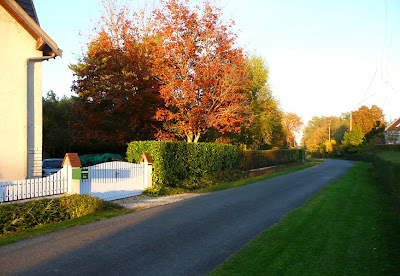 Our neat hedge along the rue de la Renaudière,
just outside Saint-Aignan
When the movie ended, I went out and cut up some more birch branches for about two hours, adding a lot more wood to the pile of kindling we can burn this winter or next. And then I took Callie for a walk.
Posted by Ken Broadhurst at 06:53