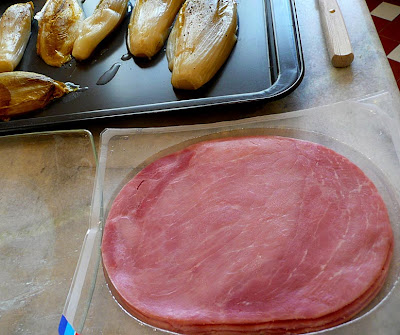 Cooked endives and sliced ham
While the endives are cooking in butter and lemon juice with garlic is the time to make the sauce béchamel you are going to cook them in. Bechamel is a sauce blanche, or white sauce, that is made with milk rather than water. What you do is melt a good-size chunk of butter (2 or 3 tablespoons) and when it is hot stir in the same amount of flour. 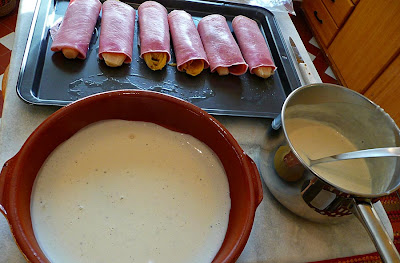 Cook the butter-flour mixture until you have a nice loose paste bubbling the bottom of the pot.Then start adding milk. Use whole milk, or even half-and-half. What I use here in France is skim milk plus about two tablespoons of crème fraîche for each cup of milk.

Anyway, add the liquid slowly, stirring it in completely each time. Keeping the mixture very thick in the beginning stages breaks down any lumps that might try to form. As you go, you can add liquid faster and the sauce will stay smooth. 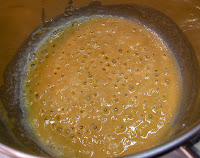 A butter and flour roux

Don't forget to add the cooking liquid from the endives to the sauce (there should be about ½ cup of it). You can also mash the cooked garlic cloves into a paste and add that too, for flavor. Salt and pepper the sauce and let it cook for a few minutes. Then add a handful of grated cheese. Save some cheese to sprinkle on top for the final cooking in a hot oven. 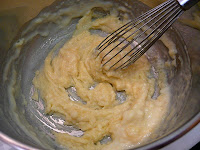 I normally use Comté, Gruyère, or Emmental, which are Alpine or Swiss cheeses you get here in France. A good thing to put in almost any dish that includes melted cheese or cheese sauce is a pinch or a grate of nutmeg. Just a pinch gives the cheese are really good flavor. A sauce béchamel with grated cheese melted in it is called a sauce mornay, by the way. 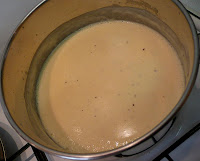 For the recipe in the pictures with this post, I used Cantal cheese, a cheddar-like cheese from the Auvergne area a few hours south of Saint-Aignan. I buy Cantal at Ed because I like it and the price is right. It's an A.O.C. cheese that's made in dairies, not by farmers. The Ed supermarket in Saint-Aignan always has it.

Yes, Ed, which stands for Epicerie discount, is what they call a hard-discount grocery chain in Europe. For staple grocery items, it is good. I also got the ham there, and the endives. And the milk, cream, and butter. Probably the flour. So this turns out to be an Ed special dish.

Ed's prices aren't always lower than SuperU's or Intermarché's, but they often are and there is no noticeable difference in the quality of the products. The Ed store in Saint-Aignan is clean and tidy and well lighted. Once we went to an Ed in a neighborhood of high-rise apartment buildings in Blois (in the Z.U.P., or Zone d'Urbanisation Prioritaire) and were surprised to see how grimy and "disheveled" the interior of the store seemed. The Ed store in Saint-Aignan must have good management and good employees. 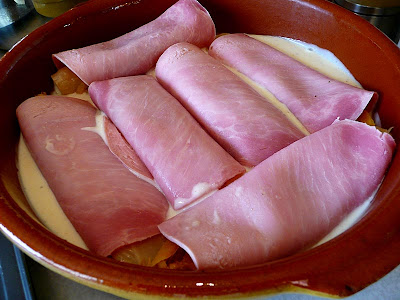 Arrange the endive rollups in a baking pan
with cheese sauce on the bottom.
Back to the recipe. Now that you have the endives cooked and rolled in ham slices, and the sauce made, you're nearly there. All you have to do is put a layer of sauce in the bottom of a baking dish that is large enough to contain all the ham rolls in a single layer and then arrange the rolled-up ham on top of the sauce. 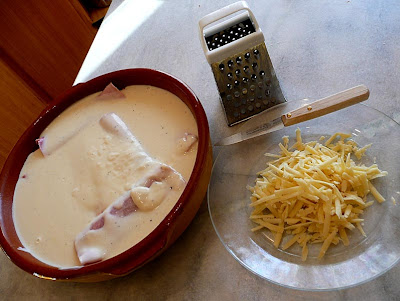 Grated Cantal cheese to strew over the top
Pour the rest of the sauce over the ham-endive rollups. You should have enough to cover everything nicely. If you don't have that much sauce, don't worry — you are going to sprinkle grated cheese over the whole thing anyway. Also, the sauce doesn't need to be very thick, so you can add more milk to thin it down if you need to. Then sprinkle cheese over the top (the same cheese or something like grated Parmesan, or a mixture). 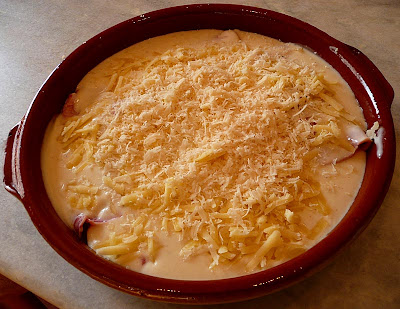 Grated Cantal and grated Parmesan make a good combination
Put the dish in a hot oven to melt and brown the cheese on top. Everything is cooked and hot so it won't take long. If you prepare it ahead and let it cool before the final cooking in the oven, don't put the oven on quite so hot so that everything will have time to heat through before the top gets too brown.
Voilà ! 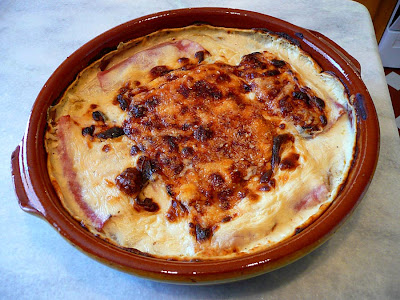 Gratin d'endives au jambon fresh out of the oven
Let the gratin cool a little before you try to eat it. Molten cheese sauce can really burn your mouth.
Posted by Ken Broadhurst at 07:37