How do you capture the soft, gentle landscapes of the Loire Valley — the Cher Valley, actually, around Saint-Aignan — in photos? It's like taking pictures of... nothing. But it's not nothing. It's an atmosphere, « un feeling », as we say in 21st-century French. 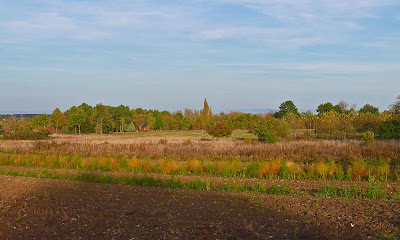 Fields and trees in the Cher Valley near Saint-Aignan
It's now autumn, so colors can be part of the interest of landscape photos. The Loire Valley colors are not the kind that knock your eyes out, though — with the exeption of the grape leaves. Even in winter, the local countryside is beautiful, as Walt noticed and pointed out when we first arrived here. "It's pretty country in winter," he said, "so you know it's going to be really nice in spring, summer, and fall." 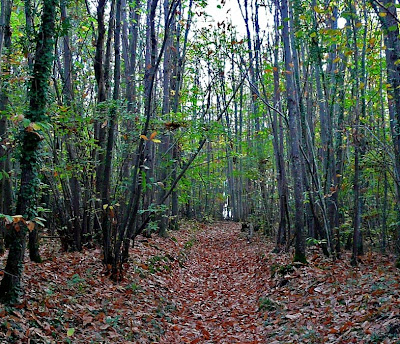 In Touraine, the woods are not dark
and threatening, but quiet and inviting.
I've been looking at Waverly Root's book The Food of France. Root, who died in 1982, was the Paris correspondent for the Chicago Tribune and then for the Washington Post. He had a food and restaurant column in the International Herald Tribune that I used to read when I lived in Paris in the 1970s and early 1980s. 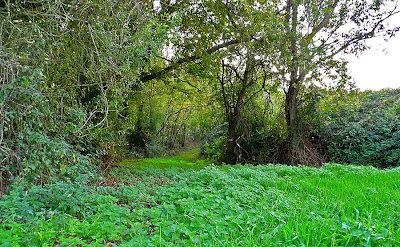 Even in fall and winter, big parts of
the Touraine landscape stay bright green.
Root writes that the Touraine, which is at the heart of what we call the Loire Valley and is centered on the city of Tours, is also the heartland of France. It is in Touraine that the French language developed and where, they say, "the best French" is spoken. People in Touraine aren't considered to have a regional accent the way people in Paris, Provence, Alsace, and the French Southwest do. 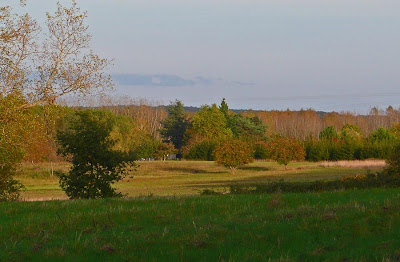 The tender, smiling Touraine countryside
Touraine also don't have a regional cuisine. Touraine food is purely French, and Touraine is the garden of France. It's a soft, gentle style of cooking that shuns strong flavors and depends on fresh produce. The only stinky cheeses in the Loire Valley are goat cheeses, and they are often eaten when they are fresh and mild. Garlic and onions have only a muted presence.

French food and the French language are obviously two of France's glories, and they help define what France is. Root writes that "when one considers the extent of the debt that France owes to the Touraine, it seems almost accidental that the land of France is not called Touraine" and "that the capital of France is not Tours." 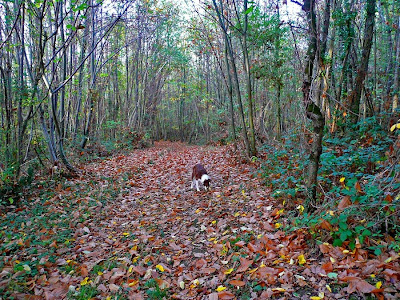 Dogs enjoy sniffing around in the local woods.
Saint-Aignan is on the far southeastern edge of Touraine.
He goes on to point out that France encompasses the sharp bare rocks of the Alps, the mountains that meet the sea "in a clash of hot colors" along the Mediterranean coast, the great chalk cliffs along the English Channel, and the rocky headlands of Brittany, pounded by heavy waves. But none of those are what you think of when you use the words "the French countryside."

Instead, you envision green fields, poplars lining long roads, agricultural country, "smiling and tender." The Touraine "is the epitome of this landscape," Root says. 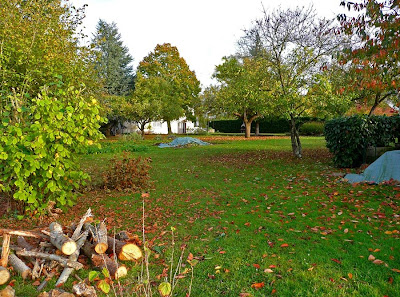 Soft and gentle even describes back yards around Saint-Aignan.
The tarps cover leaves and wood that we will burn in November.
I like that expression. "Tender and smiling." I wrote "soft and gentle." But Root's language is better. Tender and smiling are adjectives you could apply to the language, and food, and the landscapes of the Loire and Cher Valleys from Saumur to Tours to Saint-Aignan.
Posted by Ken Broadhurst at 07:30