Collard greens — not a rant, but a rave

All this thinking about collard greens got me to looking back at our 2005 vegetable garden. It was amazing. This year's garden has looked kind of sad in comparison.

The summer of 2005 was the nicest one we've had since we moved here in 2003. In 2003 it was too hot and dry. Summer '04 wasn't bad, but it turned very rainy and chilly in August. In 2005, the summer was steadily warm for three or even four months, with just enough rain and just enough hot days. The garden loved it. 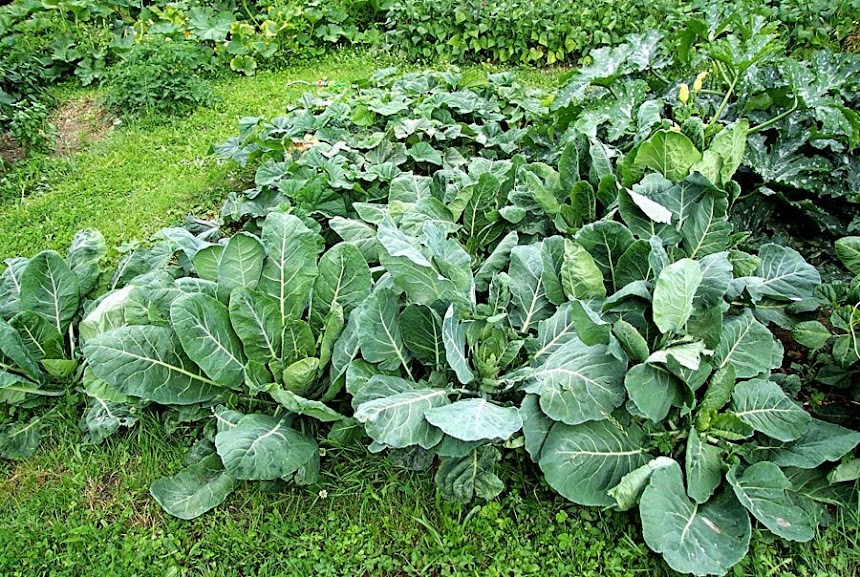 Collards in the garden near Saint-Aignan in 2005
One of my most successful crops that year was collard greens.

I guess collards are a cultural thing. If you are not a Southerner, you probably don't know much about them. Or about turnip greens or mustard greens. Maybe you've had kale, which is one leafy green vegetable I don't know anything about. And certainly spinach. In France, as leafy vegetables go, it's either spinach (épinards) or Swiss chard (blettes). Or cabbage. 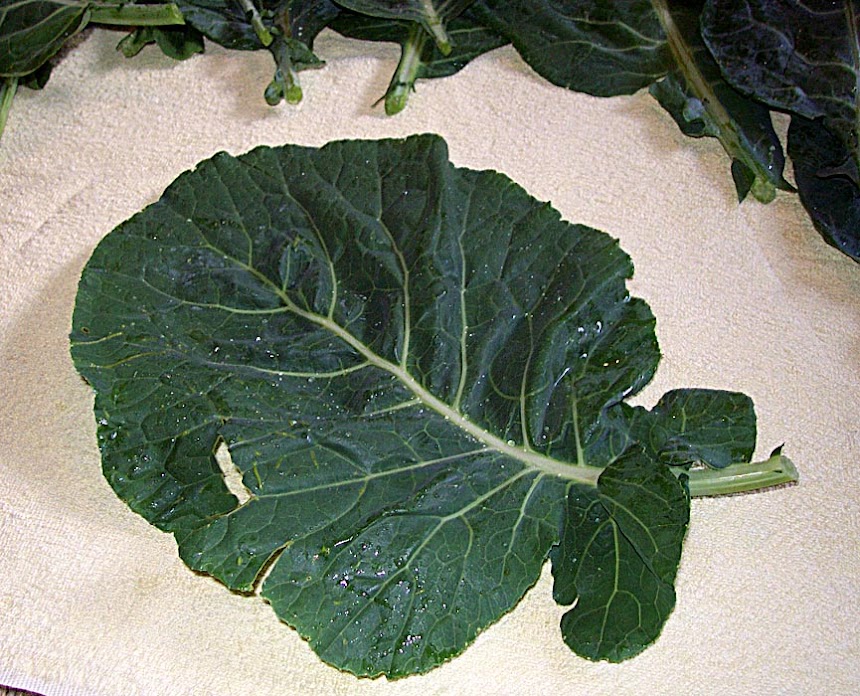 A nice "French" collard green leaf
I remember being happy when I moved to California more than 20 years ago to be able to find fresh collard greens at Safeway and in other grocery stores. It's probably because they grow well in the California climate and because a lot of Southerners, including a lot of African-Americans, moved out to California over the course of the 20th century.

The Southern style of cooking collard greens is to cook them for a long time. The leaves are tough when they're raw or undercooked. They aren't really digestible. After an hour or two of simmering in liquid, they become tender and tasty.

I remember a Martha Stewart radio spot on KCBS in San Francisco years ago where she said she was going to tell us how to cook collard greens. I listened eagerly, hoping to learn something. Martha said to cook the collard leaves in boiling water for five minutes! Well, at that point they are blanched but they are not ready to eat. The idea made me laugh. 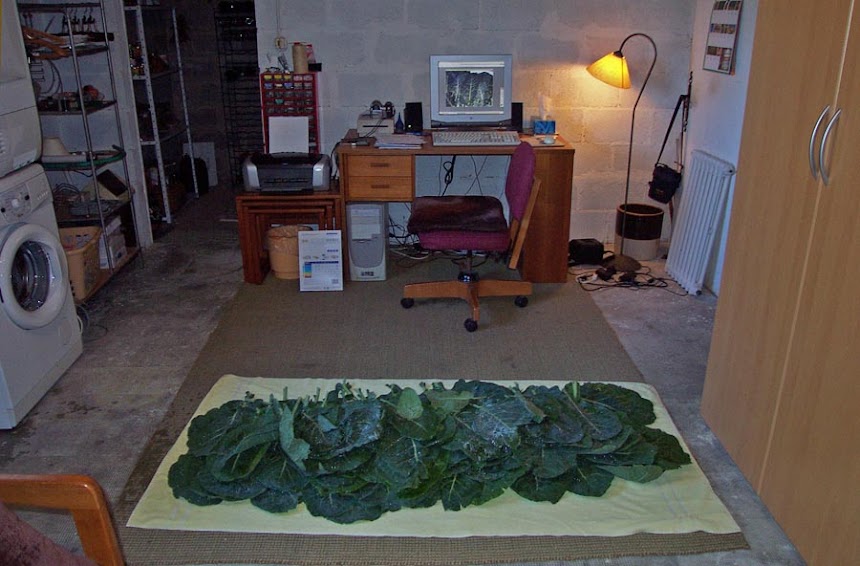 In early August 2005 we were painting the room where
I had my desk and computer. I moved into the utility room.
And I also brought in the collard crop in and washed the leaves
in the laundry sink, spreading them out on a big towel to dry.
My mother tells about a friend from our small town in North Carolina who went to Atlanta to visit her son. He took her to a fancy restaurant, and on the menu she saw pork chops with collard greens as a main course. She was pretty happy until the waiter brought her plate. It was a pork chop all right, and it was sitting on top of one collard leaf that had just barely been blanched. That was not exactly her idea of a fittin' meal.

Here's a recipe for cooking collard greens from my home town. The book is called The Promised Land Cookbook:

Wash and pick leaves thoroughly through several waters. Snap stalk of each leaf in 2 or 3 places. In large pot, render fat from strips of pork. Add wet leaves to hot fat. The steam will impart seasoning to greens and will wilt them quickly. Add water almost to cover; cook about 1 hour. Remove greens from liquid; chop fine. An empty snuff can is a great chopper. Reserve some of the liquid before returning greens to pot. Continue cooking until greens are tender. Add corn meal dumplings. Do not add cooking oil.
— Annie Willis
The corn meal dumplings are optional. So is the "empty snuff can." You can probably use a knife to chop the cooked collards. And notice the instruction to "continue cooking until greens are tender." That can take all day, depending on how you like them.

In 2005, I grew two varieties of collards. One had very
green leaves, and the other had bluish leaves. Both were good.
By the way, did I tell you I found some organic corn meal at the supermarché in Saint-Aignan the other day? It's produced here in the Loire Valley. I was happy.

When I was a kid, there were four or five little corner grocery stores still in business in different neighborhoods around our town (pop. 4,000). They're all long gone now, of course. One of them was just two or three blocks down the street from our house and was run by a local character named Kilby or "Kib" Guthrie. It was in an old wooden building that was listing heavily to the eastward, as we would say. We kids loved to tease and irritate Mr. Kib. We would call him on the phone.

"Mr. Kib, do you have any fresh collard greens today?" we would ask. It was like asking him if his refrigerator was running.

"Why yes, I do," he would answer. "I've got the prettiest mess of greens that somebody grew in his back yard down here in the Promise Land." That's what the neighborhood was and is reallye called — the "promise land," not the "promised land."

"Oh good," we'd say, "but Mr. Kib, have these collards got bones in'em?" We could hardly contain our laughter. We hadn't had phones in our houses for all that long and this was great fun.

"Would you boys get off the telephone and stop wasting my time," Mr. Kib would sputter. And we would laugh like idiots. 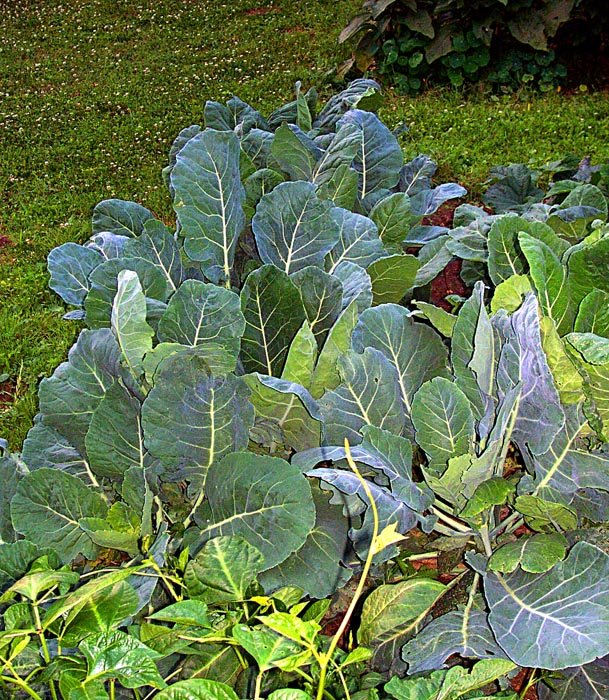 Those 2005 greens at La Renaudière
When a big hurricane or a strong nor'easter storm would move up the coast, one way people would describe the storm surge was: "The tide came up so high that the hog fish were eatin' the collard greens." Just last week I saw a report on a storm that brought coastal flooding to N.C. There was a picture of a local woman whose yard and garden were under water. How high was the storm tide, she was asked. "Well, I could just barely see the tops of my collard greens," she answered. 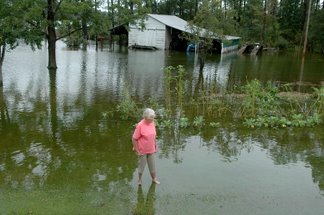 "Minnie Pittman of Merrimon wades through her flooded yard
Thursday to check her collards, which are nearly submerged."
(Actual caption from newspaper.)
When I worked at Apple (Claris), one of the writers in my group was a woman who had grown up in southern Georgia. Her father was African-American and her mother was Filipino. Her mother came to visit her in California one year. She came to the office with her daughter. The woman from Georgia had brought me a couple of Ziploc bags full of the most beautiful collard leaves, frozen, as a present. That's how Southerners feel about collard greens.

At another company in the early 1990s, I received a package from the mail room one day. It was a medium-sized cardboard box, very heavy, that my mother had sent. Several of my co-workers gathered around to watch me open it. They were curious about what the contents might be. Well, it was four quart jars of collard greens that my mother had grown in her garden and canned herself. And they were delicious. They were probably the most expensive collards I've ever eaten, given what it cost to ship them.

In the South, they cook collard greens in water with a chunk of salt pork or streak o'lean in the pot. That can be very good, and we have great side meat (called lard or poitrine de porc — pork breast — here in France.

As an alternative, I like to poach collard greens in chicken, duck, or vegetable broth. Along with the broth, add a little bit of duck fat or lard to give the cooked leaves a nice sheen and really good flavor. 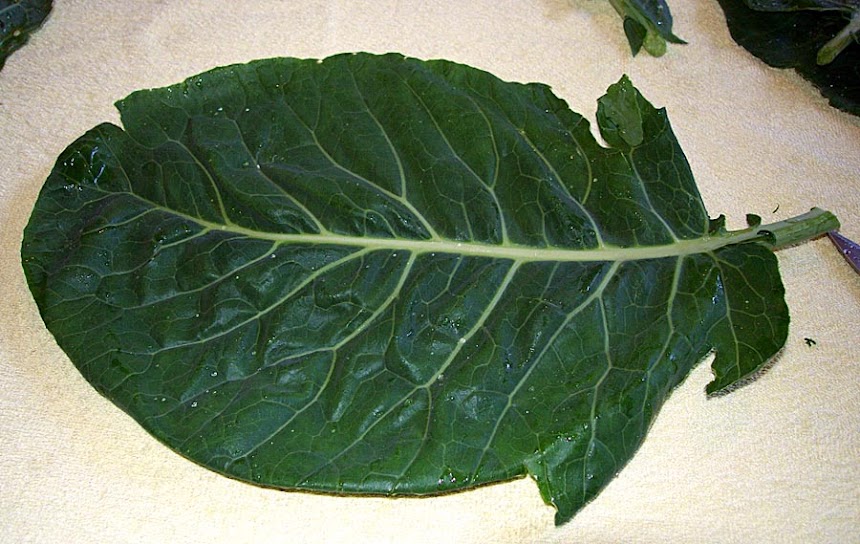 Another nice collard green leaf from 2005
If your collard green plants haven't yet been touched by frost as they grew in the garden, you can add a little bit of sugar to their cooking broth. That can be good, but don't put in much — just a pinch. Or don't use sugar at all — use some white wine. That's very French, of course. I've also been known to put in a tablespoonful of apple juice instead of sugar.

Collard greens originated in the lands around the Mediterranean Sea, apparently. Or in Africa, farther south. They are a popular food in Portugal, I've been told, along with broccoli rabe. In 2005, our friend Gisèle called my collards le chou perpétuel — "the perpetual cabbage" — when she saw the plants and was surprised that they weren't forming a tight head like cabbage. I told her they weren't supposed to, that the leaves stay loose. I did some reading and found out that collards or "perpetual cabbage" are the most primitive form of cabbage. It was what people ate before the plant was "improved" into varieties like cabbage, broccoli, Brussels sprouts, and cauliflower.

Sometimes, as with salmon, the wild variety is just tastier than the farm-raised kind.
Posted by Ken Broadhurst at 07:45