Many times when Americans write about their dining experiences in France, they say that they have enjoyed eating escargot, in the singular. That makes me laugh. Who could eat just one? What you are served in France and in French is plural — des escargots. Sometimes six, sometimes a dozen.

Why did the escargot become a prized food item in France? One theory I've read is that people in Burgundy started eating snails because of the old Catholic tradition of meatless Fridays. Living far from the ocean, the Burgundians resorted to eating a cold-blooded land animal rather than fish, which were scarce. The main point was that you weren't supposed to eat the flesh of warm-blooded animals on Friday. Snails were also a meat that Catholics could eat during Lent. 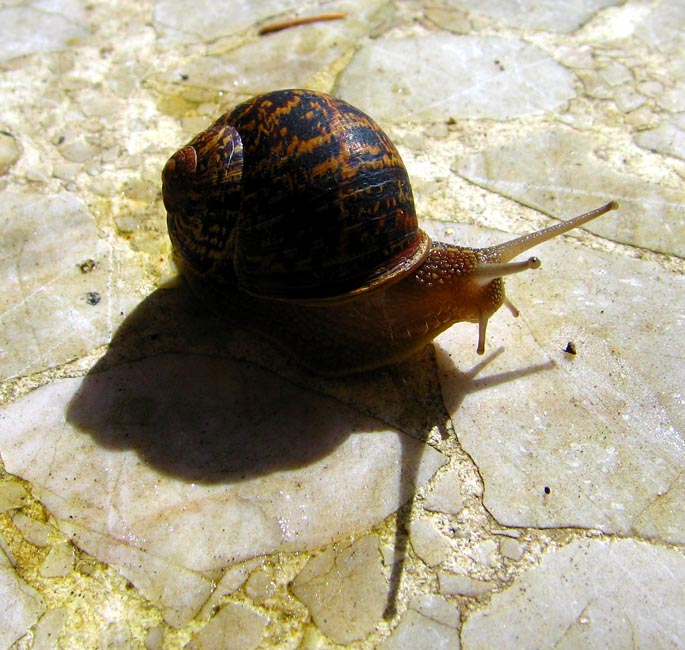 I found this escargot in the garden the other day. Snails are
plentiful this year. I assume it's because of our damp weather.

Somebody must have liked the taste of snails, because they caught on. Of course, most of what you taste when you eat escargots is what is called "snail butter" — beurre d'escargots. It's the very garlicky butter with lots of chopped parsley that snails are normally cooked in and served with.

The varieties of snails commonly consumed in France, out of the hundreds that exist, are called l'escargot de Bourgogne (or le Bourgogne —  the Burgundy snail) and le petit-gris (the small gray snail). It seems that the Burgundy snail was never particularly Burgundian, but lived over a much wider territory. It's also called the escargot des vignes — the vineyard snail.

Most of the snails consumed in France nowadays are imported from Eastern Europe, Turkey, or Indonesia. The French snail population was decimated by over-gathering, says the food writer Jean-Pierre Coffe in his 1989 book called Le Vrai Vivre, which I translate as Living the True Life. There were only about 150 snail farmers in France by the late '80s, Coffe says, producing about 100 tons a year, while the French were consuming about 10,000 tons of escargots annually. 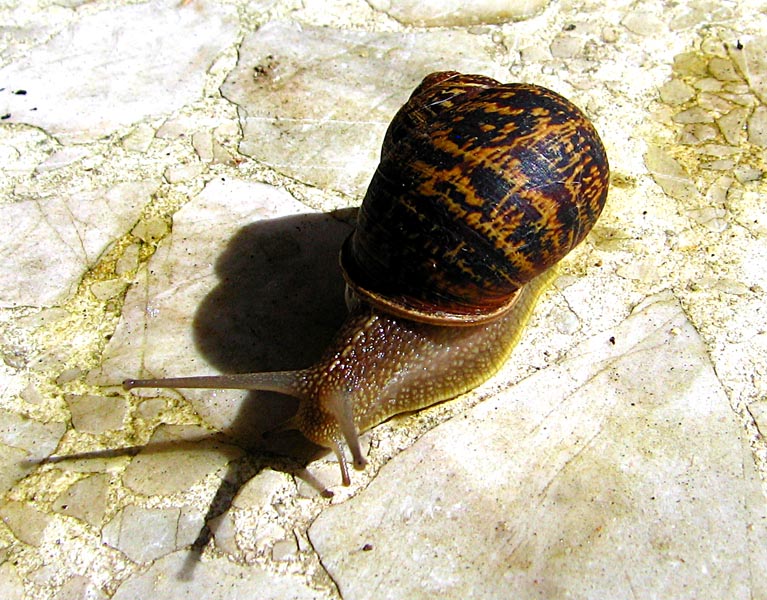 The snail was very cooperative about posing for my pictures.
I really didn't have to use a fast shutter speed!

Snails gathered in the wild need to be purged before they are fit for human consumption, I understand. Why? It's because in nature snails eat plants that are toxic or even poisonous to human beings. Purging them means feeding them a controlled diet (or not feeding them at all) for a few days to allow the toxic plant matter to pass on through their systems. Then they are good to eat — though not everybody would agree with that assessment, I'm sure.

Monsieur Coffe also says that prehistoric peoples as well as the ancient Greeks and Romans ate snails, blowing the meatless Friday explanation out of the water. He says entire peoples have been saved from famine by the lowly escargot. Recipes for fried snails date back as far as the 4th century of our era, and for many centuries snails were a food eaten mainly by the rich, Monsieur Coffe adds. The tradition of eating snails with garlic butter goes back only to about 1840. 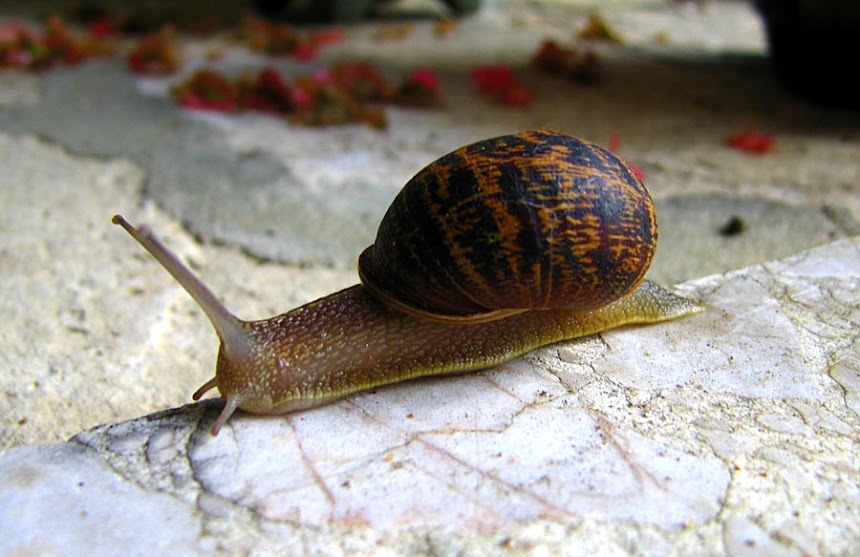 I couldn't tell you what variety of snail it is. (2016 note: it's called le petit-gris.)
It looks nice and plump, though, doesn't it?