From bad to worse, weatherwise

It's a good thing that I got out Tuesday afternoon for a nice walk in the vineyard with the dog and the camera. It started raining again Tuesday night and it was still raining yesterday (Wednesday) afternoon. Here it is Thursday morning, and... well, whadda ya know... it's raining. 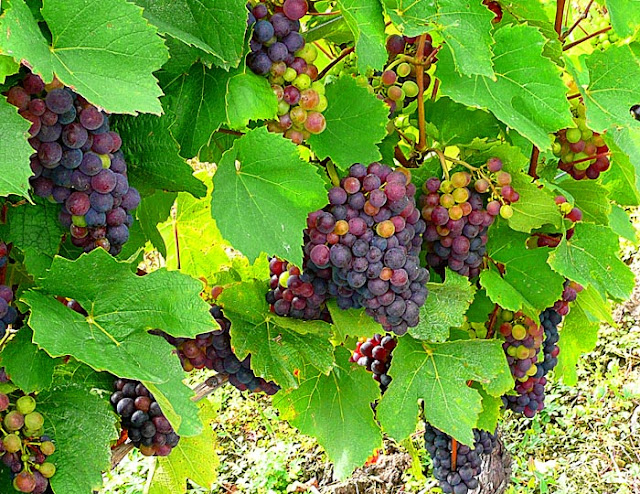 Callie had a very rainy birthday. In the morning, she and I headed out down the gravel road through the vineyard for our normal walk, but in a light drizzle. By the time we had gotten about a quarter of the way out (it's about a mile out to the end of the road), the rain really started coming down. So we had to turn back. The poor dog was antsy and a pain in the butt all morning, because she had so much pent-up energy. 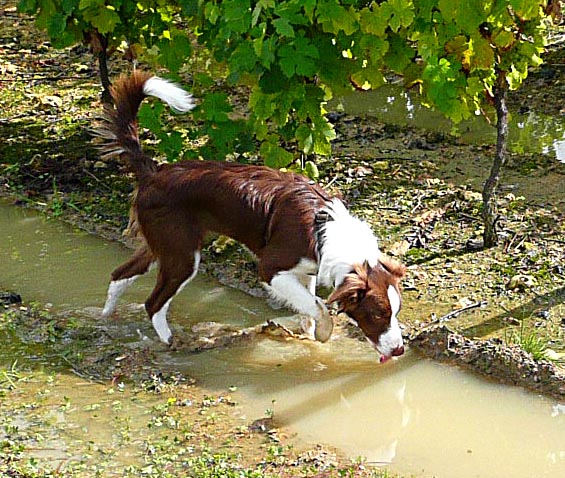 I had to fire up the Peugeot and go out yesterday morning. I had an appointment with our insurance agent, Mme Janvier, and I needed to go to the Ed supermarket to pick up some supplies. I spent a good 30 minutes talking to Mme Janvier.

One of the things we talked about was the weather, of course. Her office windows overlook the Cher down near the bridge in Saint-Aignan, and I could see the rain falling and speckling the surface of the river. « Les gens vont vraiment déprîmer cet hiver, parce qu'ils n'auront pas beaucoup vu le soleil cet été », Mme Janvier said. People are going to get really depressed this winter because they won't have had their time in the sun this summer. I'm sure she's right. Just thinking about winter is depressing at this point. 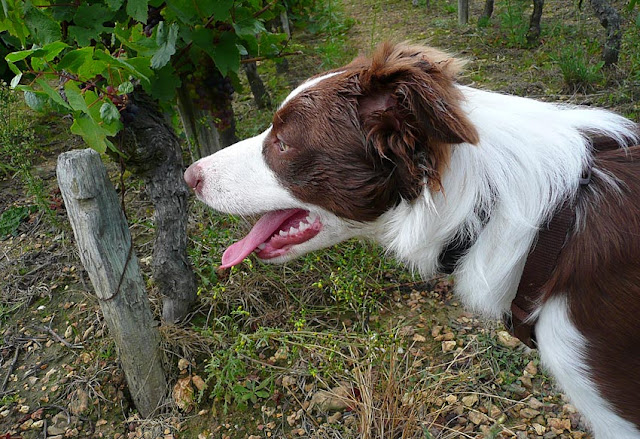 The French national news has been carrying big stories about the depressing weather and about the vacationers and tourist industry people who are having to suffer through this été pourri — rotten summer. Campers who went out to the coast in Brittany and farther down toward Bordeaux have been pulling up stakes early and heading back home. Sidewalk cafés near the beaches are just a collection of empty tables and chairs. Nobody is buying ice cream.

The movie theaters are full of people, evidently. And the people most enjoying this ducky summer are the ones in Paris and other big towns who sell... umbrellas. Parapluies. Pépins. Pébrocs. Foreign tourists interviewed for the French news shows swear they are still having a great time in Paris and that it is beautiful despite the rain. Since they've probably never been there before, they don't really know what they are talking about! If they could only see it when the sun's out! 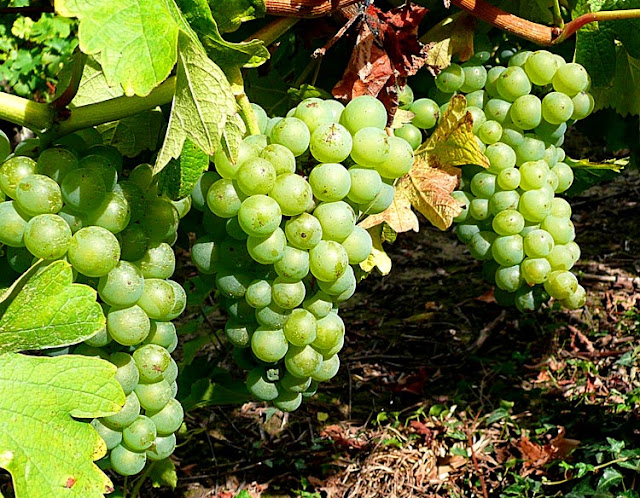 Yesterday Bruno of the Domaine de la Renaudie winery was out on his tractor spraying the grapes again. He's the one who told me last week that it was a good thing, on the day I saw him, that it wasn't raining. It was just gray and gloomy that day, and the last thing the grapes needed was more moisture. Tough luck, really, because these days, it's very wet and just as gloomy.

I assume Bruno was spraying the grapes with what is called the Bordeaux mixture (la bouillie Bordelaise), a fungicide/bactericide that is used to control rot. It's a combination of copper sulfate and hydrated lime, evidently, and you can see it as a blue powder on the ground and the grape leaves much of the season — except when the rain has washed it all away. 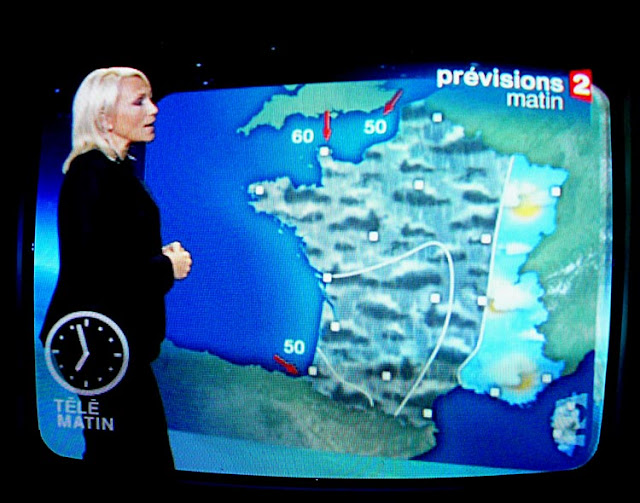 For him to be out there spraying in the rain, Bruno must be desperately trying to save as much of his grape crop as possible. In Champagne, Beaujolais, and Alsace the harvest has already started. They are saying that the exceptionally warm weather we had last April gave the grapes a head start on the season, so they are ripe early this year. They are probably also trying to get them in before the rain ruins them completely.

Harvest dates are set by the AOC people. In other words, to get the Appellation Touraine, which is a guarantee of authenticity and quality, the grape-growers can't harvest until the "experts" give them the go-ahead. Bruno told me the vendanges wouldn't start before September 1 this year. Let's hope there's something left to harvest. 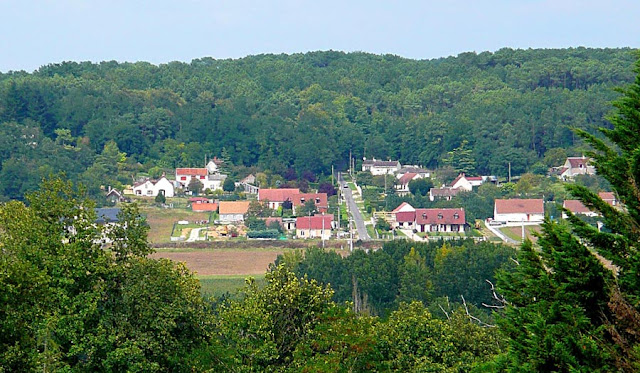 Another news report said that even the tomatoes grown in hot houses are not doing well this summer. There isn't enough sun to warm things up, and the humidity penetrates everything. Lettuce, of all things, is doing poorly. Farmers are finding pests and diseases on the leaves that haven't been seen in years. Carrots are rotting in the ground.

Meanwhile, there are having their third severe heat wave of the summer in Greece, according to the news on France 2 TV. Temperatures there are over 100ºF (approaching 40ºC) these days. I think the same is true in the U.S. Southeast. Evelyn, our friend in Alabama, says in an e-mail that she was out yesterday and after having lunch with friends "the temp in my car read 114, yikes. Everyone is talking about the weather. It sucks the energy right out of you, a bit like yours which sucks your good spirit out I think." Evelyn is right about our weather, so I know she's right about hers.

Susan says in a comment that her garden in the Oakland Hills, San Francisco Bay Area, is a disaster zone like ours. "Our summer here in Oakland is pretty similar to Bellingham's," Susan wrote. "All but one of my tomatoes failed to set fruit, the pepper plant has exactly one pepper, and the cucumbers simply up and died." Susan, I didn't realize you were having that kind of summer there. Others have told me that the weather in the Seattle area (including Bellingham) has been dismal this summer too, but that's less surprising that hearing about yours (apologies, Seattle).

Clouds moving back over us on an August afternoon

Finally, Claude (who blogs at Blogging in Paris and in French at Vieux c'est mieux) is out in Normandy, about a three-hour drive north of Saint-Aignan, near the coast. Up there on the English Channel, she reported the other day, she has turned her heat on, or at least the radiator in her living room. It's that bad. The temperature in our house is holding at about 66ºF, and yesterday I kind of wanted to have a fire in the woodstove. Instead, I wrapped up in a blanket and took a nap in front of the TV.