The garden has decided to start producing cucumbers. Those and zucchinis, plus a few handfuls of green beans, are all we are getting so far. The weather has improved, however, and where there's sunshine there's hope.

What do you do with a half-dozen big cucumbers? A couple of years ago, when the weather was hot and summery, we ate a lot of cold cucumber soup that we made with yogurt and herbs. That was delicious. Another year, we made cucumber pickles — spears, 13 jars of them. We are slowly using those up. They are strong and vinegary, so they are better chopped and used in tartare sauce or tuna or chicken salad than just eaten whole. 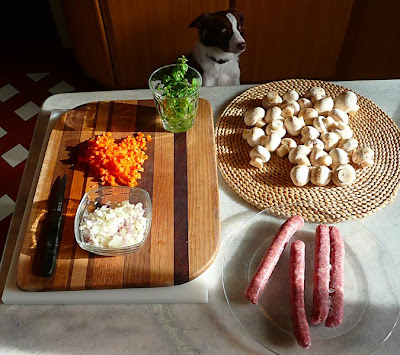 Getting ingredients ready to make stuffed cucumbers.
Callie is a good supervisor.
A couple of days ago I was reading an old cookbook called French Country Cooking for Americans (1946) by a Frenchman named Louis Diat. He described the house where he grew up down in the Bourbonnais region, which is where Callie was born — especially the kitchen, his mother's cooking techniques, and the way they ate food available seasonally and never wasted anything.

One of the recipes he gives in his book is Stuffed Cucumbers. I don't think I'd ever eaten stuffed, cooked cucumbers before, or even heard of preparing cucumbers this way. I'd had cucumbers cut into slices and panned in butter, served alongside fish, but that was it for cooked cucumbers. 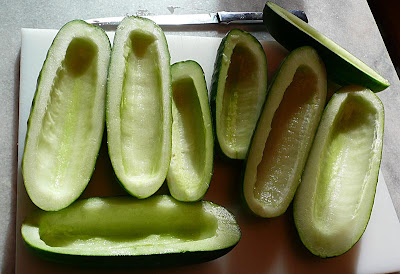 Raw cucumbers hollowed out and ready for blanching
Monsieur Diat says to parboil (nowadays we use the term "blanch") cucumber halves or pieces for 8 to 10 minutes in boiling water, and then stuff them with either mushroom duxelles or chopped leftover meat or fish and rice, or a combination of the two. Duxelles means very finely chopped mushrooms cooked with onions and herbs. 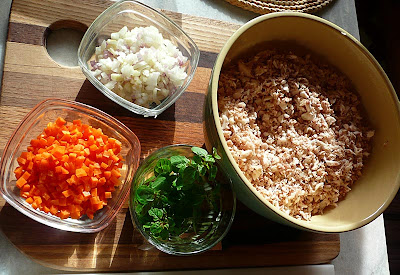 Carrots, onions, and mushrooms finely chopped for duxelles
It just so happened that Walt had bought a pound of champignons de Paris from the mushroom lady at the farmers' market in Saint-Aignan on Saturday. We had onions, shallots, and garlic, and there are a lot of herbs in the garden — parsley, sage, oregano, thyme, and bay leaves. 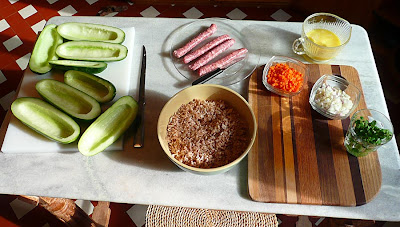 Panoramic shot of all the ingredients — in the
measuring cup is clarified butter used for sautéing
To make stuffed cucumbers into a meal, I wanted to put some meat in the stuffing, but I couldn't think of any leftover meat we might have in the fridge or freezer. I thought about cooking a chicken leg and cutting that up. Then I remembered that I had four of the little pork sausages called chipolatas in the freezer. Those would be quick to thaw and would add good flavor to the mushroom stuffing. Chipos [shee-poh], as they are called, are a standard item in France, sort of like American breakfast sausages. 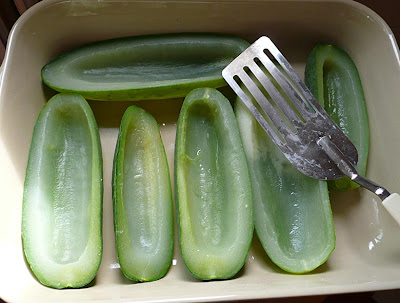 Blanched cucumber halves
So I turned on the radio and spent the morning in the kitchen listening to France Inter (you can hear it here) and cooking. It's one of my favorite things to do. I chopped a small onion, a shallot, and a big clove of garlic. I remembered there were some carrots in the fridge, so I chopped one of those very finely. I trimmed, brushed, and washed the mushrooms and then I removed the casings from the sausages and chopped the sausage meat very finely with a big knife. 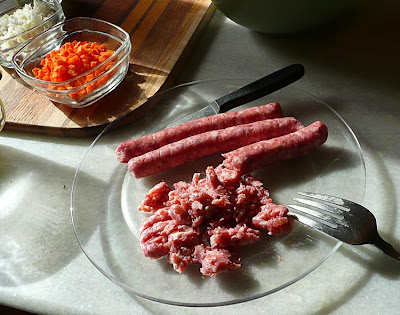 Remove the casings from the sausages
and then chop the meat finely if necessary
To chop the mushrooms, I used the food processor. I put half of them at a time into the processor bowl and pulsed the blade until the mushrooms were reduced to a fine crumb. Then I went out and picked some herbs, which I washed to prepare them for chopping.

It was easy to cut the cucumbers in half and remove the seeds with a spoon, making them into boats (or barquettes, in French). I was afraid that parboiling them for 10 minutes might reduce them to mush, but it didn't. The boats held their shape and the cucumber flesh turned a translucent light green color. 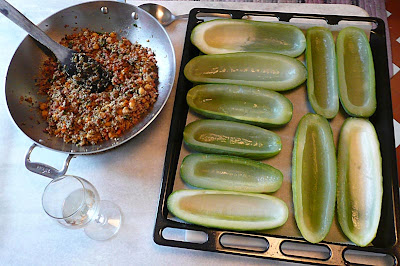 Getting ready to stuff the cucumber halves
I cooked the stuffing in a pan on the stove — the onion and carrot mixture first, then adding the chopped mushrooms. I waited for all the water released by the mushrooms to boil away. Out in the garden, I had noticed that some mustard greens we planted earlier in the summer had bolted but had nice bright green leaves on them, so I had picked some of those. I chopped them finely and added them to cook with the other stuffing ingredients in the pan. 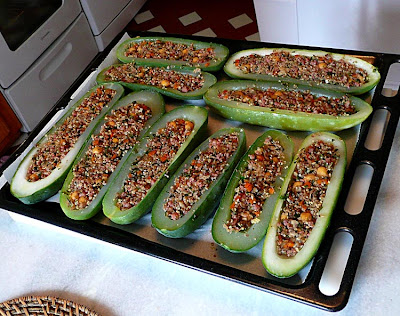 Stuffed cucumbers ready for the oven. You can
see the chickpeas and couscous in the stuffing.
Then I took that vegetable mixture out of the pan and cooked the finely chopped sausage meat separately. It didn't make much fat, so when it was done I just put the mushroom mixture back in the pan and mixed it up thoroughly. Meanwhile, I had noticed a bowl of leftover couscous grain with chickpeas mixed into it just sitting in the refrigerator. I decided to add that to the stuffing too. You could add cooked rice, or breadcrumbs. I stirred in the chopped herbs at this point too.

So that was it. I stuffed the blanched cucumber halves and put them on a pan in the oven at low temperature, covered with parchment paper to keep them from drying out too much, for about 35 minutes. One recipe I found on the Internet said you could keep the parboiled cucumbers in a hot oven, covered, while you made the stuffing, and then when the stuffing was cooked you could just take the cucumbers out, spoon in the stuffing, and serve them. That would work too. 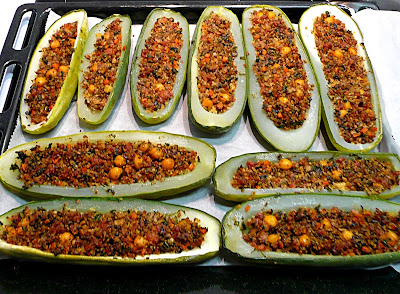 Cooked and ready to eat. Surprisingly good.
The cucumber boats held their shape through all that cooking. The finished product had sort of the texture of a good cucumber pickle — firm and not flabby, with just the slightest crunch — but without the vinegary pickle taste, of course. The stuffing of sausage meat, mushrooms, couscous, herbs, onion, shallot, garlic, and carrot was a good complement in taste and texture. After lunch, the leftovers got wrapped in foil and then put in the freezer in ziploc bags.
Posted by Ken Broadhurst at 07:47