The early bird gets the worm. In French they say that the future belongs to those who get up early — l'avenir appartient à ceux qui se lèvent tôt. Didn't Benjamin Franklin say something about that?

In this case, the early birds get the nice sunrise. And they weren't even that early this morning. Callie started trying to wake me up at about 5:00 a.m. She comes over and licks me on the ear or on the hand or on the elbow. Sometimes that works. If I'm not careful, she sticks her tongue in my mouth. Then I jump up sputtering and grumping. 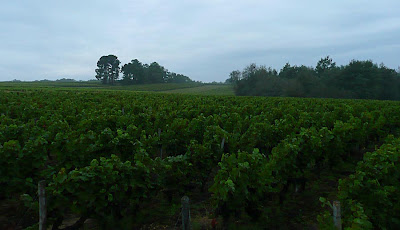 Walking out into the vineyard at 7:00 a.m., looking west.
Another gloomy morning, I was thinking to myself.
I fended Callie off until almost 7:00 this morning. She wasn't too persistent, actually. She waited quietly most of that time, dozing like me. It was still pretty dark at that hour. The thick layer of low gray clouds and the morning haze hugging the ground didn't help brighten things up any.

I put on my rubber gardening shoes because everything is so wet and muddy. I've never seen the vineyard so wet, with so much standing water everywhere, not even in January.We were walking toward the west, away from the house. Then I realized the light had changed. I turned around and looked behind me. 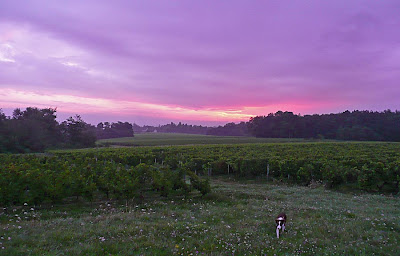 I turned around and saw the sun coming up behind me,
over the vines. Callie was following along.
A break in the clouds on the eastern horizon was letting pink sunlight shine through to brighten the sky. I stood and watched for a minute or two. It was amazing. 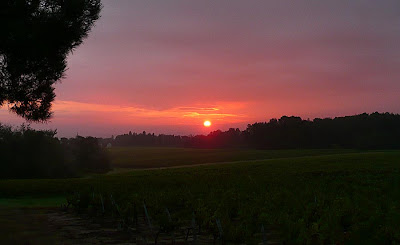 A few seconds later the clouds really let the sun shine through.
I hadn't bothered to put on my glasses, so I couldn't see the screen well enough to know whether the camera was going to be able to catch the event. Fortunately, however, I had grabbed the camera and put it in my shirt pocket as I left the house. It's a habit. 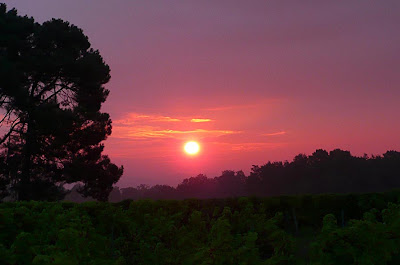 The camera even captured the scene when I zoomed in on it.
Even with the lousy weather we've been having, it is a real treat to live here and have the vineyards out back as our stomping grounds. By the way, I emptied another 14 mm of water out of the rain gauge this morning. That brings us up to 67 mm for the month of August so far. And that's more than 2½ inches.

Since January 1, we have had 440 mm of rain at La Renaudière, or over 17 inches. I think the average annual rainfall here is about 25 inches, so we are probably within the norm. I got used to not having rain in the summer after spending nearly 20 years in the San Francisco Bay Area, and for the first four summers we spent here were also pretty dry. San Francisco gets about 20 inches of rain in an average year, nearly all of it between October and April. 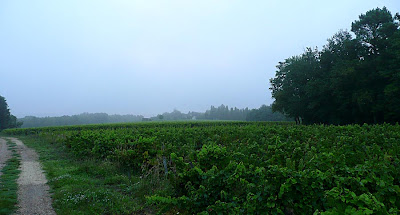 As I walked back toward the house a few minutes later,
the clouds had closed back up and it was gray and damp again.
But the fact is that last August in Saint-Aignan we had two inches of rain, compared to this year's 2½ inches so far, and I remember the news reports saying we were having the wettest August in 50 or 60 years. But it's all relative. Where I grew up, on the coast of North Carolina, the average annual rainfall is about 60 inches. So the 25 inches of rain we get annually in Saint-Aignan is comparatively low. And the average rainfall in August on the N.C. coast is not 2½ inches — it's 7½!

Anyway, the orange slugs are really having a banner year around Saint-Aignan. I'm seeing them all over the vineyard, in places where I've never noticed them before. In past years they were only visible in the shadiest, dampest parts of the woods. Now they are getting closer and closer to our house and garden. 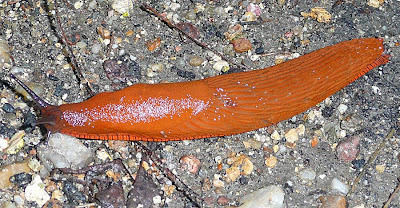 An orange slug I saw this morning, near the house, was
about four inches long. I had to use the flash to get this picture.
These impressive slugs might actually find our garden before long. There's not a lot out there for them to eat, by the way. Well, that's not really true. Walt just brought in half a dozen cucumbers and two oversize zucchinis.
Posted by Ken Broadhurst at 07:56