A butterfly, a snail, and an invasion of toads

Out on my walk with the dog yesterday afternoon, I spotted a butterfly at the edge of the woods that surround the vineyard. 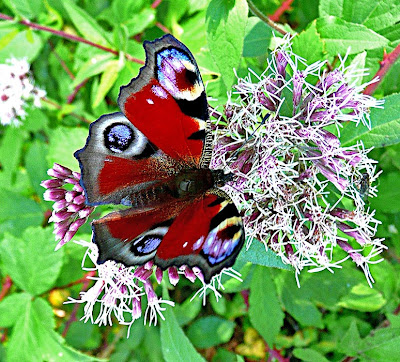 A Saturday afternoon butterfly
I put my camera in macro mode and try to get as close as I could without making the butterfly fly away. I got three pictures, the best one being the one posted here, before it took off and disappeared.

We are having an invasion of toads! That sounds worse than it really is. We probably wouldn't even have noticed them if Callie hadn't. Yesterday morning and again today I let her out early so she can take care of business. I'm waiting for the sun to come up before we leave for our walk. 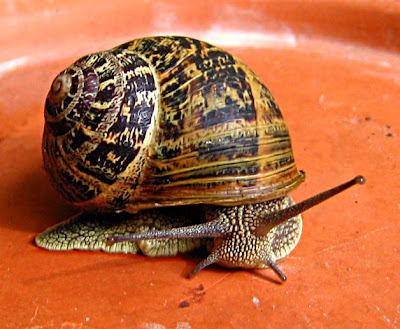 Here's another snail. They are pretty easy to photograph
since they don't fly away or even run very fast.
Right now she's over in the side yard trying to catch a toad that she has detected hiding in the base of a rose bush near a clothesline post. She hadn't caught it yet at last report.

Last night I let her out to pee at about 10:30, and she found two toads on the gravel path that runs through the back garden. I put on a glove and picked the first one up and put it out in the ditch by the road, thinking it might be happy there and the dog would be able to calm down. Not two minutes later, after I had taken the glove off, Callie found another toad, on the other side of the path, hiding in some dead leaves. I got a flashlight and sure enough, there it was. I let that one be. 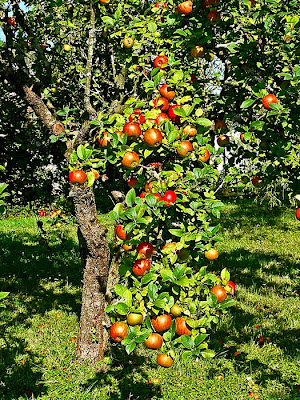 Another branch loaded with beautiful apples
Breaking news: I just went back outside and Callie had managed to chase the toad out into the open. She was pouncing around it and the toad was spitting at her as it tried to save itself. I put that gardening glove back on, picked the thing up, carried it across the yard, and let it go outside the fence, in the the woods on the north side of the house. Sorry, no picture (I can feel the disappointment in you as you read this) because it's still too dark. 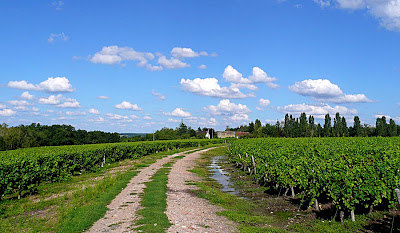 Yesterday's nice weather at La Renaudière
P.S. I just got back from my walk with the dog. Yesterday morning, when Walt took her out, she managed to roll in something pretty rank-smelling. Walt gave her a bath in the downstairs shower. Well damned if she didn't roll in the same thing when she was out with me today. I should have known she would find it again. So back in the shower it was for another bath a minute ago. At least she doesn't mind taking a bath, even if she treats the toweling off afterwards as a particularly amusing game and manages to get the bather and the whole room wet.
Posted by Ken Broadhurst at 07:55