Our Thanksgiving weekend cooking spree has come to an end. ("Spree" is a funny word — it means "a period or outburst of extreme activity" according to one dictionary.) Anyway, la fête à la cuisine lasted five days. Pumpkin pie, roast leg of lamb, slow-cooked duck legs, broccoli and potatoes with home-made mayonnaise, corn muffins, lamb curry, and "pulled duck" barbecue were some of the results. It's what we do when lousy winter weather settles over the region.(According to Accuweather, be got nearly 160 millimeters of rain in November (about six inches, three times the average). 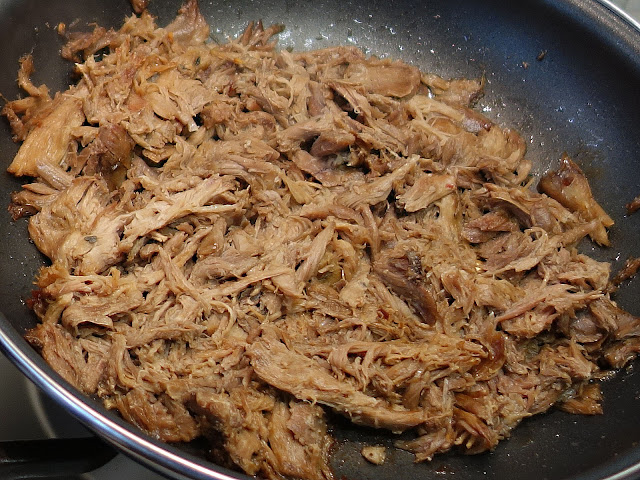 Here's what pulled duck (on the pulled pork model) looks like. Pulled meats are a North Carolina specialty, and in a way they are like French rillettes (potted pork) but with less grease and more spice. You eat pulled pork, turkey, or duck hot, on your plate or on a petit pain (a bun, as in "hamburger bun") as a sandwich. In France, rillettes are spread cold on French bread — a slice of baguette or pain de campagne, toasted or not.
The sauce you add as the seasoning for pulled meats, at least in eastern North Carolina, is a vinegar & hot pepper concoction. Don't get the idea that the meat ends up tasting pickled — you don't put that much on. Other concoctions based on vinegar are mayonnaise, mustard, ketchup, and of course vinaigrette. Those sauces don't taste "pickled" any more than pulled meat à la carolinienne does. The pulled meats do taste spicy, however, and they are not served dry but slightly moistened and tender. 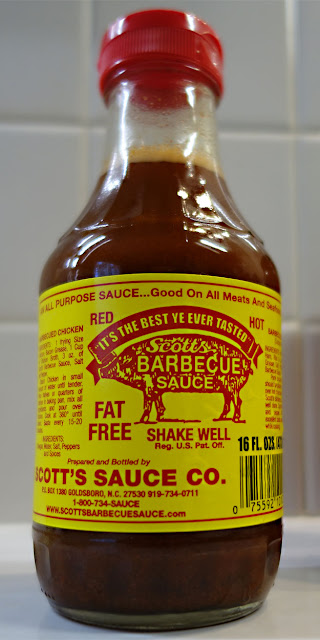 To make our pulled duck barbecue, I put chunks of slow-cooked duck in a frying pan and sprinkled on some Scott's BBQ sauce. I mashed the lumps of meat with a wooden spatula so that they would end up shredded into strands — falling apart — and brown slightly. That way, the sauce and spicy heat spread all through the meat. The ingredients in Scott's BBQ sauce are "vinegar, water, salt, peppers, and spices" — it's a patented mixture invented by a man named Adam Scott between 1917 and 1920 in Goldsboro, North Carolina, as a seasoning for pit-cooked pork.

The late Mr. Scott's BBQ restaurant closed down some years ago, but the sauce is still made by his descendants and sold on-line in in many North Carolina supermarkets. I bring it back from my trips to N.C. That said, it's not hard to reproduce. Notice that it contains both vinegar and water. You don't want it to be too acidic. And you don't put sugar in it, as you do to make most other American BBQ sauces. (In western North Carolina, people make a BBQ sauce with ketchup, or sometimes tomato paste, in it. It's sweet and not to the eastern half of the state's taste. In South Carolina, they put sweet mustard in their barbecue sauce.) 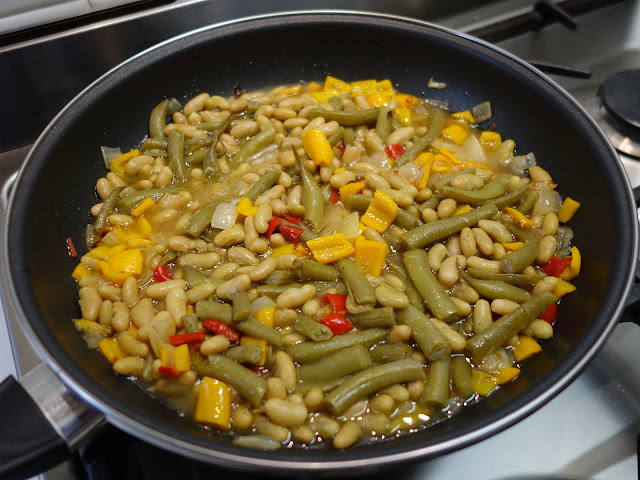 We ate our pulled pork with some of the beans we had cooked and seasoned to have with our roast leg of lamb. I added two things to the beans — some duck fat and some peppers (sweet yellow and hot red). The beans were French flageolets and some of our garden-grown haricots verts, and they were also good with some of Adam Scott's BBQ sauce sprinkled on them. This is not fancy food, but it is full of flavor.
Posted by Ken Broadhurst at 07:30