One thing at a time

Le vol. The flight. The plane was only about half full. I don't think the non-stop Paris-to-Raleigh-Durham run will last much longer at this rate. I should have said that the other way around: RDU-to-CDG. The flight over to RDU was pretty much full on February 2. The flight back from RDU to Paris was under-booked yesterday, as it was last October when I came back from N.C.

But a very pleasant flight it was. The plane lifted off at about 6 p.m. EST and the pilot came on the intercom to announce that total flight time would be only 6 hours and 50 minutes — much shorter than the scheduled 8 hours and 10 minutes. We must have had one hell of a tailwind. I'm sorry that the non-stop flight is not very popular, but then my trips back to N.C. will probably be fewer and farther between in future compared to the number of times I've flown over there since 2015. Only in a very abstract way have I yet realized that my mother really did give up the ghost on February 3. 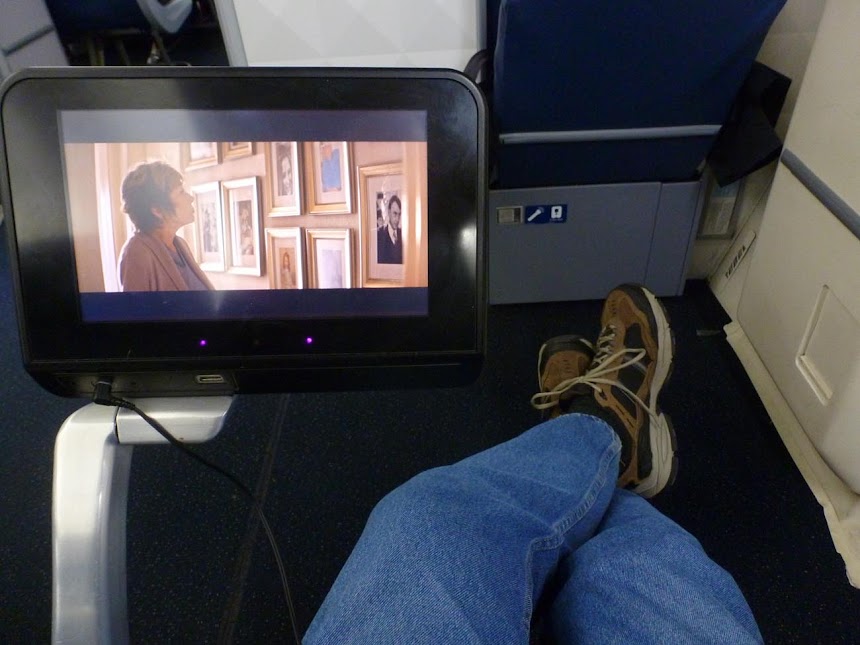 Before we even took off, I heard a flight attendant tell other passengers that as soon as the doors were closed, they could go and pick out more comfortable seats for themselves if they wanted to. I was in an aisle seat, close to the back end of the plane, and I considered staying there. Then I realized that four bulkhead seats (is that what they're called?), seats with no other seats in front of them and with all the legroom you could ask for, were unoccupied. I went and occupied one of them. Nobody sat on my left or on my right. My comfort was assured.

We landed early, then, at Paris CDG airport and pulled up to the gate at about 6:45 a.m. It was an "external gate" so we had to ride on a bus for 10 minutes to get into the terminal. Before landing, I realized I had a major allergy attack coming on. I had to wait at the airport until 11:19 for my TGV (the "bullet train") down to Tours and then the little local train to Saint-Aignan, with arrival at 2:01 p.m. Between landing at seven and getting home at two, I spent a miserable seven hours sneezing and wiping my nose and eyes.

It turns out that a big warm front was coming into France from the south, bringing a load of nasty pollen. This morning the temperature is nearly 50ºF (about 9ºC) outside, which is balmy by mid-February standards here. My trains yesterday were comfortable (not crowded) and fast, but I was under the weather. This morning I'm much better. That's the story here with my allergy attacks. Though intense, they seldom last more than 24 hours. I didn't wake up this morning until 5:20! Jet lag will surely set in today.
Posted by Ken Broadhurst at 07:00