I'm writing this post Monday afternoon, Paris time, because the French national weather service, MétéoFrance — as well as other weather forecasting organizations — are predicting that we will have 60 to 70 mph (100 to 115 kph) winds overnight. Who knows if we will have electricity and Internet access on Tuesday morning, which is when the worst of the storm is supposed to pass through. If we do, I'll leave a comment or something.

Several months ago, I re-read Jacques Pépin's autobiography, which contains a collection of recipes. One that I've made several times is Pépin's mother's easy egg and cheese soufflé. Sometimes I add chunks of bacon — lardons fumés — to it. The nice thing about this rustic soufflé is that you don't have to separate the eggs. You don't have to beat the egg whites. You just make it with whole beaten eggs. 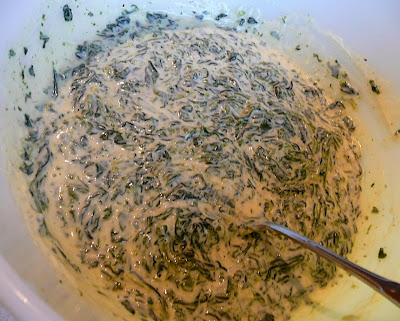 Béchamel sauce with cooked spinach
Yesterday (day before yesterday as you read this) I decided to make the Pépin soufflé with spinach. The recipe is very simple. First you make a béchamel sauce: Melt 4 tablespoons of butter in a pan. Cook one small onion, finely diced, in the butter if you want to. Then toss in 4 tablespoons of flour. Stir that around until the flour is all mixed with the hot butter and let it cook for two or three minutes. 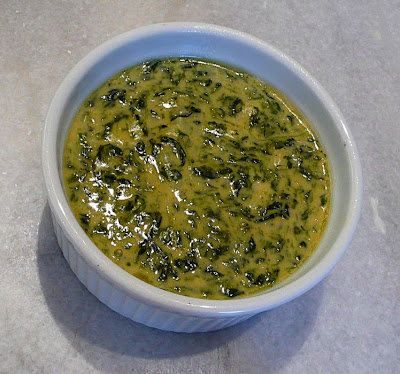 The spinach, béchamel, cheese, and eggs in a
buttered ramequin, ready to cook
At that point, pour in, all at once, 325 milliliters of milk (or a mixture of cream and milk, or U.S. half-and-half) and stir it over a hot flame until the sauce starts to thicken. Meanwhile, cook a pound of spinach (or a package of frozen spinach — 10 or 12 oz. or about 350 grams) in a pan or in the microwave. Add the cooked spinach to the béchamel sauce. Take it off the heat and let it cool for 10 or 15 minutes. 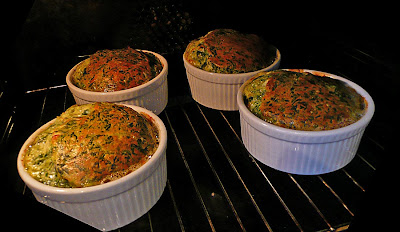 Here are the four little soufflés in the oven.
While waiting, grate cheese — cheddar or parmesan or Swiss — so that you have about a cup (half a pint). Break 4 eggs into a bowl and beat them lightly. When the sauce is cool enough, pour in the beaten eggs and the grated cheese. Season with salt, pepper, and a good pinch of grated nutmeg. Stir all that together. 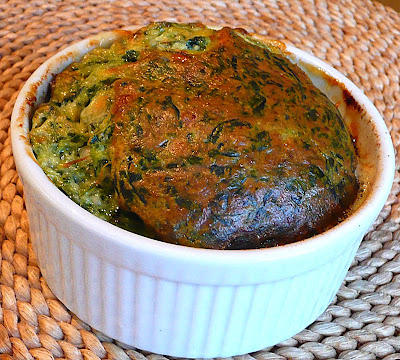 An easy spinach soufflé
Butter a baking dish or some individual ramequins and pour the egg mixture into them. Bake the mixture for 30 to 40 minutes in a 180ºC/350ºF oven until it puffs up and browns on top (several smaller dishes will get done faster than one larger dish).

Serve immediately, as with any other soufflé. If you let the cooked mixture cool, it will fall. But it will still be excellent. Serves 4 as an appetizer or two as a main course.

P.S. Up late (for me) — 11:05 p.m. The wind is picking up and I can't sleep. It just occurred to me that this post about a soufflé is weirdly appropriate since the French verb for the wind blowing is souffler — le vent souffle. We've got all our shutters closed and we're hoping no roof tiles blow off and no trees blow over.

P.P.S. 6:55 a.m. The wind has been roaring all night but it hasn't been as bad as some of the weather forecasting services said it might be. It's still dark outside so I don't know if any trees or limbs are down. I'll see in about an hour when I take the dog out.
Posted by Ken Broadhurst at 06:55