Blanquette de veau is another of those classic dishes — like bœuf bourguignon, choucroute garnie, coq au vin, cassoulet, or gratin d'endives au jambon — that Walt and I make at least once a year, and sometimes more often. All are wintertime specialties, a.k.a. comfort food.

All food, though, is comfort food to me. 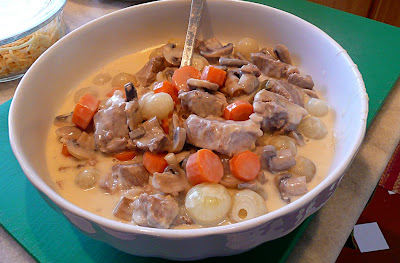 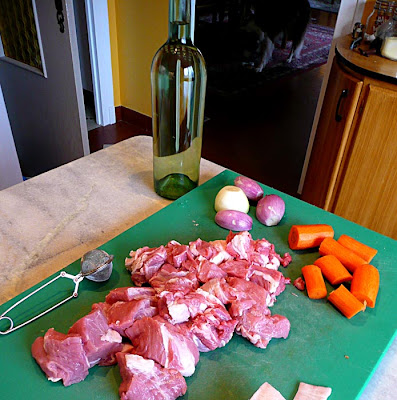 Cut the veal into chucks for stewing with aromatic vegetables.
You can put the spices and herbs in a tea ball to make
them easy to remove from the broth.
Blanquette de veau — white veal stew — is actually really easy to make. Of course, you need a couple of pounds of good, pale pink veal. The best cut of veal for the stew is the shoulder, and I usually buy a rolled, boned shoulder roast of veal when I want to make a blanquette. At the markets they also sell other, fattier cuts of veal — breast (poitrine, tendrons), neck (collier), or shank (jarret) — sometimes still on the bone. 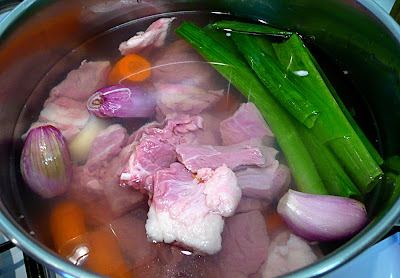 Here's the pot ready to put on the heat.
I added leek tops and shallots.
When you use cuts of meat with a lot of fat or bones, you probably get a very rich broth, but the standard recipe calls for cooking the meat and then trimming it of bone and fat before you put it in a white velouté sauce made with that broth. With veal shoulder, little or no trimming is necessary, and the price is only slightly higher for the leaner-but-tender shoulder roast.

As I said, it's an easy recipe. You just simmer chunks or pieces of veal in enought water to cover them with a pint of white wine added. Flavor the stew with a whole onion or two (or shallots), a couple of carrots cut into chunks, bay leaves, thyme, black pepper, salt, and either a clove or two or a half-dozen allspice berries. A stalk of celery and some leek leaves are good additions. At the beginning of the cooking time, skim off any foam that rises to the surface of the liquid. Let the pot simmer on low heat for two hours. 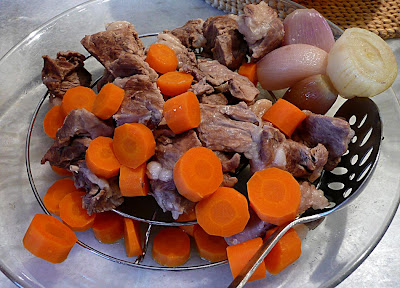 The meat and vegetables after two hours' cooking
in wine and water
Meanwhile, trim and wash half a pound of mushrooms and half a pound of pearl onions. To peel pearl onions, drop them in boiling water for two minutes and then put them in a cold water bath. When they're cool enough to handle, the skins will slip right off. If you can't get pearl onions, just coarsely chop a big yellow or white onion and use that. It won't look as pretty, but you'll have the flavor.

Here's what a veal roast looks like. Cut it in half with a
big knifeto remove the strips of fat and the string
before cutting up the meat.
After two hours, take the pieces of meat and the vegetables out of the broth and put them aside to cool. Trim the meat as much as you feel necessary. Discard the aromatic vegetables (or keep the carrots and celery if you want to add them to the final stew). You can do all this the day before and keep everything in the refrigerator overnight.

With the broth, make a velouté sauce — melt 6 tablespoons of butter in a pot and cook 6 tablespoons of flour in it for two or three minutes. Stir well, and then add a pint of the veal broth and stir the liquid constantly over high heat until the sauce thickens. Add a cup of liquid cream for richness and color, and add some more broth if necessary to get the consistency you want. 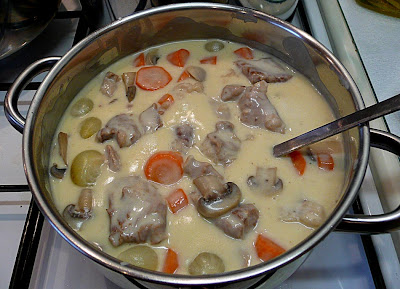 Stewed veal, vegetables, mushrooms, and pearl onions in a
velouté sauce make a blanquette de veau.
Then add the mushrooms and pearl onions to the sauce and let them cook at the simmer for 20 to 30 minutes. Try an onion to make sure it's done. When you're ready, add the veal and any vegetables you decided to keep and let it all heat through. It's ready to serve. One addition that really perks up blanquette de veau is a squeeze of fresh lemon juice at the last minute, or even at the table.

Blanquette is usually served with rice, but it's also good with pasta or boiled potatoes. You really need a green salad with a sharp vinaigrette afterwards to cleanse your palate.
Posted by Ken Broadhurst at 08:02