Last week, the Beaujolais Nouveau wines for 2009 were released to the public. They're the first wines made with grapes from the 2009 vintage, and it was a very good, dry, and warm growing season.

Another wine that was released at the same time is Touraine Primeur. That's our Loire Valley version of the same thing. After all, the main red grape grown both here in Touraine and over in Beaujolais is the same — it's Gamay. There a weekend events in Tours and Montrichard, and maybe elsewhere, to celebrate the release of the new vintage. 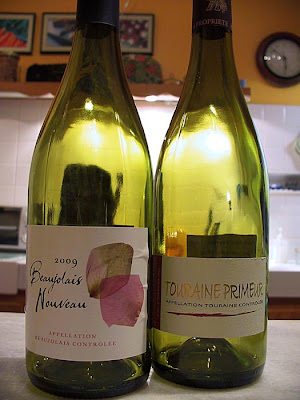 Two cadavres, which means empty wine bottles
We bought a bottle of each wine, just to compare them. I'm not sure I could say which was better, even though they were slightly different. As you can see, the bottles are empty. Of course, we bought them last Thursday...

A vin nouveau (new wine) or vin primeur is a wine released in the same year that the grapes were harvested. It can also be called vin jeune (young wine) or vin de l'année (this year's wine). Such wine is light-bodied, and may contain a little residual sugar, so it is slightly sweet. Nobody has ever claimed that the nouveau or primeur wines are the most refined and subtle of beverages. They need to be consumed reasonably quickly, and certainly not kept long-term in a cellar. 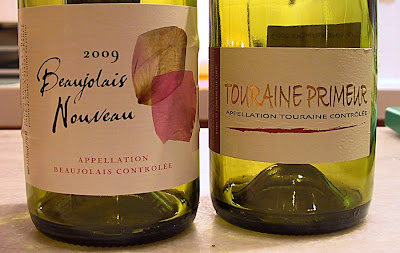 A closer view of the labels
There are 55 appellations (AOC areas) that can produce vin primeur en France. Most is not exported, with the big exception being Beaujolais. Primeur wine can be red, white, or rosé, with different ones authorized in different AOCs.

Such wines were traditionally for local enjoyment, but the Beaujolais marketing people changed that 30 or 40 years ago, when they went into vins nouveaux in a big way. The release date is usually in mid- to late November, two months after the harvest. At that point, the fermentation is complete. How about a piece of Fourme d'Ambert cheese from Auvergne
with that glass of Touraine Primeur wine?
By the way, we had a very blustery day yesterday and that weather seems to be continuing today. Yesterday afternoon, rain was beating in under the back door, and we could even hear it dripping into the attic at one point. There doesn't seem to be any damage. A strong west wind was pushing water up under the roof tiles, I think. 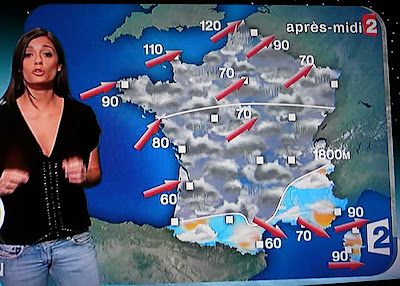 The weather forecast for this afternoon doesn't look great.
The red arrows show winds from 40 to 70 mph in places.
The good news is that most days this month, temperatures have stayed unseasonably mild. We've only had one or two cold mornings. Low temperatures have hovered around 8 to 10ºC (47 to 50ºF), with afternoon highs around 13 and 17ºC (57 to 65ºF). That's well above normal for the region. But November has been extremely wet.
Posted by Ken Broadhurst at 07:54