I mentioned pork belly the other day, and thought about how we don't really use that name for the cut of meat we call bacon. The name sounds rural and old-fashioned. You'd eat pork belly or hog jowls with corn pone and black-eyed peas, right? At least I would, and I'd be happy...

Maybe people don't want to know where bacon comes from. Still, bacon is such an ambiguous term, because in America what we call bacon is called "streaky bacon" in other countries, and bacon is something else entirely — it comes in "rashers," which we just call "slices." And then there's Canadian bacon, which is also known as back bacon. Anyway, pork belly — poitrine de porc — is such an essential ingredient in French cooking that I want to write about it. 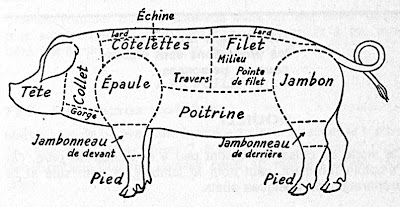 In this illustration of cuts of pork that I found in an old
cookbook, it's clear that the poitrine is what we call the belly.
I read this in the Joy of Cooking (1997):

Bacon is made from trimmed hog bellies, also called sides, that have been cured in brine and then smoked until partially cooked... Unsliced bacon, or slab bacon, is usually found in specialty stores and is ideal anytime you want thick pieces, which the French call lardon.

That should be lardons, with an S. One lardon wouldn't take you far or give much flavor to anything. It makes me thing of escargot, which you often see as a collective singular in English. That always makes it look, to me, as if the person who wrote about having escargot for dinner only ate one! He'd still be hungry, don't you think. In French, you eat escargots, plural, when you eat them. 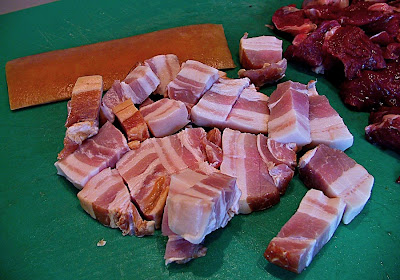 Lardons cut from lard maigre fumé — smoked pork belly
In Harold McGee's book On Food and Drink: The Science and Lore of the Kitchen, there's this:

Bacon is largely fat tissue from the belly, while back fat is the preferred fat for making sausages... In classic French cooking, pork fat is used to provide both flavor and succulence to lean meats.

And from the Larousse Gastronomique:

Another name for slab bacon in Southern U.S. English is "side meat" — as the Joy of Cooking says, hog bellies are also called "sides." The fat of the hog is also sold as "fatback," "salt pork," or "streak-of-lean" in America. Some is salted (or brined) and smoked, and some is just salted — just like in France. 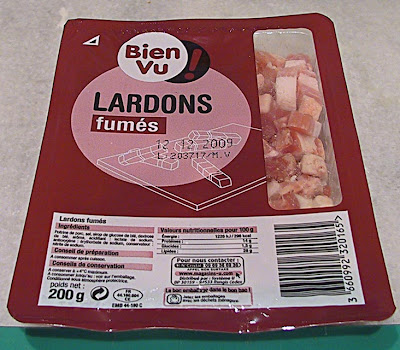 Lardons packaged this way — fresh, salt-cured,
or smoked — are sold in all the supermarkets.
Actually, in French "fatback" is called « lard gras ». It is taken from from the upper part of the hog, along the backbone. It's very fatty (gras). American "lard" is produced by rendering the fatback — in other words, cooking it slowly until it melts and then straining any solid pieces out of the liquid fat.

The problem with commercially available lard is that is usually adulterated with "hardeners" to make it remain solid at room temperature. It's no longer a natural product. What we call "lard" is called « saindoux » in French. The term « lard » in French, remember, applies to solid pieces of pork — either "fatback" or "bacon."

The pork belly, or poitrine, which literally means "breast," gives what is called « lard maigre » — lean bacon. Lard is the meat that lardons are usually cut out of — what we call bacon, or streaky bacon if you're not American. It's all very confusing when you are an English-speaker. In Italy, it's called pancetta. 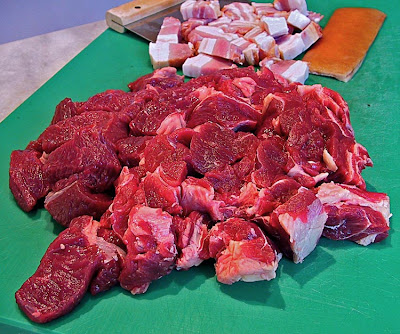 Lardons are used to add flavor and texture to dishes made
with very lean meats, including chicken, rabbit,
and the grass-fed beef available in France.
All this is important because lard and lardons are essential ingredients in French country-style cooking, and to some extent in what is called « haute cuisine » — fancy restaurant cooking. Without lardons — little chunks of smoked bacon — you'd have no traditional bœuf bourguignon, coq au vin, civet de lapin, or quiche lorraine.

All those standard dishes of French cooking depend on bacon and wine, along with onions and herbs, for their flavor, along with the main ingredient, be it beef, chicken, rabbit, or eggs. And how many good French pizzas, omelettes, and salads would we have to live without if we didn't have lardons?

Don't forget petit salé aux lentilles — lentils cooked and served with salt-cured bacon. It's a classic of traditional French cooking, an iconic dish. Petit salé is a form of lard, a.k.a. poitrine de porc — bacon. It's salt-cured, but much leaner and tastier than the salt pork that you find in the U.S.

In France, you can also buy big slabs of pork belly that are just lightly brined. Cuts of pork so prepared are called porc demi-sel — half salted. They are not so salty that you have to soak or blanch them in fresh water before cooking them. They're usually boiled with vegetables like carrots, turnips, cabbage, onions, and potatoes. The salt gives the meat and resulting broth a deeper flavor than would fresh, unsalted, unsmoked pork. 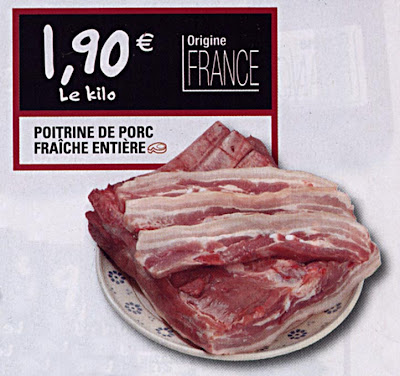 Fresh pork belly is on special at Intermarché this week.
I think people buy it to make their own rillons and
rillettes, which will keep over the winter.
Fresh pork belly or poitrine de porc is also widely available in France — I'm not sure I've ever seen it in the U.S. And fresh pork belly is the basis for two of the essential pork specialties of the Loire Valley, especially the old Touraine province. Those are called rillons and rillettes.

Rillons are chunks of pork belly — fresh bacon (as opposed to salt-cured or smoked) — that are slow-cooked in pork fat (lard — saindoux in French) until they are tender and succulent. It's the same process used farther south to make confit de canard — duck legs and thighs slow-cooked in melted duck fat.

Rillons are sold in all the markets, shops, and supermarkets in Touraine, including Blois and Saint-Aignan. You can eat them cold the way you would eat cold roast pork or ham, or you can use cook them with vegetables, including cabbage, green beans, and beans, for flavor and seasoning.

The other Touraine speciality (also a specialty of the city of Le Mans, to the north) is rillettes. These are made with the same meat — fresh, uncured poitrine de porc a.k.a. lard maigre — or other lean cuts of pork. The idea is to cook the meat in a mixture of fat and liquid — Vouvray white wine, for example — so long that the meat starts to fall apart. You can help the process by mashing and stirring the meat with a wooden spoon or a pestle.

When it's cooked, you drain the meat and then add back in enough fat so that when it cools it has a spreadable consistency. You eat rillettes cold, on bread, nearly always accompanied by the little sour French gherkin pickles called cornichons — the same way you eat pâtés of all different kinds in France.

Pork belly in all these forms is a staple, everyday product here in the Loire Valley.
Posted by Ken Broadhurst at 07:49